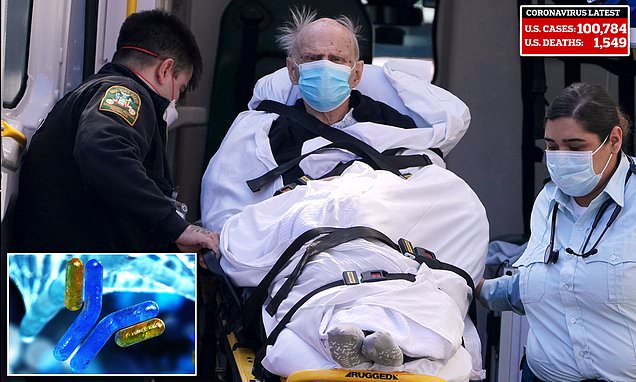 Two coronavirus patients in New York City were treated with a new drug ‘fast-tracked’ for HIV and breast cancer – and they went from being on ventilators in the ICU to regular hospital in a matter of days.

Based on the results of a small initial trial, biotech firm CytoDyn believes their drug, leronlimab, has potential for treating patients severely ill with coronavirus.

They believe that the drug can quell the ‘cytokine storm’ – a deluge of immune cells that can be as damaging as the infection itself – that triggers life-threatening lung inflammation in coronavirus patients.

Leronlimab has only been tested in seven critically ill patients thus far, but two are now free from ventilators, and another two more show signs that the severe inflammation sending their lungs into organ failure are subsiding.

There are no approved treatments for coronavirus, but the CytoDyn’s drug is among the latest being tested to help save the lives of Americans with coronavirus, of which there are now well over 100,000 – and if it continues to show promise it could get FDA approval in as little as little as six weeks. 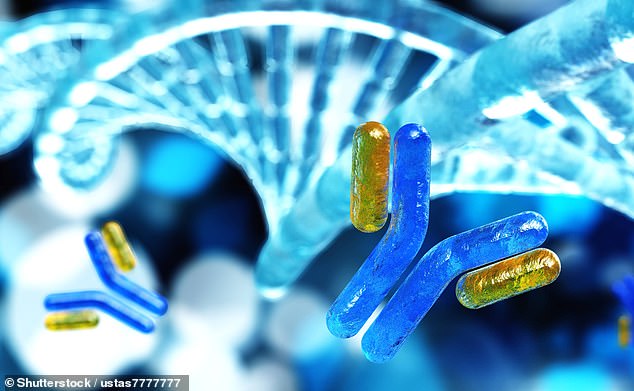 Leronlimab, a drug under development for HIV and cancer, seems to combat the ‘cytokine storm’ blamed for devastating lung inflammation in coronavirus

Developing a drug that targets the coronavirus itself take time and money – both of which are in short supply in the face of the COVID-19 pandemic.

Scientists, universities, and the World Health Organization are all racing to test existing drugs or those in development against the virus that has already killed more than 1,500 Americans.

Among those is a drug that has already been fast-tracked by the US Food and Drug Administration for treating another virus – HIV – as well as cancer.

Leronlimab is already in trials and showing promise for treating HIV.

But scientists CytoDyn think that their drug’s benefit for coronavirus patients is not an antiviral one.

What’s killing coronavirus patients is a complication of the virus: pneumonia.

The virus binds to lung cells, and the immune system kicks into high gear to fight the infection with every weapon it has, despite the fact that we do not have antibodies specific to COVID at the ready.

This flood of immune cells, including cytokines – the immune system’s communication system. 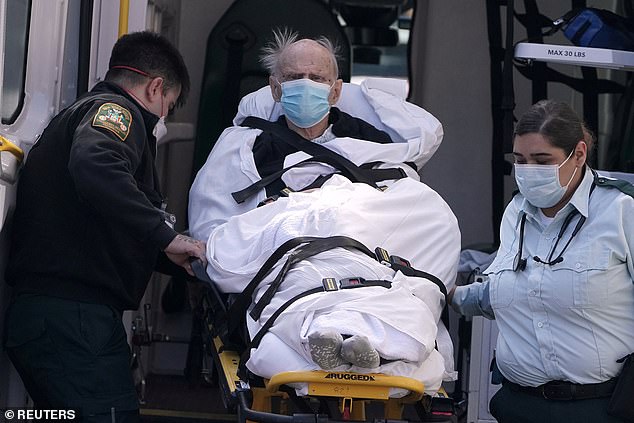 In New York, more than 1,000 US patients are critically ill, and need ventilators. Seven have been treated with leronlimab, and all but one has shown improvement. Pictured: a patient loaded into an ambulance amid New York’s outbreak

Cytokines tell the immune system to send a deluge of chemicals from white blood cells to attack the infection, causing inflammation.

When inflammation gets out of control and fluid starts to fill the alveoli in the lungs, a patient develops pneumonia.

In the case of many of the sickest coronavirus patients, this leads to acute respiratory distress syndrome (ARDS), a condition that requires ventilation, and even then can prove fatal.

Leronlimab interrupts this domino effect by calming the cytokine storm.

It’s not entirely clear how the drug does this, but it’s a phenomenon that CytoDyn has seen not only in its first small set of coronavirus patients but in 840 HIV patients who saw significant reductions in their levels of inflammation. 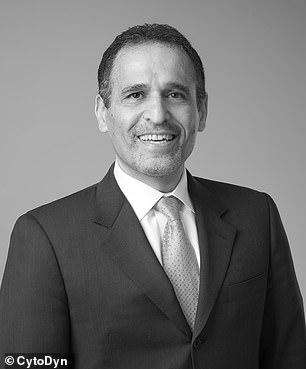 CytoDyn president Dr Nader Pourhassan said that if the drug continues to show promise, it could get emergency approval in a matter of weeks

For their COVID-19 trial, doctors at a New York hospital gave the drug to seven severely ill coronavirus patients.

The drug is given via two injections – one on each side of the abdomen.

For the first patient, a person in their 70s, improvements came almost immediately, and were considerable, from what the doctor overseeing the trial told the company’s president.

‘One of [the patients] self-extubating,’ meaning they removed their own ventilator tube, ‘and was alert an hour or two after treatment,’ CytoDyn president Dr Nader Pourhassan told DailyMail.com.

‘The doctor said that this patient, in the last three days before treatment, was intubated and extubated and every time they intubated him, within four to six hours they immediately had to intubate him again.’

Since the patient pulled out their own breathing tube, they’ve been doing well and has been off the ventilator.

This patient as well as the second patient treated have both now been taken off a blood pressure drug that was being used to help them cope with the distress of COVID-19 too.

Three days after the first injections of leronlimab were given, bloodwork from these and two other patients showed that the cytokine storm was subsiding.

A second dose of leronlimab was given a week after the first. 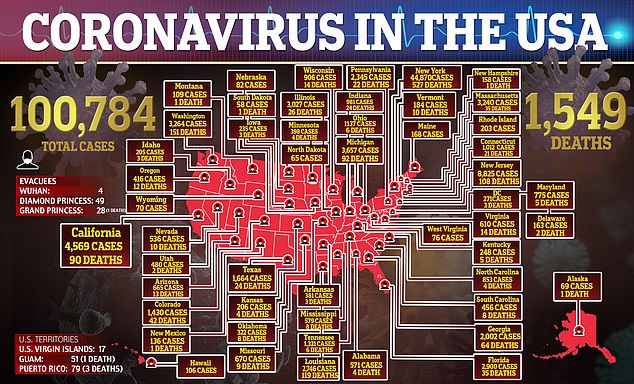 New Yorkers now comprise more than half of the more than 100,000 Americans with coronavirus, fueling particular anxiety in the state of more than eight million residents

All but one of the patients have so far been steadily improving.

Dr Pourhassan says that the company is less than two weeks from turning in all their filings to the FDA for approval of leronlimab for HIV treatment.

The drug’s fast-tracked status means it could be approved for HIV in as little as six months, but the FDA has also already asked for a second protocol to approve leronlimab for further coronavirus testing.

CytoDyn is set to give the drug to another 75 patients with mild or moderate coronavirus, and if they, like the first set of patients, show signs that ‘the cytokine storm goes down and the patient is not having a problem clearing the virus…it could get FDA-approval very quickly,’ said Dr Pourhassan.

The doctor running the trial in New York – who must remain anonymous until the FDA  says the hospital and doctor’s name can be revealed – told Dr Pourhassan drugs showing promise for coronavirus could be approved in as little as six weeks.