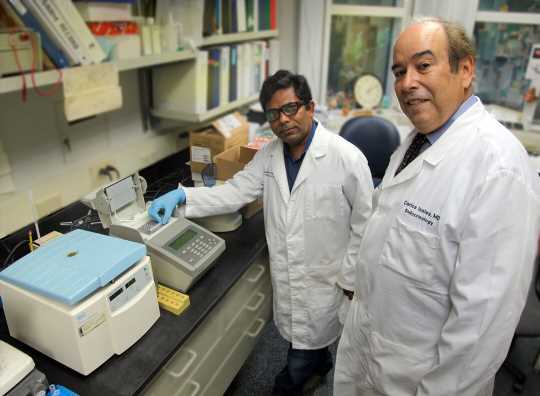 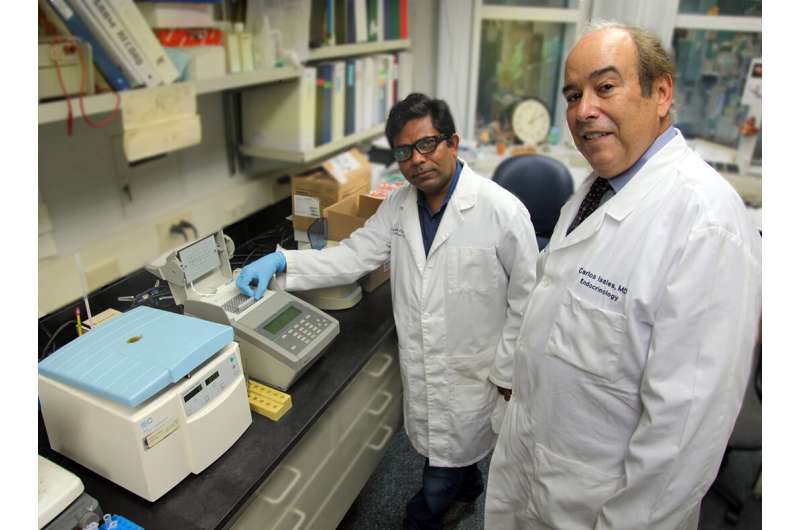 With age, a diet lacking in the essential amino acid tryptophan—which has a key role in our mood, energy level and immune response—makes the gut microbiome less protective and increases inflammation body-wide, investigators report.

In a normally reciprocal relationship that appears to go awry with age, sufficient tryptophan, which we consume in foods like milk, turkey, chicken and oats, helps keep our microbiota healthy.

A healthy microbiota in turn helps ensure that tryptophan mainly results in good things for us like producing the neurotransmitter serotonin, which reduces depression risk, and melatonin, which aids a good night’s sleep, says Dr. Sadanand Fulzele, an aging researcher in the Medical College of Georgia Department of Medicine.

But in aged mice, just eight weeks on a low-tryptophan diet results in some unhealthy changes in the trillions of bacteria that comprise the gut microbiota and higher levels of systemic inflammation, they report in the International Journal of Molecular Sciences.

Diet has been directly linked to microbiota composition in humans and rodents, they write, and they were able to document impactful shifts.

For example, when tryptophan levels are low, the MCG investigators found lower levels of Clostridium sp., the bacterium that metabolizes the essential amino acid enabling production of good products like serotonin in the gut, and a threefold increase in the bacterium Acetatifactor, which is associated with intestinal inflammation.

“We think the microbiome plays an important role in the aging process and we think one of those players in the aging is tryptophan, which produces metabolites that affect every organ function,” says Dr. Carlos M. Isales, co-director of the MCG Center for Healthy Aging and chief of the MCG Division of Endocrinology, Diabetes and Metabolism. “We also have evidence that the composition of the bacteria that utilize tryptophan changes so even if you eat more tryptophan, you may not use it correctly,” he says.

Fulzele and Isales are co-corresponding authors of the new study further exploring the relationship between tryptophan, the gut microbiome and the inflammatory response, in which they fed the aged mice three different diets for eight weeks—diets that were deficient, had recommended levels and high levels of tryptophan.

In the face of low tryptophan, they saw both a direct and indirect impact on the microbiota. These included changes like reduced levels of the bacterium Mucispirillum and Blautia, which play a big role in maintaining microbiota health in humans and animals. Some of these bacteria also have been found to be significantly decreased in patients with Crohn’s and colitis, where inflammation can be rampant. Mucispirillum, for example, resists oxidative “bursts” associated with inflammation and produces numerous factors associated with reducing reactive oxygen species and consequently inflammation.

It was the unhealthy changes they saw in the microbiota that made Fulzele, Isales and their colleagues also suspect increased release of inflammation-promoting signaling molecules called cytokines, hypothesizing that microbiota changes might induce release of the molecules body-wide. They looked specifically at the largely inflammation-promoting IL-17 and IL-1a as well as IL-6 and IL-27, which can both promote and suppress inflammation, in the blood of mice on a low tryptophan diet. They found significant increases of IL-6, IL-17A and IL-1a and a significant decrease in IL-27, a cytokine which prevents transcription of inflammation-invoking IL-17 and helps do things like increase regulatory T cells in the gut, which suppress inflammation. Conversely, mice on a tryptophan-rich diet had higher levels of the calming IL-27.

Generally the low-tryptophan diet set the stage for inflammation body-wide, the investigators say.

When the aged mice resumed a healthy tryptophan intake, some of the unhealthy changes resolved in just a few days, Fulzele notes. But the reality that just increasing tryptophan did not always correct problems, and that some tryptophan metabolites are actually harmful, provides more evidence that a better option is giving select metabolites early on to help keep the microbiota functioning optimally, rather than attempting a tryptophan rescue, the investigators say.

Their current work is further exploring what a good metabolite mix would look like. “We want to define what products that the gut generates that are good versus bad,” Isales says.

Each human has a unique microbiota that results from our birth mothers, and can change based on what we consume, breathe in or are otherwise exposed to over time. It is generally considered an organ system that enables us to digest food and has a key role in the immune response and our overall health. The microbiota also should help protect us from the ill effects of environmental exposures at all ages, and from the ravages of aging itself, Isales says.

Those ravages can include a reduced sense of smell, taste and appetite, and related dietary changes like inadequate or poor nutrition. Also, stem cells throughout the body, which are designed to keep us functioning at a premium by repairing or replacing dysfunctional cells, become less functional because of the cumulative effect of toxins we are exposed to. In a bit of a vicious cycle, our body systems become less efficient, most of us lose lean muscle mass and gain fat, which produces inflammatory molecules, and our weight shifts around so we store more of that fat in and around our abdominal area where it tends to be the most inflammatory and lethal. Fat is also less efficient than lean muscle at burning calories so our metabolism slows, which should in theory slow aging, but in the face of other changes mostly cannot.

“Basically your immune system has been dysregulated, you have continued inflammation from damaged tissue by the processes that normally keep you healthy,” Isales says as chronic inflammation can replace the classic episodic immune response that fights infection and enables healing.

What Isales calls this “unnatural” process of aging, is associated with chronic disease conditions like impaired digestive health, declining cognitive function and a compromised immune system, and he and Fulzele agree that the gut microbiota is a significant modulator of these.

“We accept as normal that your organs stop working as well. We accept that the ejection fraction of your heart drops as you get older. We accept that your brain function decreases as you get older. We accept as normal what is not normal,” says Isales, who along with Fulzele and their other colleagues in the MCG Center for Healthy Aging want to help reestablish for most of us what they consider the ability to live a significantly longer, and healthier life.