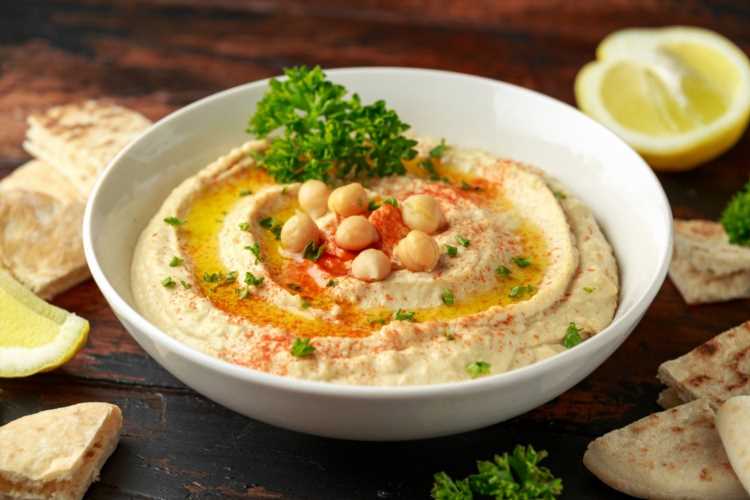 When you find yourself pregnant, the do’s and don’ts of skincare and eating are to be studied with careful attention. The lotion you once smeared on your skin might suddenly contain an ingredient that’s not deemed pregnancy-safe, while certain foods you loved to indulge in carry with them potential harms. It can be exhausting work just doing the grocery shop. Though most have known to avoid foods like sushi and soft cheeses when pregnant, now pregnant women are being urged to avoid fresh, unpasteurised juice and products with tahini, such as hummus, after the Food Standards Australia and New Zealand received an advice update.

It might be surprising that hummus should be included on the list of foods to avoid, not least because we love to snack on it with carrots and cucumber, but as it turns out, these foods are believed to cause a kind of food poisoning caused listeria, which can spread from the gut to the placenta in pregnant women.

Juices present a number of challenges, particularly if they are unpasteurised. If they are pressed or blended and presented ready-to-drink, scientists believe they pose a risk to pregnant women. As Julian Cox, UNSW associate professor of Food Microbiology, told The Morning Show, “The average healthy adult, no problem at all. But when it comes to pregnancy and listeria, which can infect at low dose and have severe outcomes, it’s really best to avoid them.”

What You Need to Know About Endometriosis and Your Fertility

Juices that are made fresh or ‘cold pressed’ shouldn’t be consumed if you’re pregnant, but packaged and pasteurised ones are OK to drink if you’re expecting. As for the tahini, there have been several outbreaks of salmonella with tahini and products containing it, which is why researchers urge pregnant women to avoid it. “Food poisoning during pregnancy generally has more severe outcomes than for the average healthy adult,” Cox explained.

Symptoms of listeria include a mild fever, headache, nausea, and diarrhoea, while the more serious cases can develop meningitis (swelling around the brain) or encephalitis (brain infection). As the Department of Health website suggests, “Pregnant women generally experience mild symptoms themselves; however infections during the pregnancy can lead to miscarriage, stillbirth, or infection of the newborn baby.”

The website adds, “Symptoms usually start between three to 70 days after eating food contaminated with the bacteria.”

If you are expecting, the main rule of thumb is to wash fresh produce thoroughly and store food at a temperature under 5 degrees Celsius. Food should be cooked well (don’t eat runny eggs) and leftovers shouldn’t be consumed after 24 hours.