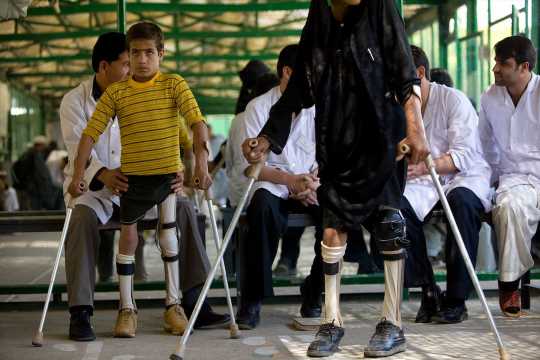 In the early 1950s, two prominent medical researchers each found a way to protect the world from poliomyelitis, the paralysis-causing disease commonly known as polio. The vaccines created by Dr. Jonas Salk and Dr. Albert Sabin resulted in the near-global eradication of polio. Here’s how they did it.

Polio is a disease caused by three variants of the poliovirus, according to a 2012 review written by microbiologist and polio expert Anda Baicus and published in the World Journal of Virology. The virus, which only infects humans, can damage the neurons that control movement, resulting in partial or complete paralysis. A person can become infected with the virus by consuming contaminated food or water, or by allowing contaminated items (such as dirty hands) to touch or enter the mouth, according to the Centers for Disease Control and Prevention (CDC).

Studies of Egyptian mummies suggest that polio affected children at least as early as ancient times, but the U.S. didn’t experience its first polio epidemic until the late 1800s. In the U.S. in 1916, more than 27,000 people were paralyzed by the disease and at least 6,000 people died from it, according to History.com. For the next several decades, the epidemic expanded throughout the U.S. and Europe. In 1952 alone, there were 58,000 new cases of polio and 3,000 deaths from the disease in the U.S.

As medical experts worked to understand the virus, they discovered that it could infect people without causing symptoms. In a 1947 study published in the American Journal of Hygiene, researchers reported that the prevalence of poliovirus in New York City sewage water meant that there were an estimated 100 asymptomatic cases of polio for every symptomatic, or paralytic, case of the disease at the time. Today, more recent research suggests that 72 out of 100 people who are infected with the virus will never experience symptoms, and about 1 in 4 infected people will experience only flu-like symptoms that last between 2 and 5 days before going away on their own, according to the CDC.

Development of the Salk vaccine

Researchers began working on a polio vaccine in the 1930s, but early attempts were unsuccessful. An effective vaccine didn’t come around until 1953, when Jonas Salk introduced his inactivated polio vaccine (IPV).

Salk had studied viruses as a student at New York University in the 1930s and helped develop flu vaccines during World War II, according to History.com. In 1948, he was awarded a research grant from President Franklin D. Roosevelt’s National Foundation for Infantile Paralysis, later named March of Dimes. Roosevelt had contracted polio in 1921 at age 39, and the disease left him with both legs permanently paralyzed. In 1938, five years into his presidency, Roosevelt helped to create the National Foundation for Infantile Paralysis to raise money and deliver aid to areas experiencing polio epidemics.

Researchers began working on a polio vaccine in the 1930s, but early attempts were unsuccessful. An effective vaccine didn’t come around until 1953, when Jonas Salk introduced his inactivated polio vaccine (IPV).

Salk had studied viruses as a student at New York University in the 1930s and helped develop flu vaccines during World War II, according to History.com. In 1948, he was awarded a research grant from President Franklin D. Roosevelt’s National Foundation for Infantile Paralysis, later named March of Dimes. Roosevelt had contracted polio in 1921 at age 39, and the disease left him with both legs permanently paralyzed. In 1938, five years into his presidency, Roosevelt helped to create the National Foundation for Infantile Paralysis to raise money and deliver aid to areas experiencing polio epidemics.

Thanks to the work of researchers before him, Salk was able to grow poliovirus in monkey kidney cells. He then isolated the virus and inactivated it with formalin, an organic solution of formaldehyde and water that is commonly used as a disinfectant and embalming agent. A similar procedure had been tested years prior, in 1935, by American scientist Maurice Brodie, in which he extracted poliovirus from live monkey spinal cord tissue and then suspended the virus in a 10% formalin solution, polio expert Baicus wrote. Brodie tested his vaccine on 20 monkeys and then on 300 schoolchildren, but the results were poor and Brodie didn’t test any further.

Salk’s vaccine was unusual because instead of using a weakened version of the live virus, such as what is used for mumps and measles, Salk’s vaccine used a “killed,” or inactivated, version of the virus. When the “dead” poliovirus is injected into the bloodstream, it can’t cause an infection because the virus is inactive; but the immune system can’t distinguish an activated virus from an inactivated one, and it creates antibodies to fight the virus. Those antibodies persist and protect the person from future poliovirus infection.

In 1953, Salk began testing his inactivated polio vaccine (IPV) on a small number of former polio patients in the Pittsburgh area and on himself, his wife and their three sons. The initial results were promising, and he announced his success on the CBS national radio network on March 25, 1953, according to History.com. He became an instant celebrity.

The first large-scale clinical trial of Salk’s vaccine began in 1954 and enrolled more than 1 million participants. It was the first vaccine trial to implement a double-blind, placebo-controlled design — now a standard requirement in the modern era of vaccine research, according to Arnold S. Monto’s 1999 review published in the journal Epidemiological Reviews.

The scientist leading the vaccine trial, Dr. Thomas Francis, Jr. from the University of Michigan, announced the positive results at a press conference on April 12, 1955. Later that same day, the U.S. government declared Salk’s vaccine safe and effective for use, according to The College of Physicians of Philadelphia’s History of Vaccines.

After the press conference, CBS reporter Edward R. Murrow asked Salk who owned the vaccine. “Well the people, I would say,” Salk famously answered. “There is no patent. Can you patent the sun?” Salk never patented his vaccine.

Only a few weeks later, reports began surfacing of children experiencing paralysis after receiving the vaccine. More than 250 new polio cases were traced back to batches of the vaccine made by Cutter Laboratories, according to the CDC. The batches had contained live, active strains of poliovirus.

The U.S. Surgeon General halted all polio vaccine administration until all manufacturers could be investigated and verified for safety. At the time, there had been little government regulation over vaccine manufacturers, but that quickly changed after what is now known as the Cutter Incident. Since then, not a single case of polio has ever been attributed to the Salk vaccine.

While Salk was developing his inactivated polio vaccine, his professional rival, virologist Dr. Albert Sabin at the University of Cincinnati, was working on a vaccine made with active, but weakened, virus. Sabin opposed Salk’s vaccine design and considered an inactivated virus vaccine to be dangerous.

By 1963, Sabin had created an oral live-virus vaccine for all three types of poliovirus that was approved for use by the U.S. government. Sabin’s version was cheaper and easier to produce than the Salk vaccine, and it quickly supplanted the Salk vaccine in the U.S. In 1972, Sabin donated his vaccine strains to the World Health Organization (WHO), which greatly increased the vaccine’s availability in low-income countries.

Sabin’s oral polio vaccine (OPV) was critical for helping to decrease the number of polio cases globally, but unlike the Salk vaccine — which carries no risk of paralysis — the OPV carries an extremely small risk of causing paralysis. Today, the WHO estimates that about 1 in 2.7 million doses of OPV result in paralytic polio.

Since 2000, Salk’s inactivated polio vaccine is the only version administered in the U.S., in order to avoid any risk of vaccine-induced polio associated with OPV. The OPV is still administered in many parts of the world, but the WHO’s Global Polio Eradication Initiative aims to cease the administration of OPV altogether once wild (non vaccine-related) polio is completely eradicated.

The CDC now recommends children receive four doses of IPV, one each at ages 2 months, 4 months, between 6 and 18 months, and between 4 and 6 years. Thanks to widespread use of the polio vaccine, the U.S. has been polio-free since 1979. Globally, cases of polio due to wild poliovirus have decreased by 99% since 1988, according to the WHO, from an estimated 350,000 cases per year to just 33 new cases in 2018.