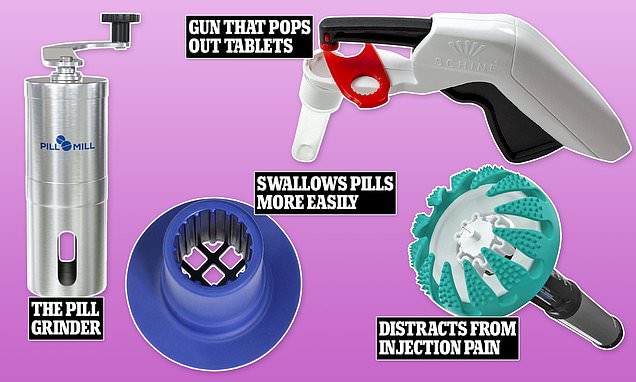 Almost half of all adults in England took at least one prescribed medicine in the past week — and for many, taking it is not simple. But there’s an array of gadgets that claim to help make taking medication easier.

Adrian Monti asked Ben Merriman, a clinical pharmacist in Cumbria, and Mohammed Hussain, a community pharmacist in Dewsbury, West Yorkshire, to assess a selection. We then rated them.

Claim: This handheld gun pushes ‘tablets easily and quickly from a blister pack’, the maker says. You place a blister pack under the flexible pad on the end of the device and pull a trigger, which presses the pad onto the pill, pushing it out.

Expert verdict: Ben Merriman says: ‘Blister packs can be very fiddly for people with dexterity issues such as those with rheumatoid arthritis, osteoarthritis, carpal tunnel syndrome or a neurological condition such as multiple sclerosis or Parkinson’s. So this gadget might benefit those patients in particular.

‘But if you struggle with this, your pharmacist can take pills out of blister packs for you and put them into containers which are easier to access.

‘While this looks a fairly simple device to use, it might not be helpful for all medicines such as those that come in metal-backed blister packs, which need to be peeled back rather than the pills ‘popped’ out.’ 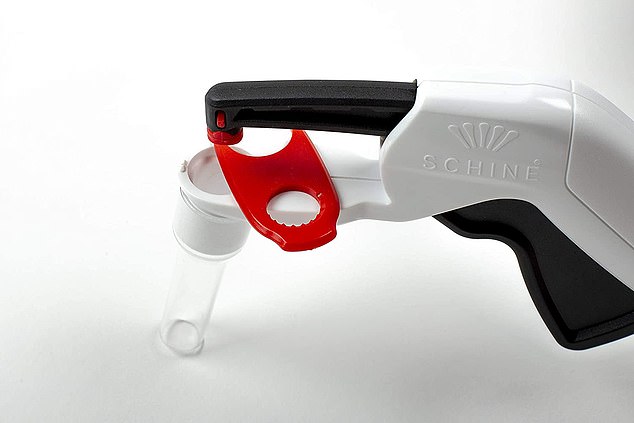 Claim: This plastic tray has four rows of seven boxes, for each day of the week and different times of each day — e.g. morning, noon — on each lid. Its digital timer can then be programmed with a voice alert, such as: ‘Please take your morning pills for the 20th.’

Expert verdict: Mohammed Hussain says: ‘We call these types of products compliance aids; they are designed to contain individual doses of medicines to be taken at certain times. There’s a real issue with many patients not taking medicines how they should or when they should.

‘So in some ways this kind of device is good, but I think this one is much too expensive for what is essentially a pill tray and a timer.

‘I could also see mistakes being made in managing so many pills that are unlabelled and not in their original packaging. If you have a smartphone, you could just set alarms on that.

‘Or, a pharmacy can make up a box with all the medicines in separate compartments at no extra cost [known as a dosette box]. In these boxes, each slot is sealed under plastic (so it’s easy to see if the tablet has been taken) and carefully labelled, with size and colour, for example, so a non-health professional can easily identify which is which.’

Claim: This set contains two pairs of stainless-steel bladed scissors. The blades allow a square, oval, round or rectangular-shaped pill, with a diameter between 5mm and 10mm, to be evenly cut in half, thirds or quarters.

Expert verdict: Ben Merriman says: ‘As some medications are not available in smaller doses, for example when a 5mg tablet may be the lowest strength available but a 2.5mg dose is needed, making them smaller yourself may be necessary. (Especially if they need to be kept in the packaging as long as possible to stop them becoming less effective due to light, air and moisture.)

‘Cutting up pills is not ideal, but specialist scissors like these might be the least bad option as they’ll provide a pretty accurate cut.

‘Be aware that tablets with an enteric coating [to protect them from stomach acids degrading them] or medicines designed to release doses gradually should not be split: only cut up tablets which have a marking on them, a line across the middle for instance, which indicates they can be reduced in size.

‘A product like this is much safer and more accurate than using, say, kitchen scissors. However, discuss with your pharmacist if you’re unhappy about cutting up pills.’

Claim: This stainless-steel device is about the size of a pepper grinder. You can place up to 50 tablets into the cylinder, close the lid and turn the long crank handle to grind down the pills into a fine powder. Its maker says ‘there is no effort or force necessary to use our tablet crusher resulting in a fast and smooth grind, perfect for people with arthritis’.

Expert verdict: Mohammed Hussain says: ‘Grinding down pills is dangerous. For instance, many tablets have a shiny, enteric coating, so the medicine is only released when it reaches the small intestine. This coating would be destroyed by grinding.

‘Also many tablets, such as those containing morphine, are designed to slowly release the medicine so the patient does not get one big ‘hit’. By grinding them down, this vital feature would be destroyed.

‘The fact it can accommodate so many pills also makes it very dangerous as you can’t control the dose. I would urge people never to grind their pills — if you struggle to take your pills, ask your pharmacist about having them in liquid form.’ 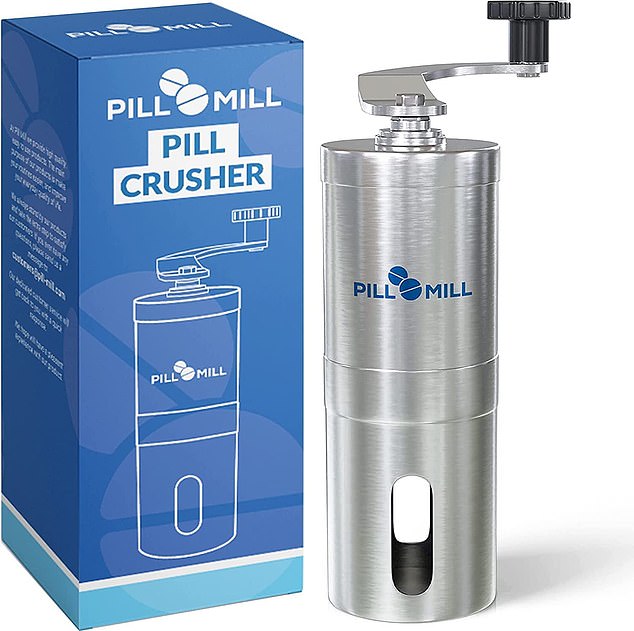 Claim: Designed for ‘anyone with swallowing difficulty, dysphagia, or who dislikes that pill taste’, this reusable plastic spout screws on to most conventional water bottles. A pill can be placed inside the spout, and when the user takes a swig, they also swallow the pill.

Expert verdict: Mohammed Hussain says: ‘Swallowing tablets or capsules for some people can be a real problem, but I don’t think this expensive spout is really a solution.

‘As soon as many tablets come into contact with water, they start dissolving, making antibiotics, such as metronidazole, taste metallic, making you gag. This spout will only get the tablet into your mouth and not down your throat, so is not solving the issue.

‘A bit of coaching and trying to understand why people have trouble swallowing from the pharmacist can help.

‘Tips such as tipping your head back and not raising your tongue after taking a swig of water, so not focusing on the tablet but instead getting the water down your throat, often work. Fruit juice can mask the taste — but avoid hot drinks as they will start dissolving the tablet.’ 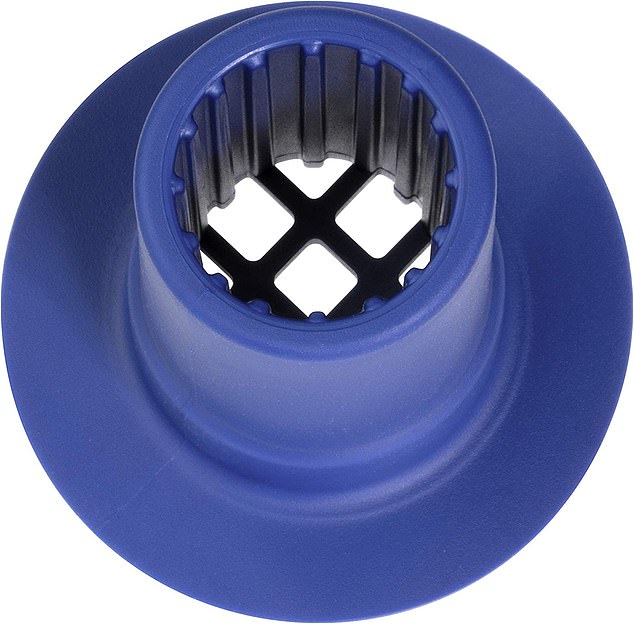 Claim: This palm-size plastic gadget fits on to medicine bottle lids and is ribbed on the inside and the outside for a better grip. It has a built-in magnifying glass to help with reading labels.

Expert verdict: Mohammed Hussain says: ‘Patients struggling to remove child-proof lids is an issue we deal with a lot.

‘It’s a legal requirement that all medicines are supplied in child-proof containers, but pharmacists can replace them with more simple to open ones if the patient asks.

‘This is a handy device — it’s cheap and does two important jobs: helping take off any size lid, while you can use the magnifying glass to ensure you’re taking the correct medicine (always carefully examine your tablets so you’re familiar with how they look).

‘Although pharmacists can often print off larger labels if you struggle to read standard ones, this is a really useful gadget.’

Claim: This small grabber-like accessory fits on to the end of a standard insulin injection pen. Its maker says it makes ‘injecting a safer, more comfortable, more consistent and worry-free process’. The tiny textured ‘fingers’ gather a fold of skin holding it securely and tickling the skin, causing a distraction to mask pain; it can also ‘substantially reduce bruising’ by preventing ‘the needle going in too deep’.

Expert verdict: Mohammed Hussain says: ‘In theory, the distraction approach of tickling the skin is a good idea, but in reality the injection is not painful.

‘Modern insulin pens are well designed so I don’t see a real need for this: the needles are tiny — as small as 4mm long, you barely see them. Also while modern injection pens use single-use disposable needles, with this you use it again and again, so you’d have to keep it clean between every injection, which may be several times a day.

‘The maker says this could stop bruising, but if the user frequently rotates the injection sites on their body then bruising is unlikely to be a major issue.’ 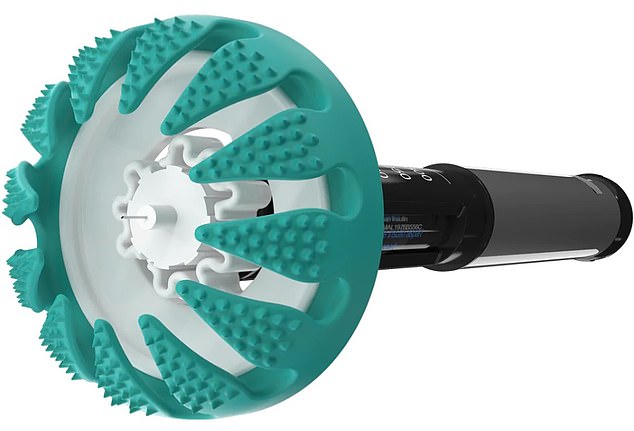 It is a thick viscous gel that masks the taste of pills after a teaspoon is squeezed over the pill before swallowing them together.

The maker suggests it also boosts saliva production to help with swallowing and states it should not interact with any medicines.

Expert verdict: Ben Merriman says: ‘Problems with swallowing are becoming increasingly common in adults, especially those with a condition affecting the nervous system such as a stroke, Parkinson’s or dementia.

‘There is evidence a product like this can help some people swallow medication more easily. Some drugs should be taken on an empty stomach to ensure they are absorbed correctly. The maker says the gel breaks down so absorption of medicines is unaffected.

‘Some medicines can cause a dry mouth as a side-effect, so this, which makes the mouth water, could be useful for those patients. But it should only be used with solid oral dosages, not with dispersible, soluble or effervescent tablets, liquids or powders.

‘If someone struggles to swallow pills, I would try to find out what is causing the problem. Speak to your pharmacist about taking medicine in a different formulation such as a liquid.’