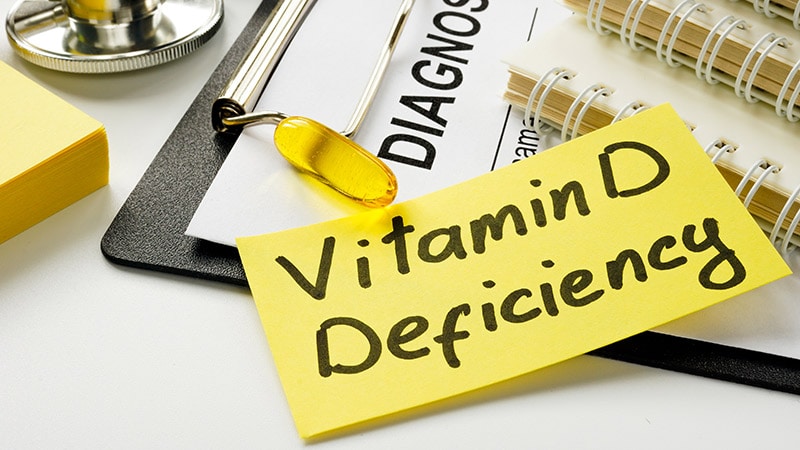 A new oral formulation of vitamin D3 — calcifediol (25-hydroxyvitamin D3, 25(OH)D3) — is better absorbed by people with obesity or intestinal malabsorption due to a variety of reasons, making it much more effective at treating vitamin D deficiency in these individuals than standard vitamin D3, new research shows.

“It’s not that people with obesity can’t absorb vitamin D, it’s that vitamin D is fat soluble, so when they ingest it, it goes into their body fat and it can’t get back out,” senior author Michael Holick, MD, PhD, professor of medicine, physiology, and biophysics, Boston University School of Medicine, Massachusetts, told Medscape Medical News.

Although patients with malabsorption issues simply can’t absorb enough vitamin D as well as other fat soluble nutrients, “the new 25(OH)D3 formation is more water soluble, so it’s directly absorbed from the intestine into the bloodstream, and as a result, whether you have obesity or fat malabsorption, it works equally well,” he added.

The small pilot study was published online May 19 in the American Journal of Clinical Nutrition.

The pharmacokinetics of oral 25(OH)D3 were compared with those of oral vitamin D3 in 10 healthy participants and another six malabsorptive patients, all of whom were given 900 µg of either 25(OH)D3 or vitamin D3, followed by a pharmacokinetic study.

Those with a history of intestinal malabsorption included four patients who had undergone gastric bypass surgery who are at especially high risk for vitamin D deficiency. Blood samples were measured for serum vitamin D3 and 25(OH)D3 at baseline and again at 2, 4, 6, 8, and 12 hours after ingestion on days 1, 2, 3, 7, and 14.

After a 14-day washout period — 28 days from the first dose — each participant switched and received either 900 µg of vitamin D3 or 900 µg of 25(OH)D3, depending on which one they took initially, and underwent another pharmacokinetic study. (It is important to appreciate that 900 µg is equivalent to 36,000 IU of vitamin D3, so this was a significant dose, Holick noted.)

Results from the pharmacokinetic studies showed that healthy participants had an approximately 2.8-fold higher area-under-the curve (AUC) and a 2.2-fold higher Cmax of serum vitamin D3 than patients with intestinal malabsorption of vitamin D (both P < .05).

“Thus, the malabsorptive patients had an approximately 64% lower AUC than the healthy participants,” Holick and colleagues emphasize.

Next, the 10 healthy participants were categorized into those with a mean body mass index (BMI) of 31.4 kg/m2 or 22.5 kg/m2, with five participants in each group. The pharmacokinetic study showed participants in the higher BMI group had a 53% lower AUC than those in the lower BMI group (P < .05), the investigators observe.

“Based on our results, it can be concluded that orally administered 25(OH)D3 may be an effective choice for treatment and prevention of vitamin D deficiency in patients with intestinal malabsorption and obesity,” they conclude.

Use of 25(OH)D3 Is a Novel Approach; Hope for Approval for OTC Use

Holick is hopeful that the US Food and Drug Administration will approve the new 25(OH)D3 formulation for over-the-counter (OTC) use in the near future. The product used in the pilot study was supplied by Carbogen Amcis.

“Using 25(OH)D3 could be a novel approach for treating vitamin D deficiency in patients with fat malabsorption syndromes,” and those with obesity, he added.

Commenting on the study, Vin Tangpricha, MD, PhD, professor of medicine, Emory University School of Medicine, Atlanta, Georgia, confirmed that vitamin D deficiency is common in patients with obesity and malabsorption, and noted that they need 2-3 times more conventional vitamin D than is recommended for adults of a healthy weight.

“These patients have difficulty with maintaining adequate vitamin D status,” he told Medscape Medical News in an email.

“And the use of 25(OH)D3 as a supplement — as opposed to vitamin D2 or vitamin D3 — is a very novel approach in these challenging patients,” he added.

Holick has previously reported that patients who are vitamin D sufficient were less likely to become infected with COVID-19, develop severe illness, or die from it, as reported by Medscape Medical News.

Holick and colleagues are now preparing a study for publication in which patients infected with COVID-19 received the new 25(OH)D3 formulation.

The study was funded by a grant from Carbogen Amcis, who manufacturers calcifediol. Holick has reported being a former consultant for Quest Diagnostics, and remains a consultant  for Ontometrics and Biogena. He has also reported receiving speaker fees from Abbott and has shares in Carbogen Amcis. Tangpricha is editor-in-chief of Endocrine Practice.