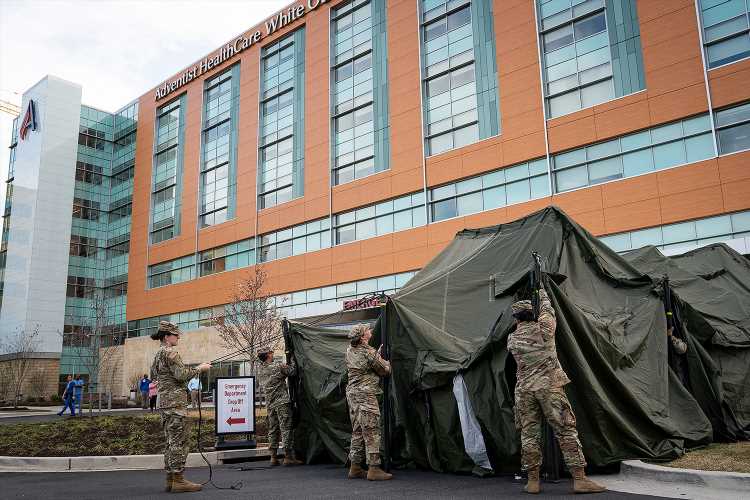 As the coronavirus continues to spread globally, many areas in the United States are seeing a significant increase in confirmed cases, including Virginia, Maryland, and Washington, D.C.

In an attempt to stop the spread of the virus, Maryland, Virginia, and Washington, D.C., issued stay-at-home orders on Monday, joining a number of other states that have already done so, including New York and New Jersey.

According to the Washington Post, Maryland reported 174 new infections of COVID-19 on Monday, totaling 1,661 in the state. Virginia reported 130 new cases, bringing its total to 1,251, while there were 94 new cases in Washington, D.C., making a total of 499.

Of the three areas, Virginia has the most reported deaths with 27, while Maryland has 17 and Washington, D.C., has 9 — a total of 53 deaths in the region as of Tuesday.

“We are no longer asking or suggesting Marylanders to stay home,” Gov. Larry Hogan said during a news conference in Annapolis. “We are directing them.”

Maryland’s stay-at-home order went into effect Monday at 8 p.m., with no end date given.

According to the Washington Post, violators of the order are subject to one year in jail or a fine of as much as $5,000, or both.

Hogan said no Maryland residents should be traveling outside of the state unless it is “absolutely necessary” and asked for anyone who has returned from out of state to self-quarantine for 14 days.

Under it, residents are not allowed to go out except for food, supplies, work or medical care, or to get fresh air or exercise, Northam said in a news confrence Monday.

Beaches in Virginia are also closed for any use besides exercise and fishing, while colleges and universities are banned from holding in-person classes.

Violations of Virginia’s ban can result in a fine up to $2,500 and/or jail time of up to a year.

D.C. Mayor Muriel E. Bowser’s order is effective through April 24 and “reinforces the Mayor’s direction to residents to stay at home except to perform essential activities,” her office reportedly said.

Residents of D.C. who violate Bowser’s ban can reportedly face criminal penalties, including up to 90 days in jail and fines up to $5,000.

Bowser is also mandating that apartments shut down common areas, including rooftops and party rooms. She is allowing residents to leave their homes to go to religious institutions or to care for others, as well as granting permission for gardening and outdoor exercise as long as residents avoid contact with one another.

New York currently has the most confirmed cases of coronavirus in the United States with at least 67,174 as of Tuesday morning, per the New York Times, while 1,224 people in the state have died.

As information about the coronavirus pandemic rapidly changes, PEOPLE is committed to providing the most recent data in our coverage. Some of the information in this story may have changed after publication. For the latest on COVID-19, readers are encouraged to use online resources from CDC, WHO, and local public health departments. To help provide doctors and nurses on the front lines with life-saving medical resources, donate to Direct Relief here.