Any migraine sufferer will tell you that the ailment is more than “just a headache.” Up to 39% of people worldwide suffer from migraines, which can last up to 72 hours and occur anywhere from once or twice a month to every day (via the Migraine Research Foundation). The intense pain can be accompanied by nausea and vomiting, sensitivity to light and sound, as well as numbness and tingling in the extremities. Such pain is almost always severe enough to interfere with normal life. Some doctors even think that infants who suffer from colic may actually be experiencing migraines.

Fortunately, treatments are available, ranging from common over-the-counter painkillers to more sophisticated medicines and even a special device implanted into the cheekbone to stimulate the nerve center thought to trigger migraines (via WebMD). Researchers are continuing to develop new remedies and study the possible causes. Most recently, scientists have discovered an unusual method of determining what’s at the heart (or head) of the debilitating headaches.

Getting sick on roller coasters may indicate you're migraine-prone 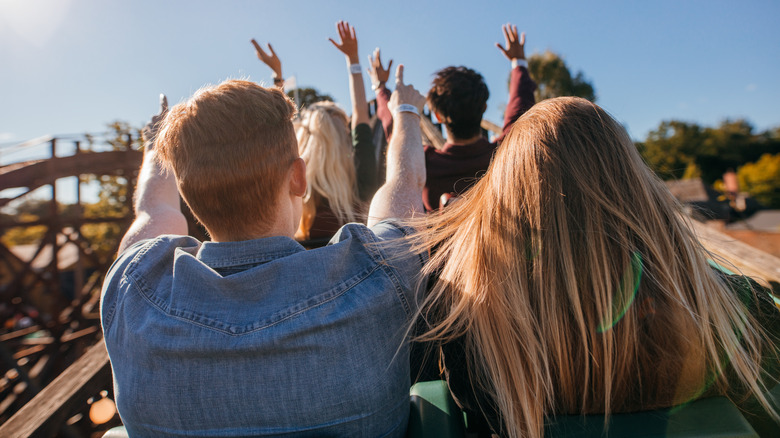 Because dizziness and nausea are common migraine symptoms, researchers at Germany’s University of Luebeck wanted to see what would happen if they exposed sufferers to an activity that is commonly associated with feeling dizzy and sick. They asked 40 volunteers — half of whom were migraine sufferers — to participate in a study in which they watched videos simulating roller coaster rides while lying in an MRI scanner. The scientists recorded the brain activity that occurred while the subjects were viewing the simulation (via New Scientist).

Sure enough, they found that 65% of migraine-prone volunteers reported feeling dizzy after watching the realistic videos, as opposed to 30% of the others. The imaging of the migraine sufferers’ brains also showed increased activity in the centers of the brain that control sensorimotor perception, gravity, balance, vision, and pain perception. So it would appear that the brains of people who often get migraines are wired differently from those of people who don’t.

These virtual roller coaster experiences could lead to important findings and new treatments for migraine sufferers. Lead researcher Gabriela Carvalho told New Scientist, “People who do and do not have migraines process information about motion and gravity differently, and these findings reflect that.” In the meantime, if you’re one of the millions of people who get migraines, you might want to reconsider going on the thrill rides next time you go to an amusement park.