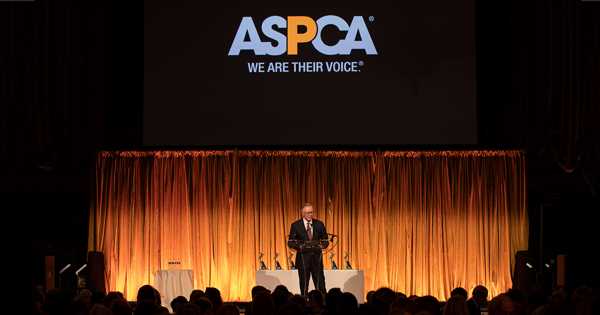 Every year at the ASPCA Humane Awards, the ASPCA honors incredible animal and human heroes who reflect the ASPCA’s dedication to animal welfare and our mission of providing effective means for the prevention of animal cruelty and suffering. For the first time since 2019, the Humane Awards will be held in person on October 12, 2022, at 12:00 PM ET and hosted by WNBC News Anchor Chuck Scarborough. This year’s event will once again recognize people and animals from across the nation by sharing their inspiring stories of commitment, hope, and compassion and will also be shared via livestream for the first time ever.

Read more about this year’s winners below:

In 2019, at the age of 7, Delanie Dennis founded Delanie’s Lemonade Stand in her parents’ restaurant, Cafe Delanie. Inspired by an animal welfare organization commercial that moved her and a book about a girl who ran a lemonade stand to benefit pediatric cancer patients, Delanie made a personal commitment to help animals in her community.

Each month, Delanie chooses a new local animal rescue organization to receive 100% of the sales of designated items at the stand and restaurant. In three years, Delanie, now 10, has helped raise and donate over $43,000 to these rescues.

In 2021, Delanie went further by hosting her first adoption fair, which featured 29 local animal rescues and resulted in the adoption of more than 30 animals. She also frequently volunteers at rescue organizations caring for a range of animals, including dogs, cats, horses and exotic animals. Delanie believes—and proves—that there’s no limit to what a kid can do to support animals in need.

ASPCA Dog of the Year: Clementine

Clementine, a three-year-old Catahoula/hound-mix dropped off in May 2021 at an animal shelter in southeastern Louisiana, was one of many animals relocated by the ASPCA Animal Relocation team to Texas when Hurricane Ida headed for the Louisianan coast that August. During her time at the Tri-City Animal Shelter in Cedar Hill, Texas, Clementine was adopted twice but returned each time due to her challenges adapting to her adopted families’ lifestyles and other pets.

Living full-time inside Fire Station #212—which now includes a custom-built outdoor play yard—Clementine serves not only as a beloved pet, but also as a valuable source of therapeutic support and comfort for firefighters coping with traumatic calls.

In March 2022, Dr. Jon Geller, an emergency veterinary clinician in Colorado for 20 years, was alarmed by the number of Ukrainians he saw fleeing the country with their pets due to the Russian invasion of their country. Inspired to volunteer his skills and resources, Dr. Geller traveled to Romania and spent weeks there setting up and operating a veterinary clinic at the Romanian-Ukraine border that provides veterinary care and pet passport services to the pets of Ukraine refugees. Dr. Geller’s team of volunteer student veterinarians from across Europe also supports local animal welfare organizations operating at or near the border.

Dr. Geller’s Ukrainian clinic is an extension of The Street Dog Coalition, an organization he founded in 2015 to provide free veterinary care to pets of people with housing challenges in nearly 50 U.S. cities. Named Veterinarian of the Year by the Colorado Veterinary Medical Association in 2019, Geller says he will immediately return to the war-torn area if he is needed.

Since 2015, Detroit Horse Power—founded by local elementary school teacher and horse enthusiast David Silver—has connected hundreds of under-resourced Detroit kids with horse barns outside the city for free summer camp and after-school experiences. These impactful experiences, including riding and caring for the horses, teach the kids valuable lessons about perseverance, empathy, responsible risk-taking, confidence and self-control that set them up for academic, career and life success. The organization also hosts a range of community events in Detroit.

Detroit Horse Power is also advancing toward its 2024 goal of constructing a new urban equestrian center on 14 acres of vacant land inside Detroit that will elevate and improve the accessibility of its programs for young people and help revitalize the surrounding neighborhood.

Discovering two of the dogs were unconscious and barely breathing, the firefighters immediately began chest compressions as and cooled off the dogs with a fire hose. The dramatic rescue was captured on video, inspiring people nationwide.

The rescued woman and all three dogs survived their ordeal thanks to these heroic firefighters’ skill and quick thinking. The collaborating departments—who serve more than 14,000 residents combined— acted not only on their duty but also on their deep compassion for people and animals in need.

The Feline and Offenders Rehabilitation with Affection, Reformation and Dedication (FORWARD) program was established in 2015 by former Pendleton Correctional Facility employee Michelle Rains in coordination with the Animal Protection League (APL) of Indiana.

In this innovative program, cats of various ages, colors and personalities—some with behavioral and medical challenges—travel from the APL to customized living spaces at the Pendleton Correctional Facility, a medium-maximum security prison. There, the cats are cared for by selected incarcerated individuals, who provide daily care as well as medical care and companionship to the cats. The caretakers also learn important responsibility and pet care skills. In these cat-caretaker relationships, each gains a new companion to appreciate, assist, learn from and enjoy.

Since the FORWARD program began, approximately 60 cats and kittens have spent time at the facility. Many were later adopted into safe and loving homes, thanks in part to the love and socialization experiences they received at the facility.