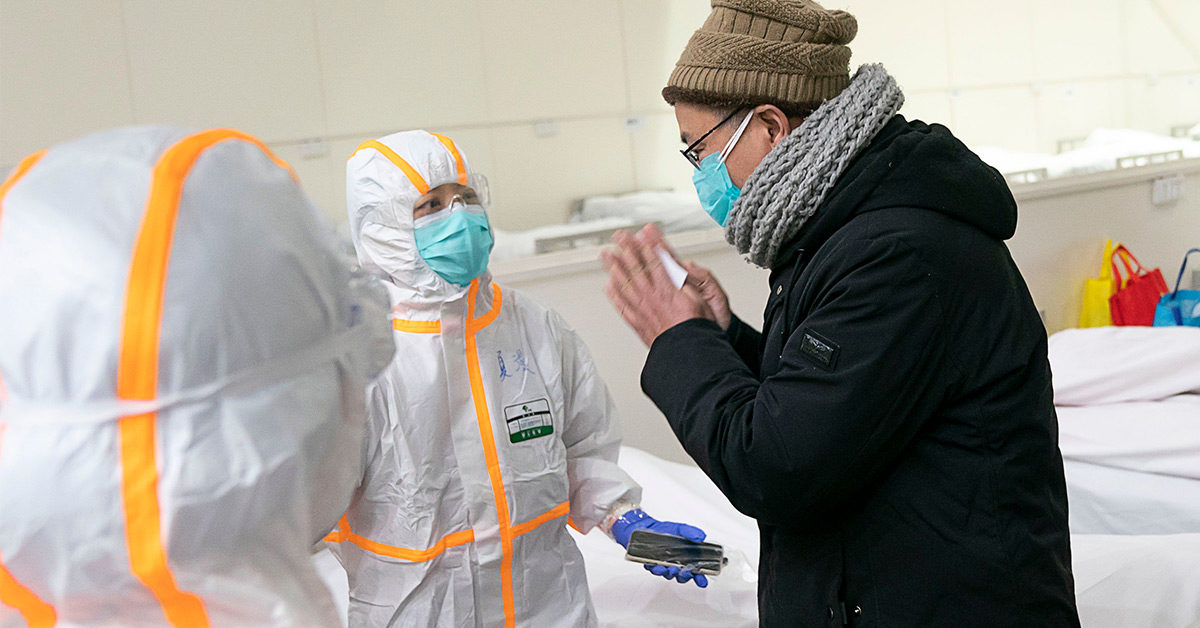 Since the new coronavirus, newly dubbed COVID-19, first appeared in Wuhan, China, late December, scientists have been working tirelessly to understand the novel respiratory illness and how to contain it.

Now, with over 43,000 people infected around the world (), we’re beginning to get a clearer idea of how the coronavirus spreads and what the infection’s trajectory looks like.

Two new studies published in the journal JAMA Friday found that the virus is transmitted easily from person to person, largely because many people are asymptomatic at first and may not realize they’re infected.

The evaluated 13 patients in Beijing, China, and found that most patients were relatively young and healthy, suggesting that the coronavirus can strike people of all ages.

The new research shows that the new coronavirus appears to be much more contagious than both SARS and MERS, but has a far lower mortality rate.

Some people are ‘super spreaders’

The Wuhan-based study predicts that, on average, an infected person will pass the virus to 2.2 people.

It also estimates that 41 percent of the patients spread the virus to others in the hospital.

But, certain people who become infected are so-called “super spreaders” and tend to spread the virus more rapidly than the average person.

“This person, who is kind of biologically radioactive, is in a position to actually transmit this virus to a considerable number of people vary readily,” said Dr. William Schaffner, the medical director of the National Foundation for Infectious Diseases and a professor in the division of infectious diseases at Vanderbilt University Medical Center.

“Super spreaders” aren’t well understood, but health experts suspect their ability to infect others is influenced by multiple factors.

The case study shows these spreaders may pass on the virus before they’re symptomatic or have been properly diagnosed. Therefore, they — along with those around them — aren’t taking the proper protective measures.

For example, one patient who wasn’t originally suspected of coronavirus was admitted to the surgical department due to abdominal symptoms. During this time, the patient infected at least 10 healthcare workers and 4 other patients in the surgical ward.

There are a couple of other reasons why some people may spread the virus more readily than others, according to Dr. Igor Koralnik, a professor of neurology and section chief of neuroinfectious diseases and global neurology at Northwestern University Feinberg School of Medicine.

First, is how virulent the virus is in a person.

“They maybe have some mutation or a change in the genome sequence of the virus that makes it more able to replicate,” Koralnik said, noting that a “super spreader” could have a more active virus.

It may also have to do with the immune system of the patient, and whether or not their body is able to contain the disease, Koralnik added.

But, we still don’t fully understand why someone may be a “super spreader,” and on top of that, we don’t find out until the damage is done.

“The problem is that we only know that somebody is a ‘super spreader’ by the time they’ve spread the virus. It’s not like you can study them from day zero when you don’t know they are infected yet and then see what happens,” Koralnik said.

Super spreaders are not common, but they’ve occurred with other , including , , and tuberculosis (TB).

During the 2002 SARS outbreak, there were a few known “super spreaders,” but the reason why these people spread SARS so readily was never further investigated. So it’s still somewhat of a mystery, according to Schaffner.

With MERS, 1 patient infected 82 others, including hospital staff, visitors, and nearby patients. Scientists believe that the patient, who was responsible for 44 percent of South Korea’s MERS cases, infected so many people because he wasn’t properly isolated or quarantined.

With TB, scientists have discovered that those who have the infection in their vocal cords can spread the TB germs very widely, Schaffner added.

The virus is unpredictable and varies from person to person

The study of 138 patients found that most people, about 75 percent, had mild symptoms, such as fever, cough, headache, and trouble breathing. Twenty-six percent were admitted to the intensive care unit due to complications, and 4.3 percent died.

On average, from their first symptom, people developed dyspnea, or trouble breathing, after 5 days, were admitted to the hospital after a week, and developed acute respiratory distress syndrome by 8 days.

In general, the severity of symptoms varied from person to person. This is typical of many viruses. Different people react to viruses in different ways.

Take the flu, for example.

“There are some people with strong immune systems that can beat off the virus and they have a relatively abbreviated infection. Others, the body’s immune system is simply not as capable at beating off the virus,” Schaffner said.

In general, people who are older or have an underlying illness — like diabetes, heart disease, or lung disease — are more vulnerable to viral infections.

But otherwise healthy people can contract a virus and develop a life threatening infection as well.

There’s not always a clear reason why some people develop severe illnesses and others don’t.

“But, the rule of thumb is that if you are already sick or your immune system is not working well or you have a lot of other comorbidity conditions, you may be more at risk for developing a disease with the novel coronavirus — but it’s not always the case,” Koralnik said.

It’s suspected that how sick someone gets may be influenced by how much of the virus they were originally exposed to.

“Perhaps that individual got a very large dose of the virus initially, and we know from many infectious diseases that if you get a very large initial dose, you’re more likely to have a more severe infection,” Schaffner said.

The coronavirus has only been circulating for 2 months now, and though we are starting to understand how it spreads and progresses, there are still a lot of unknowns. And those unknowns will be the key to containing the growing outbreak.

New research found that the new coronavirus is transmitted easily from person to person, largely because many people are asymptomatic at first and may not realize they’re infected. And some people — called “super spreaders” — may spread the virus to more people than the average person. Though we’re just starting to get a clearer idea of how the coronavirus spreads and progresses, there are still a lot of unknowns and questions we need answers to in order to contain the outbreak.