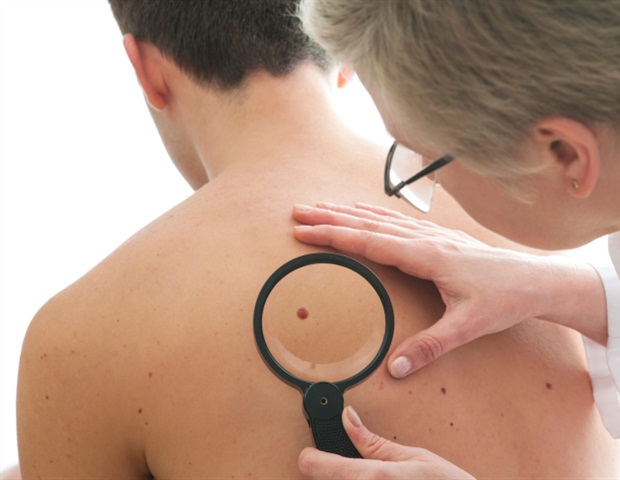 Melanocytic nevi, or moles, are nonmalignant growths that arise from pigment producing cells of the skin. They are mostly found in sun-exposed areas; however, they also can be found in sun-protected areas, such as the palms, soles of feet and nail beds, where they are known as acral nevi. While the mutation profile of nevi in sun-exposed areas is well understood, less is known about the genes that are commonly mutated in acral nevi. And while a subset of melanoma of sun-exposed skin arises in nevi, the link between nevi and melanoma in acral skin is poorly understood.

In a new study published in JAMA Dermatology, Moffitt Cancer Center researchers report on the mutation profile of acral nevi and describe differences between acral nevi and acral melanoma.

Melanoma is one of the most common types of cancer, with an estimated 100,000 new cases diagnosed in 2020 in the United States. Acral melanoma is a subtype on nonsun-exposed areas of the skin and is not linked to ultraviolet radiation exposure. Despite both conditions being derived from pigment-producing melanocytes, melanoma and acral melanoma differ in several ways. Patients with acral melanoma tend to have a poorer response to treatment and a higher mortality rate than patients with typical melanoma. Additionally, the two types of melanoma differ in their mutation profile.

To determine if there is a genetic link between acral nevi and acral melanoma, Moffitt researchers performed a genetic analysis on 50 acral nevi from 49 patients – 19 males and 30 females. They discovered that unlike acral melanoma, activating mutations in the BRAF gene were very common in the nevi, with 86% of patients having a mutation in the BRAF gene. Additionally, 10% of the patients had activating mutations in the NRAS gene, which were mutually exclusive from BRAF mutations.

These observations demonstrate that acral nevi and acral melanoma have different mutation patterns.

Acral nevi demonstrated a mutational spectrum very similar to that of nevi on sun-exposed skin, suggesting that acral nevi are unlikely to be the precursor lesion for the majority of acral melanomas. We hope our findings will lead to a better understanding of how acral melanoma develops."

"This is the largest series of acral nevi that have been sequenced to date, and the results were surprising to me," said Jane Messina, M.D., senior study author and senior member in the Department of Cutaneous Oncology. "Additionally, most of our patients were white/European in origin, while previous studies were mostly performed in Asian populations where there is a much higher frequency of acral nevi. The frequent presence of a mutation with a strong link to sun exposure suggests that even acral skin may be subject to the ravages of the sun."