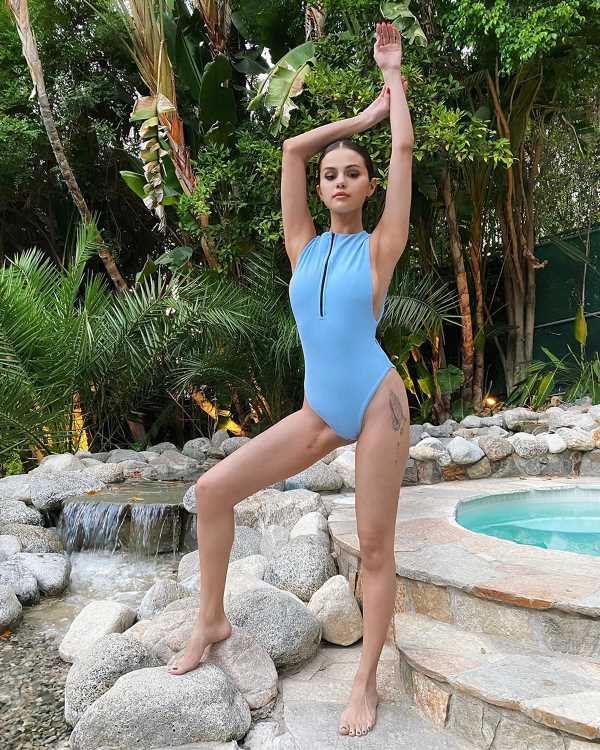 The “Rare” singer posed in a blue one-piece with a front-zip closure, showing off the scar she received from an emergency follow-up procedure after her kidney transplant in 2017.

In the Instagram photo’s caption, the singer shared, “When I got my kidney transplant, I remember it being very difficult at first showing my scar. I didn’t want it to be in photos, so I wore things that would cover it up. Now, more than ever, I feel confident in who I am and what I went through…and I’m proud of that.”

Today is International Scoliosis Awareness Day. I just wanted to share my scar and encourage anyone out there who's gone through something similar to share theirs with me. Let's be proud of our scars! I'd love to repost any of your images on my stories so please tag me and I will share. #internationalscoliosisawarenessday

Princess Eugenie — who recently announced that she is expecting her first child with husband Jack Brooksbank — proudly showed off her scoliosis scar to encourage others to remember that scars are beautiful.

On her wedding day in October 2018, the royal publicly showed her scar by wearing a low-back wedding dress by British-based label Peter Pilotto.

Of her dress choice, Eugenie told PEOPLE in 2019, “I had always wanted a low back – part of it was showing my scar and I believe scars tell a story about your past and your future, and it’s a way of getting rid of a taboo. For me, it’s a way of communicating with people who are going through either similar situations with scoliosis or having a scar of their own that they are trying to deal with.”

I love my scar

“I love my scar,” Jenner wrote on Instagram, showing off a large scar on her left leg. Jenner got the scar while playing hide-and-seek with her sister, Kendall Jenner, when she was about five years old.

Today isn’t just Valentine’s Day, it’s also National Organ Donor Day. I wear these scars proudly, it’s a reminder of how strong our bodies can be – you can function with one kidney but God gave us two! These scars are also a reminder of just how powerful acts of love can be. Organ donation saves lives and I’m proud to be a living donor and testament. I’ve been very private about the organ donation process in the past, but I want to share my experience more with you all in hopes of being a light and resource. Text me your questions or share your experiences, I’m here as a support and friend: +1 (818) 217-8160 #nationalorgandonorday #shareyourstory

The actress — who donated her kidney to her best friend, Selena Gomez — told SELF, “My scars do not define me. My scars tell my story. And so I really appreciate these scars because they honestly changed my life—not just, you know, because of Selena, just me, personally, life came into perspective. I learned a lot.”

The star has an incision across her lower abdomen and two more on her stomach. She added, “Your scars don’t define you. It’s a part of your story, and it’s a part of the story that makes you special and you different. Girl, show it.” Eugenie isn’t the only member of the royal family with a scar. Prince William has one on the left side of his head and he appropriately calls it, his “Harry Potter scar.”

How did the royal manage to come by the mark? He revealed in a 2009 interview, “I got hit by a golf club when I was playing golf with a friend of mine. We were on a putting green and the next thing you know there was a seven iron and it came out of nowhere and hit me in the head.”

Not exactly defeating Lord Voldemort when you were just a baby, but still a cool story. The 30 Rock star was left with a scar on her face after a stranger walked into her front yard and cut her with a knife at just five years old.

Fey doesn’t talk about the incident much, and told Vanity Fair, “It’s impossible to talk about it without somehow seemingly exploiting it and glorifying it.”

She said it didn’t affect her confidence growing up: “I proceeded unaware of it. I was a very confident little kid. It’s really almost like I’m kind of able to forget about it, until I was on-camera, and it became a thing of ‘Oh, I guess we should use this side’ or whatever. Everybody’s got a better side.” Ain’t that the truth! The singer has discoid lupus erythematosus, a type of lupus that leaves large scars on the skin.

Seal told Yahoo Lifestyle of the scars on his face, “Something that had kind of been initially traumatizing turned out to be something that has made me instantly recognizable.”

He added that, although he was initially self-conscious about them, “I quickly realized this body is not who we are. I got off lightly.”

Anyone who knows me (or knows *of* me) equates me with 2 things: nudity and pelvic pain. I’ll take it if it lets me spread the good word. And now, I’m dating & connecting my scars from 12 surgeries as part of my endo sister @georgiewileman’s campaign #thisisendometriosis (March is endometriosis awareness month) to raise awareness of endometriosis and the multiple surgeries that are performed every year to try and ease the symptoms of an incurable disease that effects roughly 1 out of 10 women, yet is so often ignored or dismissed as a mental health issue (uh yeah, when you ignore our pain it sure becomes one!) Let’s make some noise this coming bikini season. PS: Should I just go for it and make these lines permanent? PPS: Trying to write the dates upside down on my stomach is the only downside of living alone.

Dunham is no stranger to bearing it all, but in March 2019, she showed off her scars from the 12 surgeries she got to ease the symptoms and pain from endometriosis.

“Should I just go for it and make these lines permanent,” Dunham asked on Instagram, after connecting and dating her scars as part of the This Is Endometriosis campaign. Queen Latifah got the scar on her forehead when she was just three years old, after tripping over a phone cord and hitting her head on the bathroom door. The star told The Chicago Tribune that she doesn’t like when it’s edited out of photos.

“It’s part of who I am, so I’d like it to be accepted as part of who I am,” she said. “There are a lot of people reading those magazines not unlike myself, who have some sort of scar, too. I don’t think we should try to make everything look perfect.”

Puth got his signature eyebrow scar when he was just a toddler. “A lot of people think this part of my eyebrow is shaved. It was actually a black lab that bit my face. I almost died,” he said in an interview with Johnjay and Rich.

“Luckily everything worked out and now I have this little thing on my eyebrow,” the singer said. Lakshmi has a scar on her right arm from a car accident that she got into as a teenager. She told SELF in 2016, “I’m proud of my scars because they mean that I’ve had a life, and an interesting one.”

Though she admitted that when she was a teenager she “wanted to cover it up,” she now says that she would never get rid of it. She told SELF, “I like my scar, I’m happy to have a visual reminder every day how precious life is.” Hill told Rolling Stone that his scar “reminds [him] to work hard.” He got the scar in a car accident at just 15 years old, telling the magazine that he was acting out because his mother was diagnosed with cancer.

After waking up in a hospital and hearing doctors talking about whether or not to amputate his arm, Hill said he turned a new leaf. “I said to myself, ‘I’ll never let them down ever again.’ I said, ‘I’m going to be f—— successful. I’m going to resurrect what I put these people through by being a little asshole.” While she hasn’t disclosed how she got the scar under her left eye, Mary J. Blige is proud to show it off. She told CBS News, “If I don’t accept the scar on my face, the lips that God gave me, the big giant feet, the long legs, whatever it is that I’m deformed with, I got to love it so everybody else can love it.” The Modern Family star has nothing to hide. At the 2016 SAG Awards, Winter wore a dress that did not hide her breast reduction surgery scar.

“Guys there is a reason I didn’t make an effort to cover up my scars!” she wrote on Twitter. “They are part of me and I’m not ashamed of them at all.”

#feelinmyselffriday Thought I came up with a cool new hashtag… turns out I’m wrong. ALSO. Turns out I’m not the first person to take a selfie in the bathroom… weird. #showyourscars #gryffindor

Showing off your scars must run in the family!

Winter’s Modern Family co-star Sarah Hyland was diagnosed with kidney dysplasia when she was a child, and the 16 surgeries she has had (including two kidney transplants) have left her with scars on her stomach. She has no problem showing them off on the ‘Gram and encourages her fans to “#ShowYourScars.”

“Scars are scars. They are little tally marks of what you’ve been through as a human being,” Hyland told Self.