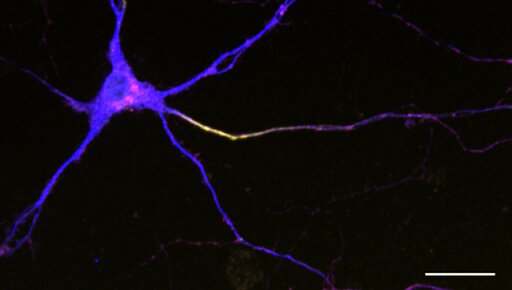 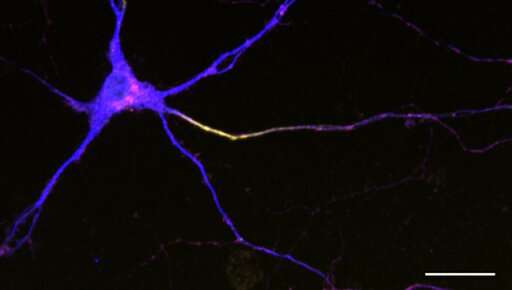 Everything your brain does—every memory, decision, emotion and command to move—starts with an electrical signal generated by a neuron. One of the most sophisticated cells in the body, every neuron has two sides. At one end is the tail-like axon, which acts as a data transmission line, sending signals to other neurons. At the other is the neuron’s branching crown of antenna-like dendrites, which receive incoming signals from other cells. The importance of this bipartite biology cannot be overstated; it is the basis for the brain’s incredible abilities.

Maintaining this asymmetry, scientists have long known, depends on axons and dendrites having different receptors on their surfaces, proteins that do everything from shaping the cell to responding to neurotransmitters. But how neurons establish this sharp divide, preventing receptors on one side from straying to the other, has been a puzzle.

Now, a collaboration of labs across the Wu Tsai Neurosciences Institute and both sides of the Atlantic Ocean has found a solution: a mechanism that captures and destroys errant receptors in danger of crossing the axon-dendrite boundary. The team reported their work August 17 in Nature.

“We have identified how the axon and dendrite are maintained as separate compartments,” said Kang Shen, Ph.D., the Vincent V.C. Woo Director of the Wu Tsai Neurosciences Institute, a professor of biology and pathology and an HHMI investigator. “This is important not only for understanding healthy brain function, but also potentially for shedding light on disease mechanisms, because of the central importance of compartmentalization to the normal neuronal functions.”

To make this new discovery, the team leveraged their collective, interdisciplinary expertise in different experimental techniques across four species: worms, mice, rats, and humans. “It’s extremely difficult for one lab to study, on its own, every one of these animals,” said postdoctoral scholar Kelsie Eichel, Ph.D., first author on the new paper. “To do this broad-reaching research required a huge amount of collaboration.”

It all started in the Shen lab with the most famous worm in laboratory science, C. elegans. One of the smallest model organisms in neuroscience, this millimeter-long transparent nematode has a mere 302 neurons, making it much more tractable for study than a human with tens of billions of neurons. Powerful in its simplicity, the worm is responsible for Nobel prize-winning discoveries related to programmed cell death, for example, and RNA interference technology. In part that’s because its genes, which share certain similarities with ours, have been extensively studied using a suite of tools developed over the years. Today, scientists can tweak a gene in a young worm using CRISPR technology and watch the effects of this tinkering play out in a live adult and its neurons.

Eichel focused on one of these neurons, a sensory cell that helps the animal detect physical contact and, in the lab, respond when poked with a wire. This neuron is also known to be especially asymmetrical, with lots of dendritic branches and a single, unbranched axon. She found a well-defined boundary between its two sides, an area called the axon initial segment. Famous as the location where nerve signals originate, the axon initial segment had been seen in vertebrate neurons but not well defined in worms.

Getting rid of some of the molecules in this middle area (by changing the activity of the genes that create them) had a profound effect. A receptor known to hang out exclusively in dendrites popped up in the axon. This caused rogue branches to sprout in the axon. The worm changed its behavior, losing its natural inclination to pull away when poked.

To investigate the axon initial segment’s role in keeping dendrite receptors in the dendrite, Eichel took a closer look at this area. She noticed packets floating below the surface loaded with dendrite receptors from the surface. This seemed to be the handiwork of endocytosis, the pinching inwards of a cell’s surface to form a container that can carry molecules inward.

Could endocytosis be sucking in stray receptors, preventing them from crossing over into the axon? To strengthen her case, Eichel turned to another species. She reached out to Robert Malenka and Thomas Südhof, two Wu Tsai Neuro professors with expertise in rodent neurons grown in a dish. A researcher from the University of Bordeaux, David Perrais, contributed his lab’s skill in precisely measuring endocytosis in such cells from rats. The results went far beyond what Eichel had expected.

Previous studies had not noticed endocytosis in the axon initial segment in any animal. But this past work had looked only at proteins that always reside in this region, not at receptors invading from the dendrite.

When the researchers then interfered with endocytosis in myriad ways, the result was typically the same. Dendrite receptors showed up in the axon, and problems ensued. This happened not only in neurons from worms and rodents, but also in those from humans provided by Marius Wernig’s lab, the first in the world to grow functional neuronal cells by reprogramming cells from human skin.

“Seeing the same signs show up in worms, rodents and humans gave us a lot of confidence in our theory,” said Eichel, who also gathered evidence for the endocytosis of other dendritic receptors and a receptor from the axon.

Tracking the fate of receptors carried in packets, she found that they ended up being degraded. This might seem like an inefficient strategy—capturing and destroying wayward receptors rather than shuttling them back to their respective sides—but Eichel sees an elegant simplicity at work. Instead of having to sort out receptors from the axon and dendrites, the cell throws them all out.

Before this new study, most research on axon and dendrite compartmentalization had focused on how the axon initial segment slows down the diffusion of receptors. The new work, said Shen, adds to these a much more active barrier.