It’s hard to escape the numbers.

More than 5.5 million people in the United States have tested positive for COVID-19.

The numbers are so mind-numbing that it may be hard to think of the people behind them.

But the losses are real and the ripple effect extends beyond immediate families to whole communities.

A new report suggests the pandemic could leave hundreds of thousands grieving. In many cases, that grief may be exacerbated by the isolation and separation from loved ones.

“These are the secondary victims,” said Holly Prigerson, PhD, a bereavement researcher, co-director of the Center for Research on End-of-Life Care at Weill Cornell Medicine in New York City and one of the report’s authors.

She says there are fears those secondary victims could be headed for intense and enduring psychological distress.

“There’s a real mental health crisis brewing if it’s not already happening, and it’s unlikely to go away overnight,” she told Healthline. 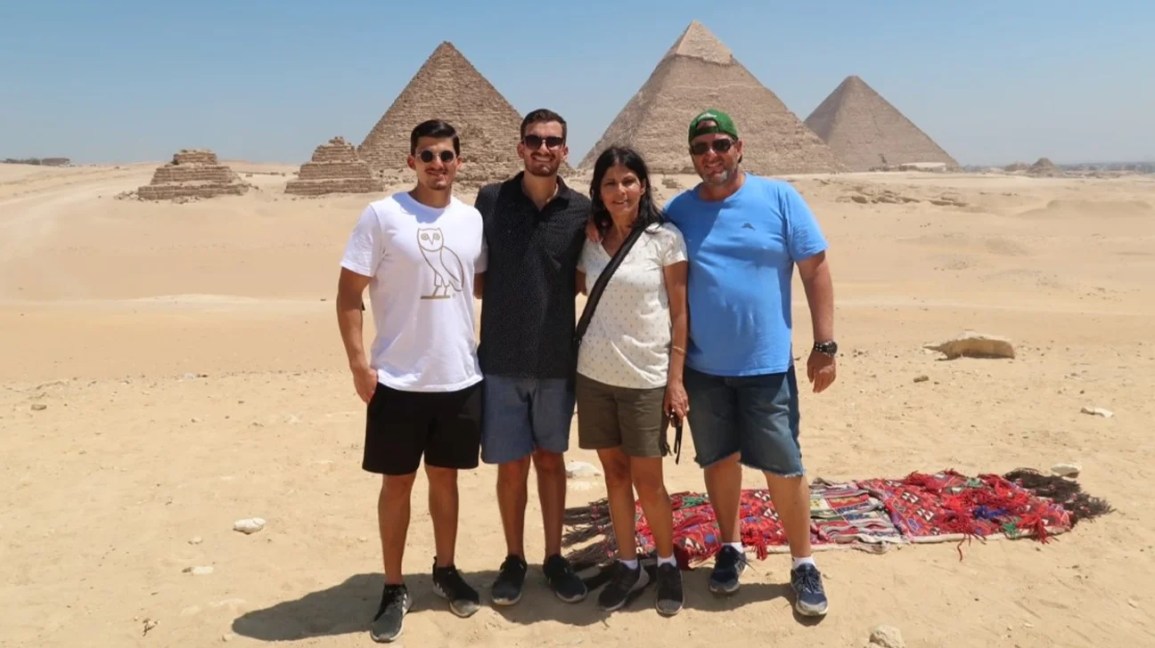 Dr. Carlos Vallejo, right, with his family at the Egyptian pyramids. Photo courtesy of the Vallejo family.

We set out to talk to families about how they’re handling grief and how their loss may be changing their lives.

“It kills me because my dad was one of the healthiest people I knew,” said Kevin Vallejo. “At 57, he was still skiing.”

Vallejo, a 23-year-old medical student from Miami, Florida, has been dealt a double blow. He lost both his father and grandfather to COVID-19 in just over a month.

Both men were doctors. His grandfather, Jorge, was 89 and a retired OB-GYN. His father, Carlos Vallejo, was an internist.

Both were his role models.

“My dad played basketball and racquetball with me. He’d work out. He was a very healthy guy. That’s why it’s just shocking that this destroyed him,” Vallejo told Healthline.

Kevin Vallejo says when the pandemic began, his father was conducting telemedicine appointments, but he still wanted to see his long-time patients at nursing homes.

“He was seeing them in full PPE (personal protective equipment), but he still somehow caught the virus,” Vallejo said.

The hardest part, Vallejo says, is that the family couldn’t be with his father for his final days. He passed away on August 1.

“That’s one thing that bothers me. My dad may have still been alive if I could have been there in the room with him,” Vallejo said.

“For my family, it’s a roller coaster of emotions. One second we’re just trying to get by, the next somebody’s crying in the house. And we beat ourselves up over what we might have been able to do,” he added.

That last part is particularly frustrating, Vallejo says, because he comes from a medical family with more than 20 doctors.

His mother is a practicing psychiatrist, but for now they insist she stay safe.

“I won’t let her go to a nursing home anymore. For now, she can just do telecare,” Vallejo said. “We can’t take any more loss in our family.”

The families of healthcare workers are being hit hard by the pandemic.

Kaiser Health News and the Guardian U.S. compiled a database called “Lost on the frontline.” It contains the names of more than 900 healthcare workers who likely died from COVID-19.

Cassondra Grant Diaz is one of them.

The 31-year-old was a bookkeeper at a nursing home in Hartford, Connecticut.

Her husband, Sean, says they believe she contracted the virus at work, even though she was always careful.

“When she got home, she would change her shirt in the car, leave her jacket in the car or bring it up and spray it in the hallway. When she got in the house she would put her clothes in a special little basket, then seal them in a bag and head straight to the shower,” he explained.

But in late April, Diaz decided her job was too dangerous.

“She stopped working because she was scared of getting sick,” her husband said. “They had started having more people coming down COVID-positive. But it was already too late.”

Diaz first developed some flu-like symptoms. A week later, ‪on April 29, she complained of pain in her leg.

An ambulance took her to the hospital. She died that same day.

“I don’t even know how to explain how I feel,” her husband said. “This was my soulmate, the love of my life and she died nine days after our anniversary. I can’t sleep. I grieve and I cry every day.”

He says he has found some comfort in a support group for people who have also lost their spouses. But only a little.

“I’ve never felt a pain like this before. I’m dealing with survivor guilt and I don’t wish this on anyone,” he said.

A tale of two siblings

The Anaheim, California, nursing student is happy to have survived COVID-19. But she’s devastated that she lost her brother, Joshua, to the virus.

“It’s so hard. It’s hard to think that I got sick and I survived it. But my brother, basically my twin, my best friend didn’t. I never thought we’d be separated,” Obra told Healthline.

Joshua, 29, was a registered nurse at a nursing facility that cares for older adults with dementia.

Obra says she was her brother’s apprentice, working alongside him to fulfill her clinical practice requirement for nursing school.

To her, it was ideal. The siblings lived together and she got to work with her older brother to whom she looked up. The facility had safety protocols in place.

“Our facility had been on lockdown. We checked temperatures, oxygen saturation, and looked for signs and symptoms of COVID. We wore masks. At the time, we didn’t think there was an issue,” she explained.

Then, one day in June, Joshua came down with COVID-19 symptoms. They both got tested. They were both positive.

On June 19, Joshua was in the hospital. Four days later, he was on a ventilator.

“I was in isolation at home. I remember praying and crying. I kept wondering if I would wind up on a ventilator next to him. My parents were super afraid they would lose both kids,” Obra said.

“I never thought I’d go through something like this. Our lives had been almost picture perfect. Now my life is upside down,” Obra said. “Losing someone like this takes such a dark toll on you mentally and physically.”

Obra says she’d like to go back to work in healthcare when it’s safe. But for now, she is trying to comfort her parents and she’s finding some solace in urging people to be careful.

“It’s not a joke, which is why I take every opportunity to speak out about it. I hope I can help prevent other people from having this happen to them,” she said.

Kristin Urquiza lost her father, Mark, to COVID-19 on June 30.

She says her dad was relatively healthy but came down with symptoms in mid-June and was hospitalized.

In an interview with Healthline, she said the hardest part was that her father died alone in an ICU with a nurse holding his hand.

“It’s agonizing. You know when my dad went into the ICU he was planning to come out. I also know that he was terrified,” she said. “Just thinking about my dad those last few days, hearing strange noises in the ICU, the voices of strangers, not being able to hear the voices of the people who were wanting him to live, that just breaks my heart.”

Urquiza blames her father’s illness on failed policies. She says he listened to the Arizona Governor Doug Ducey and President Donald Trump who said it was safe for the state to reopen and for people to go out.

Now, Urquiza is turning to activism to help her heal.

She was a prime-time speaker at the Democratic National Convention last week and has started an advocacy group called Marked by COVID to advocate for changes.

“Being able to connect with others who feel like me… has helped me feel less alone,” she says.