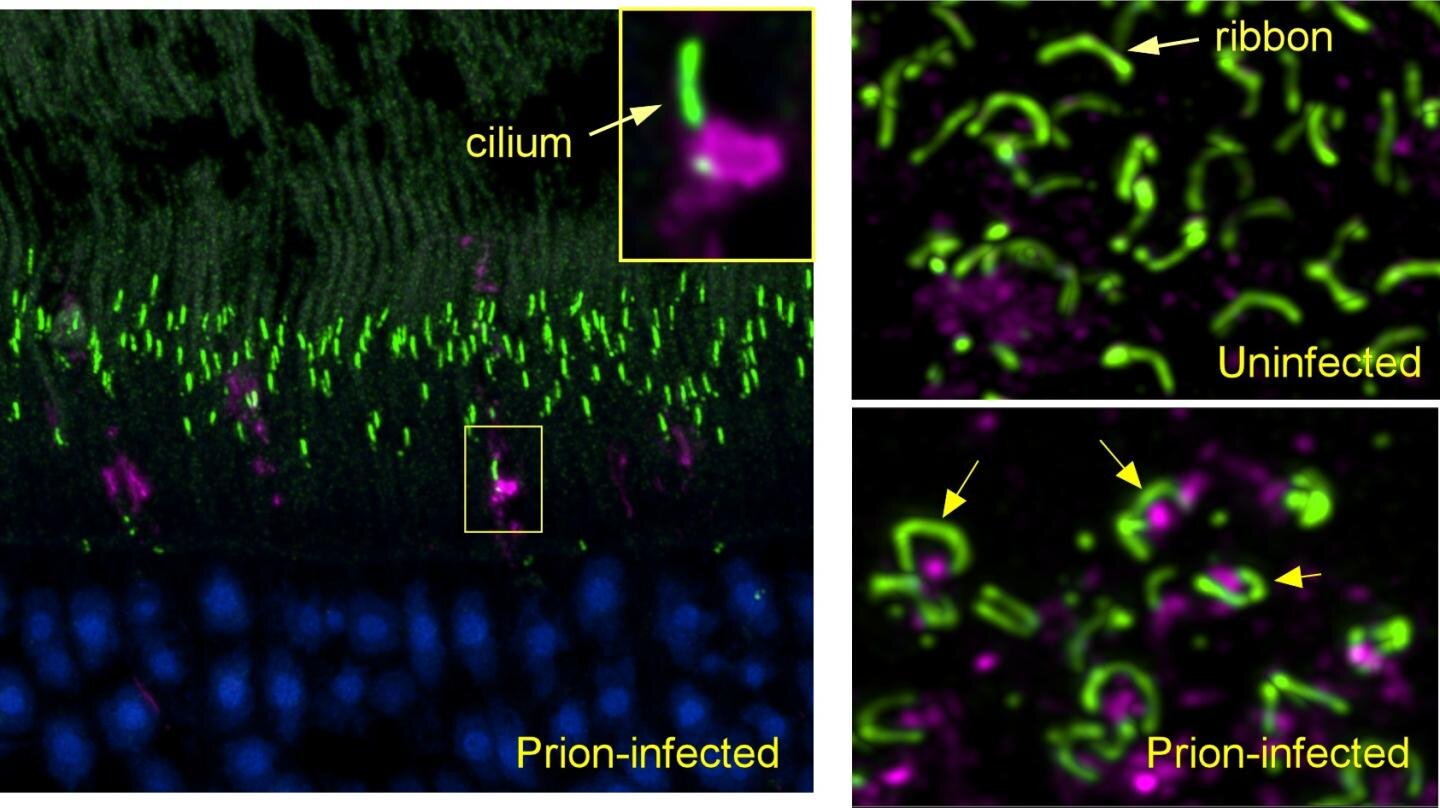 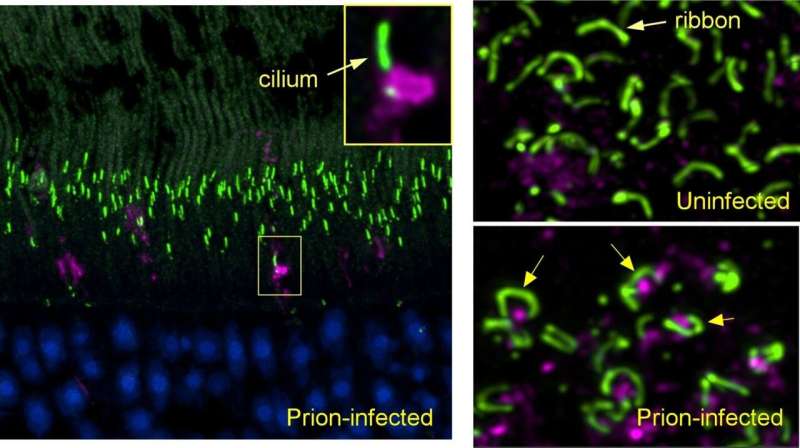 The earliest eye damage from prion disease takes place in the cone photoreceptor cells, specifically in the cilia and the ribbon synapses, according to a new study of prion protein accumulation in the eye by National Institutes of Health scientists. Prion diseases originate when normally harmless prion protein molecules become abnormal and gather in clusters and filaments in the human body and brain.

Understanding how prion diseases develop, particularly in the eye because of its diagnostic accessibility to clinicians, can help scientists identify ways to slow the spread of prion diseases. The scientists say their findings, published in the journal Acta Neuropathologica Communications, may help inform research on human retinitis pigmentosa, an inherited disease with similar photoreceptor degeneration leading to blindness.

Prion diseases are slow, degenerative and usually fatal diseases of the central nervous system that occur in people and some other mammals. Prion diseases primarily involve the brain, but also can affect the eyes and other organs. Within the eye, the main cells infected by prions are the light-detecting photoreceptors known as cones and rods, both located in the retina.

In their study, the scientists, from NIH’s National Institute of Allergy and Infectious Diseases at Rocky Mountain Laboratories in Hamilton, Montana, used laboratory mice infected with scrapie, a prion disease common to sheep and goats. Scrapie is closely related to human prion diseases, such as variant, familial and sporadic Creutzfeldt-Jakob disease (CJD). The most common form, sporadic CJD, affects an estimated one in one million people annually worldwide. Other prion diseases include chronic wasting disease in deer, elk and moose, and bovine spongiform encephalopathy in cattle.

Using confocal microscopy that can identify prion protein and various retinal proteins at the same time, the scientists found the earliest deposits of aggregated prion protein in cone photoreceptors next to the cilia, tube-like structures required for transporting molecules between cellular compartments. Their work suggests that by interfering with transport through cilia, these aggregates may provide an important early mechanism by which prion infection selectively destroys photoreceptors. At a later study timepoint, they observed similar findings in rods.

Prion protein also was deposited in cones and rods adjacent to ribbon synapses just before the destruction of these structures and death of photoreceptors. Ribbon synapses are specialized neuron connections found in ocular and auditory neural pathways, and their health is critical to the function of retinal photoreceptors in the eye, as well as hair cells in the ear.

The researchers say such detailed identification of disease-associated prion protein, and the correlation with retinal damage, has not been seen previously and is likely to occur in all prion-susceptible species, including people.