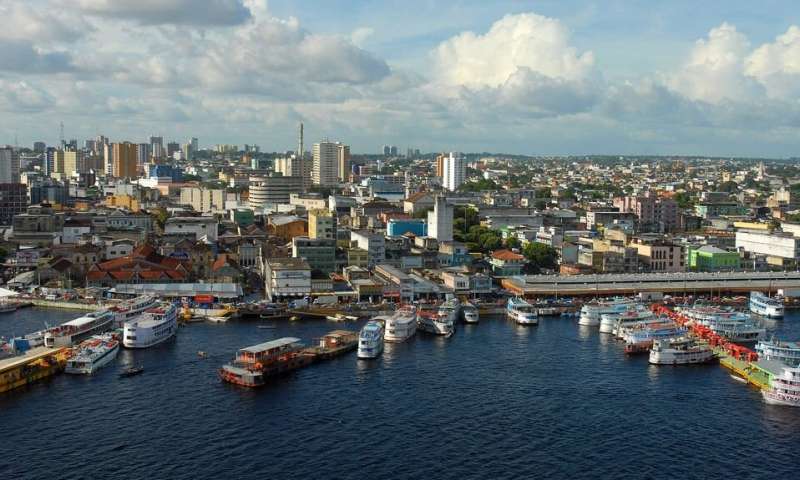 By testing approximately 1,000 blood donation samples each month in in the Brazilian cities of São Paulo and Manaus, an international team of researchers have shown that, while both cities have experienced large epidemics with high mortality, as much as three-quarters of the population in Manaus was infected between March and October, and a third of the population in São Paulo.

Researchers from the University of São Paulo (USP, São Paulo, Brazil), the Fundação Hospitalar de Hematologia e Hemoterapia do Amazonas (Hemoam, Manaus, Brazil), Fundação Pró-Sangue/Hemocentro de São Paulo, Imperial College London, and the University of Oxford United Kingdom, worked together to collect and analyze data on the prevalence of SARS-CoV-2 antibodies, a marker of prior infection, among blood donors in the Brazilian cities of Manaus and São Paulo.

Their research is published in the journal Science.

The authors state that these results are a data-based warning of what may be the extent of SARS-CoV-2 transmission in the absence of effective mitigation.

Brazil has experienced an unprecedented epidemic caused by SARS-CoV-2, with >6.5 million cases reported to date and >175 thousand deaths. The Amazon region, in the north of the country, has been hardest hit. In Manaus, mortality increased rapidly in April, with overwhelmed health services requiring communal graves to bury the dead.

Professor Nuno Faria, Associate Professor at the University of Oxford and Reader at Imperial College, principal investigator of CADDE project, said: “The large burden of illness and death caused by COVID-19 in Manaus emphasizes the importance of face coverings, social distancing and hand washing to stop the spread of infection throughout Brazil—measures that will be reinforced by vaccination to immunize individuals at risk and, ultimately, to protect whole populations.”

Dr. Lewis Buss, medical doctor and researcher at the University of São Paulo, said: “The blood banks in Manaus and São Paulo are part of the Recipient Epidemiology and Donors Study (REDS), which provided the infrastructure to rapidly establish a testing program. Because we used residual blood donation samples it was possible to generate a long time series, covering the entire period of SARS-CoV-2 transmission in Brazil.”

Professor Ester Sabino, immunologist at the University of São Paulo, said: “Infection rates are currently high in Latin America and we find particularly high infection rates in Manaus, the largest urban metropolis in the Amazon region. Manaus is a warning for other cities, for example Sao Paulo could more than double the number of deaths if it reached a similar level of infection.”

Dr. Maria do Socorro Carvalho, director of Hemoam, said: “We believe Manaus can serve as a sentinel to understand population immunity and reinfection.”