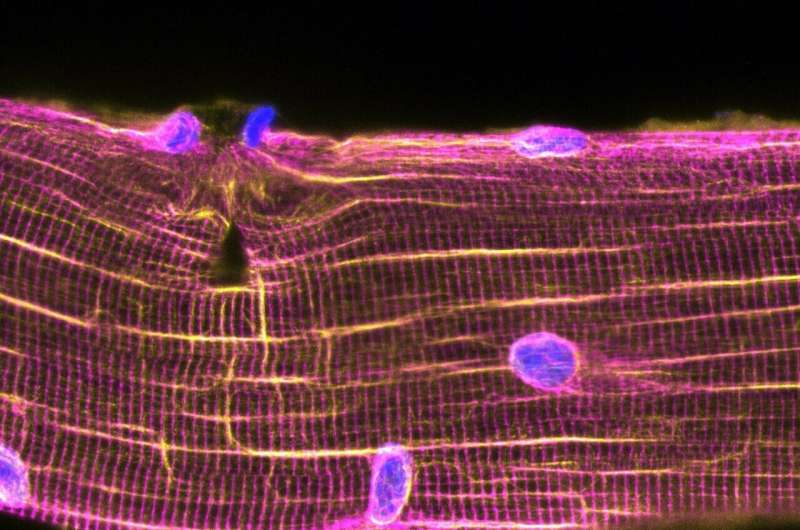 Muscle is known to regenerate through a complex process that involves several steps and depends on stem cells. Now, a new study led by researchers at the Instituto de Medicina Molecular João Lobo Antunes (iMM; Portugal) and the University Pompeu Fabra (UPF Barcelona; Spain) and published today in the scientific journal Science, describes a new mechanism for muscle regeneration after physiological damage relying on the rearrangement of nuclei. This protective mechanism opens the road to a broader understanding of muscle repair in physiology and disease.

Skeletal muscle tissue, which is important for locomotion, is formed by cells that have more than one nucleus, an almost unique feature in the human body. Despite the plasticity of muscle cells, their contraction can be accompanied by muscle damage. William Roman, main author of the study and researcher at iMM and UPF Barcelona, explains: “Even in physiological conditions, regeneration is vital for muscle to endure the mechanical stress of contraction, which often leads to cellular damage.” Although muscle regeneration has been investigated in recent decades, most studies were centered on mechanisms involving other cells, including muscle stem cells, which are required upon extensive muscle damage.

“In this study, we found an alternative mechanism of regeneration that is muscle cell autonomous,” says Pura Muñoz-Cánoves, group leader at the University Pompeu Fabra, and study leader. Researchers used different in vitro models of injury and models of exercise in mice and humans to observe that upon injury, nuclei are attracted to the damage site, accelerating the repair of the contractile units.

Next, the team dissected the molecular mechanism of this observation: “Our experiments with muscle cells in the laboratory showed that the movement of nuclei to injury sites resulted in local delivery of mRNA molecules. These mRNA molecules are translated into proteins at the site of injury to act as building blocks for muscle repair,” explains William Roman. On the importance of these discoveries, Pura Muñoz-Cánoves says: “This finding constitutes an important advance in the understanding of muscle biology, in physiology and muscle dysfunction.”