My husband and I were psychological opposites. I've always seen the glass as half full; to him it was half empty. That difference, research findings suggest, is likely why I pursue good health habits with a vengeance while he was far less inclined to follow the health-promoting lifestyle I advocated.

I'm no cockeyed optimist, but I've long believed that how I eat and exercise, as well as how I view the world, can benefit my mental and physical wellbeing. 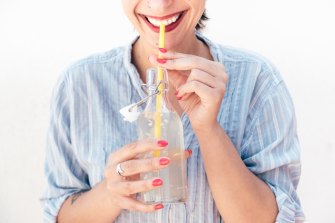 An increasing number of recent long-term studies have linked greater optimism to a lower risk of developing cardiovascular disease and other chronic ailments.Credit:Stocksy

An increasing number of recent long-term studies have linked greater optimism to a lower risk of developing cardiovascular disease and other chronic ailments and to fostering "exceptional longevity", a category one team of researchers used for people who live to 85 and beyond.

Admittedly, the relationship between optimism and better health and a longer life is still only a correlation that doesn't prove cause and effect. But there is also now biological evidence to suggest that optimism can have a direct effect on health, which should encourage both the medical profession and individuals to do more to foster optimism as a potential health benefit.

According to Dr Alan Rozanski, one of the field's primary researchers, "It's never too early and it's never too late to foster optimism. From teenagers to people in their 90s, all have better outcomes if they're optimistic."

Rozanski is a cardiologist at Mount Sinai St Luke's Hospital in New York who became interested in optimism while working in a cardiac rehabilitation program early in his career.

In an interview, he explained, "Many heart-attack patients who had long been sedentary would come into the gym and say 'I can't do that!' But I would put them on the treadmill, start off slowly and gradually build them up. Their attitude improved, they became more confident. One woman in her 70s said her heart attack may have been the best thing that had happened to her because it transformed what she thought she could do."

In a major analysis of 15 studies involving 229,391 participants published in September in JAMA Network Open, Rozanski and colleagues found that people who ranked high in optimism were much less likely to have a heart attack or other cardiovascular event and had a lower mortality rate from any cause than did pessimistic participants in the studies.

"The data are very consistent," he said. "In every case, there was a strong relationship between optimism and a lower risk of disease. Optimists tend to take better care of their health. They're more likely to exercise and eat better and are less likely to smoke."

Rozanski added, "There's also a biological effect. Pessimists bathe their bodies in damaging stress hormones like cortisol and norepinephrine all day long. Pessimism increases inflammation in the body and fosters metabolic abnormalities like diabetes. Pessimism is also on the way to depression, which the American Heart Association considers a risk factor for cardiovascular disease."

From teenagers to people in their 90s, all have better outcomes if they're optimistic.

Another researcher, Julia K Boehm, a psychologist at Chapman University in Orange, California, said: "Optimism promotes problem-solving. It helps people deal with challenges and obstacles in more effective ways. Optimists tend to pursue strategies that make a rosy future a reality. Their hearts are not constantly pounding."

In contrast, she said, "Pessimists tend not to be open to the possibility of favourable outcomes, and the fight-or-flight response they experience amps up bodily systems that over a long period of time wear the body down."

Boehm and colleagues examined the association of optimism with three health behaviours — physical activity, diet and cigarette smoking — and found that more optimistic individuals were more likely to engage in healthier behaviours. Their findings were published in 2018 in Circulation Research.

Lewina O Lee, an assistant professor of psychiatry at Boston University School of Medicine, and colleagues analysed several decades of data from US women in the Nurses' Health Study and US men in the Veterans Affairs Normative Aging Study.

In an interview, Lee said that optimists are better able than pessimists to reframe challenging circumstances and react to them in less stressful ways. They're also more likely to embrace a can-do attitude toward life and persist in trying to overcome obstacles rather than think there's nothing they can do about a bad situation, she said.

Although the evidence indicates that a person's outlook on life tends to stay stable over time, given the potential health benefits of optimism, I asked Rozanski if there might be a way to foster greater optimism in chronic pessimists.

He cited the tenets of cognitive behavioural therapy, which can help people develop better coping skills and counter negative thoughts.

"Our thinking is habitual, not conscious, so the first step is to learn to catch yourself when thinking negatively and make a commitment to change how you look at things," he advised. "Recognise that the way you're thinking is not necessarily the only way to think about a situation. Just that thought alone can decrease the toxic effect of negativity. Step two is to substitute a better thought that is credible."

Rozanski likened the practice to increasing muscle strength, "gradually building a 'muscle' of positive thinking, for example, by trying to feel more grateful".