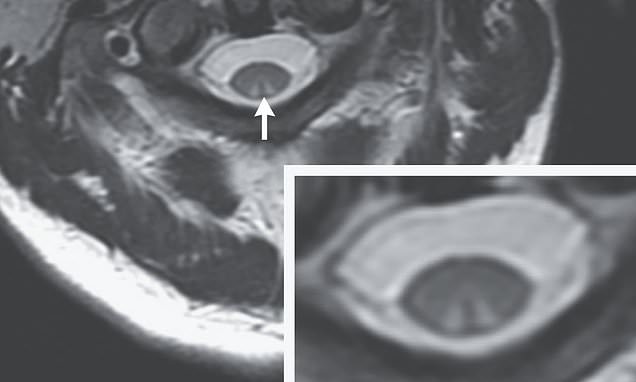 Man, 32, was left partially paralyzed after rampant use of ‘whippets’ caused severe nerve and spine damage

The unnamed man went to the emergency room six weeks after he started to feel a tingling sensation in his arms and two weeks after he lost use of his legs. Doctors found that he was suffering from subacute combined degeneration (SCD) – a condition where a person’s spine begins to degenerate as a result of a b12 deficiency.

The man had recently using whippets. The devices have become popular among teens in the U.S. and the UK in recent years. Used for foods like whipped cream, the nitrous oxide containers can be cracked open and inhaled for a short but intense high. Individual canisters are cheap and can easily be purchased in bulk. Whipped cream cans have a nitrous oxide canister in them as well that can be used.

In response to growing use of the inhalant, officials in New York banned the purchase of nitrous oxide chargers for people under the age of 21. In the UK, doctors are warning of a ‘hippy crack’ epidemic as youngsters in particular are likely to suffer severe brain development issues in the future.

A 32-year-old man started to feel tingling in his arms and lost function in his legs after he started to use whippets. An MRI detected a hyperintensity on his spine, indicating that his use of the gas had caused him to develop SCD

The case report was published last week in the New England Journal of Medicine.

The unnamed man had started using nitrous oxide two months before he went to seek out medical attention, and only two weeks of the frequent use went by before he first started feeling tingling in his arms.

Weeks after the tingles began he started to lose function in his legs.

At the hospital, he performed a Romberg test – where a patient attempts to keep their balance while standing up straight with their eyes closed. It is a basic test to gauge sensory function.

He lost balance during the test, indicating he was suffering some sort of sensory or cognitive issue.

Doctors also noted he had other balance issues, and struggled to feel vibrations against his body – further indication of nervous system issues.

An MRI scan detected a hyperintensity in his spine. Further testing found that he was suffering a severe vitamin b12 deficiency, and as a result developed SCD.

Use of nitrous oxide canisters are a known cause of vitamin b12 deficiency and the gas can inactivate it in the body.

The vitamin is crucial for maintaining nerve cells in the brain and spinal cord and deficiencies put a person at risk of severe issues in the nervous system.

These dangers have many officials terrified as use of the gas canisters has become more frequent in the U.S. 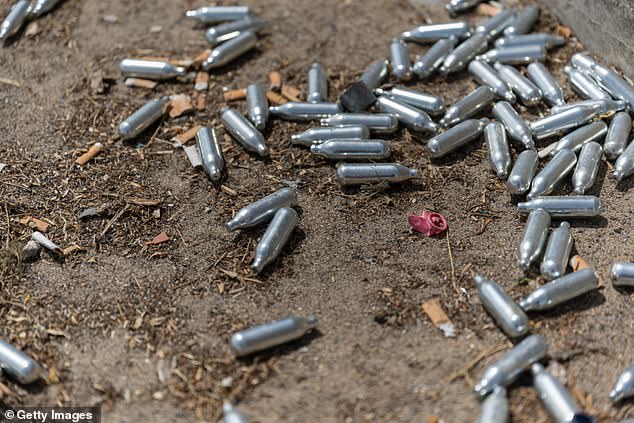 Nitrous oxide chargers – often called whippets – can be inhaled to get a quick high. Many youngsters are starting to use the devices in the U.S. and UK, worrying health officials (file photo)

To combat the increasing use of whippets – studies find that one-in-five Americans have used them before 13 – New York officials have banned the purchase of the nitrous chargers before age 21.

‘This new law is an important step in combating a significant problem for many neighborhoods throughout my district,’ Democratic state Sen Joseph Addabo, who sponsored the bill, said.

‘The need to limit the access and sale of (whippets) first became apparent to me after I had been receiving constituent complaints about empty (whippets) on neighborhood streets.

‘Used (whippets) piling up in our communities are not only an eyesore but also indicative of a significant nitrous oxide abuse problem.’