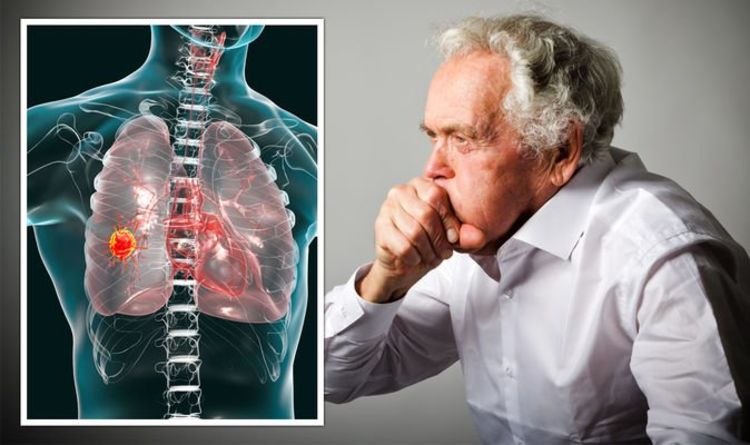 Spotting the warning signs of lung cancer early on before the disease begins to spread and become more aggressive gives you the best chance at successful treatment. The symptoms of lung cancer can sometimes be missed, or written off, but you must see a doctor if you spot any of these symptoms.

On an average day in the UK, 130 people will be diagnosed with lung cancer, the third most common cancer in Britain.

There are around 47,800 new lung cancer cases in the UK every year, according to statistics from Cancer Research.

As with all cancers, early diagnosis is vital for the best chance of successful treatment and survival.

So, what are the warning signs of lung cancer to look out for?

One of the most well-known symptoms of lung cancer is a persistent cough.

The NHS said if your cough doesn’t go away after two or three weeks, to come and get it checked out.

It also warns a cough you’ve had for a while which keeps getting worse could be cause for concern, as well as coughing up blood.

The type of cough can vary based on the person, but in some cases a lung cancer cough can be accompanied by a wheezing or rattling noise.

However, you shouldn’t judge the severity of your cough on the sound it makes – if it persists, make an appointment to see a doctor.

What are the other symptoms of lung cancer?

According to the NHS, the main symptoms of lung cancer are:

DON’T MISS:
Supplements: The vitamin linked to a 22% greater risk of stroke [UPDATE]
Cancer symptoms: The warning sign to spot when looking at your eyes [INSIGHT]
Lung cancer signs: Symptoms that might show up on different body parts [ANALYSIS]

Certain lifestyle factors can put you at greater risk of developing lung cancer.

Around 70 percent of lung cancer cases are caused by smoking.

Smoking 25 cigarettes a day increases your risk of lung cancer 25 times, according to the NHS.

Although most cases of lung cancer are linked to smoking, you can develop lung cancer even if you’ve never been a smoker.

Lung cancer is fairly rare in people under the age of 40, whereas four out of 10 cases are diagnosed in people aged over 75.