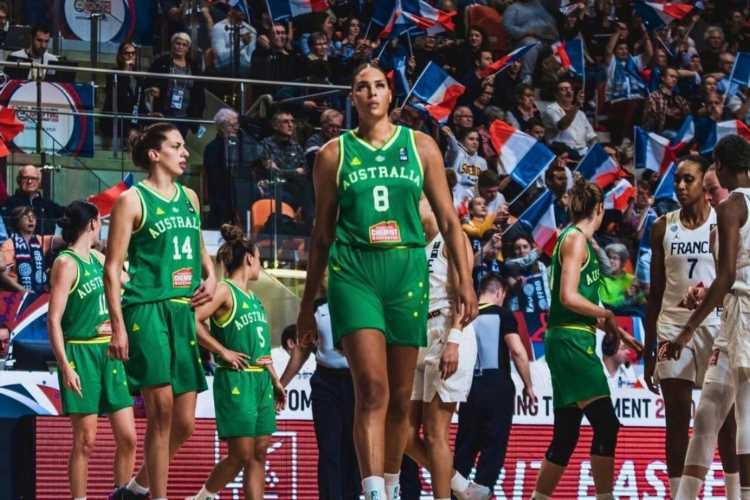 Australian Opals star Liz Cambage should be focused on the Tokyo Olympics. Considered one of the biggest talents in the world of basketball, Cambage has continued to find success in the sport since making her international debut in 2008. It was Cambage who guided the Opals to a bronze medal and who became the first player ever to dunk in the women’s Olympic competition at London’s 2012 Games and though the accolades have followed since, all eyes will once again be on Cambage in Tokyo. But the basketball star is instead using her platform to criticise the lack of diversity in Australian media, adding that she will be boycotting the Tokyo Olympic Games as a result.

The announcement comes after Cambage accused the AOC of “whitewashing”, a critique that came when two promotional photos were released of several members of the upcoming Olympic team. Despite the range of athletes involved, just one athlete of colour is featured. Alongside an ad for the underwear brand Jockey, Cambage wrote: “I’ve said it once. I’ve said it a million Tims. HOW AM I MEANT TO REPRESENT A COUNTRY THAT DOESN’T EVEN REPRESENT ME #whitewashedaustralia.” She went on to add, “Y’all really do anything to remove POCs from the forefront when it’s black athletes leading the pack until I see you doing more @ausolympicteam imma sit this one out.”

Cambage also commented on a photo of the Olympic team showcasing the upcoming uniform designed by Asics in which she said, “also fake tan doesn’t equal diversity.” She has since apologised for her comment, after the photo was shown to have included Indigenous rugby sevens player Maurice Longbottom, wearing an Olympic shirt featuring Aboriginal artwork designed by Yuggera man Paul Fleming who represented Australia as a boxer at the 2008 Olympics.

“To Mr Longbottom, I’m sorry that you got caught up in this. I did not think you had fake tan on, I was never saying that, I was saying that for the rest of the photo,” said Cambage in apology. “I’m so sorry from the bottom of my hear that things got twisted today and the media used you as a tool to defer from the real issue – that Australia is ignorant.”

Cambage’s message certainly is a poignant one and while it’s an experience she has lived throughout her sporting career, the AOC’s response seems far from apologetic. “The AOC acknowledges Liz Cambage’s point with regard to this particular photoshoot. The athletes made available to Jockey could and should have better reflected the rich diversity of athletes who represent Australia at the Olympics.”

The statement continued: “The AOC does however have a very proud history of celebrating and promoting diversity in all its forms. From Indigenous reconciliation, people of colour, gender equality and all forms of diversity, the AOC is rightly proud of its record.”

Cambage responded to the statement with a passionate response posted to her Instagram Stories in which she wrote: “Australia, wake the f*ck up. I’m not playing these games no more, I’m not. You can try and twist my words however you want. It’s not going to work. I’m not taking any media, I’m not doing any interviews. I’m not talking to you. Listen here.”

She added, “One token POC in a photo is not good enough at AOC. That’s what I’m talking about.” For Cambage, the apology didn’t mean “anything” and clearly, it won’t until the AOC changes their ways and makes an effort to reflect the great diversity we have here in Australia, and naturally the diversity we have across sport. Sport is, after all, a perspective through which we can see the world and learn from others and yet sadly, the track record here in Australia leaves little to be desired when it comes to POC and women in sport where unequal pay continues to blanket most sporting competitions.

“I saw the apology, words don’t mean anything to me, actions mean something to me. So let me see it. Because until then I’m not buying shit. And that’s just how it is. And I’m going to keep talking my shit because I’m doing it for the little girls and little boys who are people of colour. Asian, black, indigenous – wherever you’re from in this whole world. It’s important to see people who look like you in the media. And white Australia, you would never understand that, because you’ve never had to deal with it.”