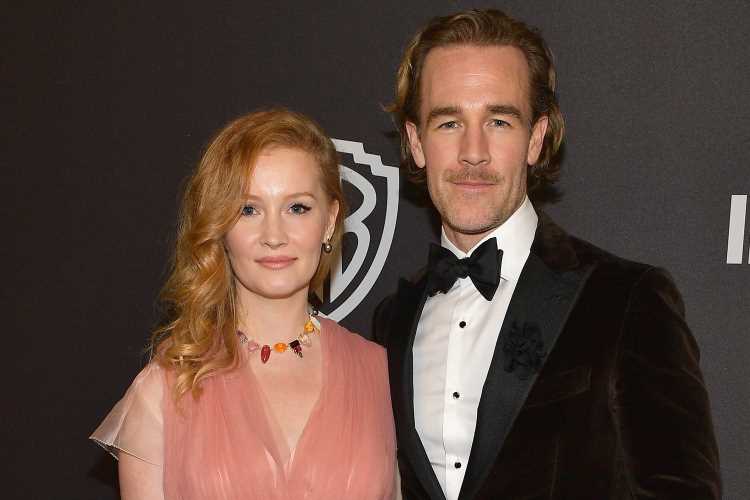 James Van Der Beek is reflecting on the "grace" he found after he and wife Kimberly suffered a pregnancy loss days before he performed on Dancing with the Stars last year.

On Nov. 17, 2019, Kimberly was hospitalized after suffering a miscarriage at 17 weeks, losing their son, whom they later revealed they named John. After being encouraged to by his wife, James appeared on the DWTS semifinals episode one day later, when he was eliminated from the competition series after revealing the sad news.

In an emotional Instagram post on Wednesday, James, 43, reflected on the heartbreak one year later, writing that the family tragedy helped him put things into perspective.

"Been feeling my way around how to talk about this moment for some time, now… one year ago today," he began the caption. "This was less than 48 hours after witnessing an 18-week #pregnancyloss in our shower and rushing @vanderkimberly to the hospital. 12 hours after missing all of camera blocking thinking I wouldn’t dance, but then changing my mind after Kim said, 'I'm not done watching you dance, I want to see that samba again in the Finals next week.' "

"This was ½ an hour after the judges pretended to not know what was going on with me after I tried to fake my way through a cha-cha with a broken heart, and just moments after they'd chosen to send a different contestant to the finals, who – along with everyone else in the room – was shocked at their decision and tried to give me her spot live on air (@allybrooke is an angel ❤️)."

The Dawson's Creek actor said that moment at any other stage in his life would have resulted in him feeling "injustice, frustration, anger, pain." Instead, he cheered on Ally Brooke. "I point out all of this only to say that at perhaps any other stage in life, my demeanor in this moment would not have been so serene," James said. "I would've felt injustice, frustration, anger, pain… but what came over me as I comforted my partner and told Ally no way was I taking her spot… was grace."

"A grace, which – to be honest – I had not been fully in touch with prior to losing that little boy. And this might sound crazy to some… but I feel like that was his gift to me," he continued. "That was one of the things his soul came here to unlock: He gave me access to grace."

James — who shares children Gwendolyn, 2, Emilia, 4½, Annabel Leah, 6½, Joshua, 8½, and Olivia, 10, with Kimberly — said he is sharing these feelings with his followers since "we're all going through something."

"… And for many of us it’s much more dire than a celebrity dance show – but the mystics talk about the cure being IN the disease… and whether or not that’s true in every situation, on behalf of the son I’ll only ever hold in my heart… I’d like to invite us all to the possibility that it just might be," he wrote.

In June, the actor revealed the heartbreaking news that his wife had suffered another miscarriage. "After suffering a brutal, very public miscarriage last November, we were overjoyed to learn we were pregnant," he said at the time. "This time, we kept the news to ourselves. But last weekend, once again, 17 weeks in… the soul we'd been excited to welcome into the world had lessons for our family that did not include joining us in a living physical body."

Earlier this week, Kimberly reflected on her November 2019 miscarriage, as well as the June 2020 loss of their son, whom they named Zachariah.

"Tomorrow, Nov 17th marks one year after I was taken to the hospital after a 17 week miscarriage put my life on the line," she began. "It took two hours to stabilize me. My life was saved by blood donors and hospital staff. Tomorrow, Nov. 17th also marks the due date of a baby I met far too early as I had another miscarriage at 17 weeks along, June 14th."

"Blood transfusions saved my life a second time," she continued. "… We are getting into the holidays and there’s been a lot of distress in the world. If you’re healthy and motivated, please consider donating blood tomorrow or sometime soon. Please share far and wide and let’s fill those blood banks up for the holidays. THANK YOU DONORS!!! ❤️."