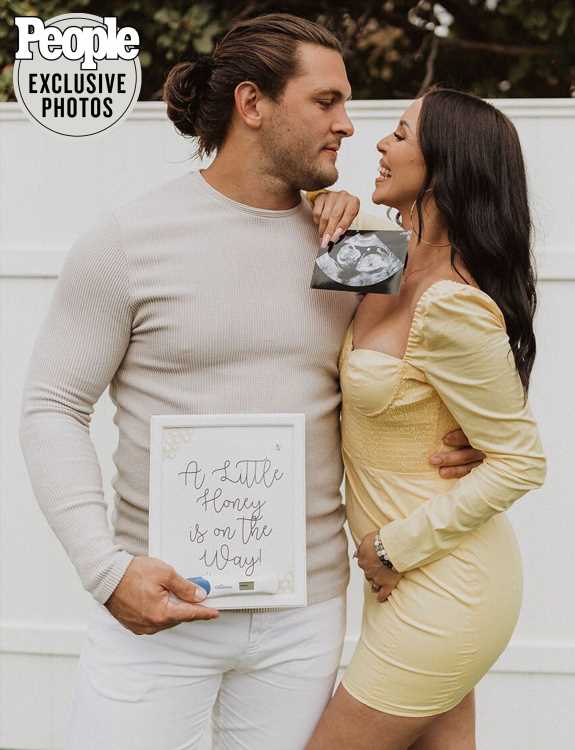 The Vanderpump Rules star, 35, reveals in this week's issue of PEOPLE that she and boyfriend Brock Honey Davies are expecting their first child together, after previously sharing in June that she had suffered a miscarriage.

"We got pregnant so quickly," says Shay. "My doctor told me to wait one period and ovulation cycle and then we could try again. It was the first and only time we tried and I had a feeling right away, but it was so soon to tell because I wasn't even close to missing my period yet. I just had a feeling."

As the couple was planning to head out on a trip to Sedona, Arizona, full of high-impact activities like off-roading, Shay opted to take a Clearblue Digital Pregnancy Test just in case — and the mom-to-be recalls "bawling [her] eyes out" upon seeing a positive result.

"I had to know before I missed my period and we went on this trip," she tells PEOPLE. "We still had an amazing trip, but it just all happened so quickly, which is so exciting but also really scary after having a miscarriage." "After going through the miscarriage and knowing those signs," this time around, "it was comforting knowing, 'Okay, you're not spotting, you're not cramping, you still feel pregnant, you're still tired, your boobs still hurt.' "

"I had to keep convincing myself it's okay because last time I woke up one day and there's no other way to explain it, just that I didn't feel pregnant anymore," the Bravo star recalls. "I told my mom that and her heart broke because before my sister, she too had a miscarriage and the same thing — she said she just felt not pregnant one day."

"After a miscarriage, I was definitely even more aware of my body, but just so much more cautious and scared … I was just too afraid to lift up a 5 lb. weight. I was like, 'But what if that makes me have a miscarriage?' " Shay says. "It was every little thing, which I'm sure was driving Brock crazy because he's like, 'You're fine!' But I was just like, 'I need to make sure, I need to make sure' — and now we've made sure! Everything is good."

It helps the mom-to-be to keep up with her blood work — particularly her levels of progesterone — which gives her "anxiety" beforehand, but also peace of mind. In fact, her doctor even put her on supplemental doses of the hormone for a few weeks to give her a bit of a boost in that area.

"Once I got to 10 weeks, I went in for my appointment and [the doctor was] like, 'You can stop the progesterone now,' " Shay tells PEOPLE. "And I was like, 'But I'm not in my second trimester yet,' and he's like, 'Well, I just did an ultrasound; the placenta is giving the baby nutrients now. Your progesterone is being provided through there.' And I was just like, 'But are you sure?' I was questioning my doctor because I'm just so paranoid and he's like, 'You're fine, stop taking it, relax, start working out again.' " Shay wants other women struggling with infertility and/or pregnancy loss to know that there are so many options on the road to parenthood, and has a big message from the heart: "Don't give up."

"There's so many alternative ways: Freeze your eggs, try [in vitro fertilization]," she says. "If that doesn't work, there's always adoption; there's so many kids in foster care who need to be adopted and need homes. There's always a way. If you truly want to be a mom, don't give up."

She also wants other hopeful mothers to know that their pain is not measured by how someone else feels based on how far along their pregnancies were: "I had so many people being like, 'Well, you were only six and a half weeks, at least you didn't hear the heartbeat yet.' And I'm like, 'I still was pregnant. I still planned a whole life for this baby. It doesn't matter if I was six and a half weeks or 12 and a half, I still lost something.' "

"I really have wanted to put that out there — that you're not alone, I feel your pain and I would not wish this on my worst enemy," Shay adds. "It's the absolute worst thing a woman can go through. I have always been an open book and really wanted to share my story so women know that I feel your pain and me too."

As for her own situation now, "Being a mom is something that I didn't think was necessarily going to be possible for me, which is why I froze my eggs twice last year," she tells PEOPLE. "I didn't know that I would be able to get pregnant on my own so I'm just so excited that we were able to do this naturally and that everything looks good. I'm so excited to have a healthy baby and hug my baby and just be a mom."

For more from Scheana Shay, pick up the latest issue of PEOPLE, on newsstands Friday.