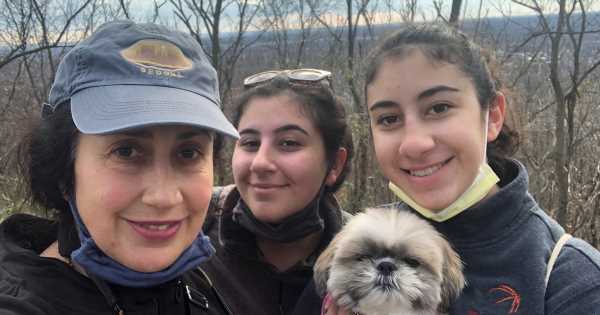 Margaret with her daughters Taline and Nora, after adopting Cosette.

In April 2020, Margaret J. suffered the greatest loss of her life when her husband of 21 years—and father to their two daughters, Taline, 20, and Nora, 17—died of COVID-19.

“He was my Harry,” says Margaret about her husband, who emigrated to the United States from Armenia when he was 12 and worked as a sales manager during his adulthood.

“After Harry passed, the girls and I started talking,” adds Margaret, a medical social worker. “We wanted to share our love with a pet.”

Taline made inquiries at animal shelters near the family’s Nutley, New Jersey home, but found few available pets. Friends of the family then made calls to the ASPCA on Margaret’s behalf.

Margaret with her daughters Taline and Nora, after adopting Cosette.

An underweight Shih Tzu with a history of neglect, Cosette suffered from severe hair matting and a strangulating hair mat that reduced the blood flow to the lower part of her right hind leg.

“Kris was very upfront with us,” Margaret says. “She showed us photos and told us that Cosette’s right leg might have to be amputated.”

But Margaret and her daughters were willing to do whatever it took to adopt and care for the pint-sized pooch.

“We didn’t see any deficiencies,” she says. “Just Cosette, a dog who wanted to be loved.”

In mid-July, Cosette was surrendered to Animal Care Centers of New York (ACC) by her previous owner. An ACC veterinarian noted her emaciated body condition, an unkempt hair coat overgrown around her face and densely matted hair over her lower limbs which was caked with feces and urine.

Cosette upon her surrender to Animal Care Centers of NYC.

She also had a maggot-infested wound on her right back foot. The wound was from a band of matted hair that was wrapped tightly around the lower limb. The band of matted hair, also known as a strangulating hair mat, had tightened over time, acting like a tourniquet, cutting off the blood supply to her lower leg. 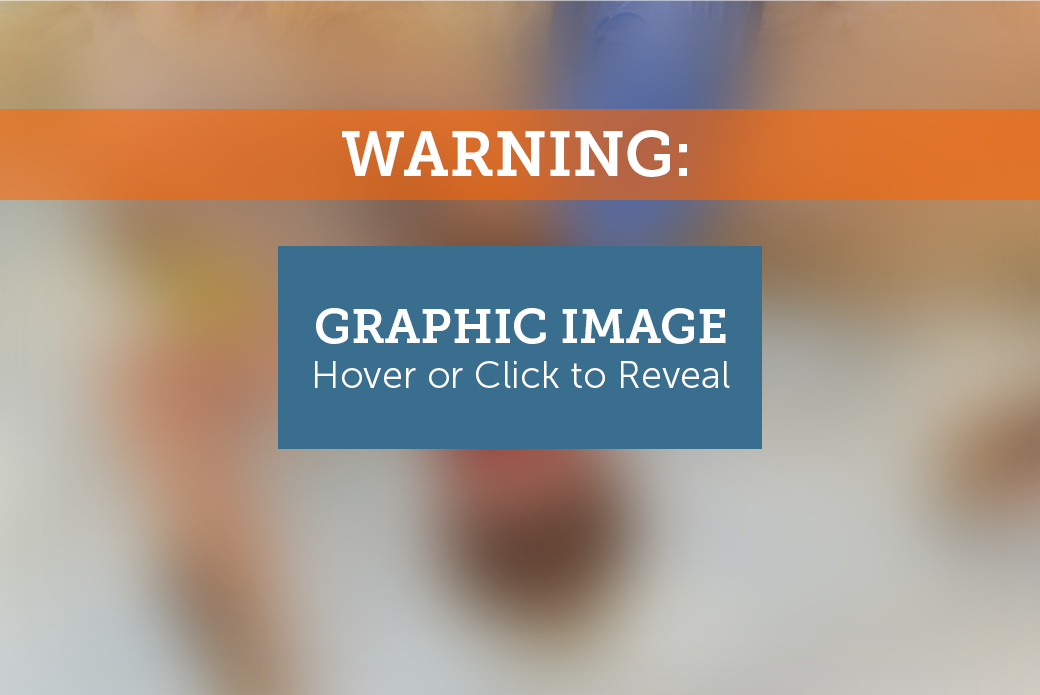 A strangulating hair mat cut off the blood supply to Cosette’s lower leg and resulted in a serious wound on her right hind foot.

At ACC, Cosette’s dense hair mats were shaved, and the wound on her hindfoot was bandaged. She was transported the next day to the ASPCA Animal Hospital (AAH) for a medical evaluation and continued treatment.

“She had a hard start in life,” says Dr. Laura Niestat, a Forensic Veterinarian who examined Cosette when she arrived at the ASPCA. “Her hair coat was foul-smelling, dirty and dry and her skin was very inflamed. She was in so much pain that she tried to bite us.” 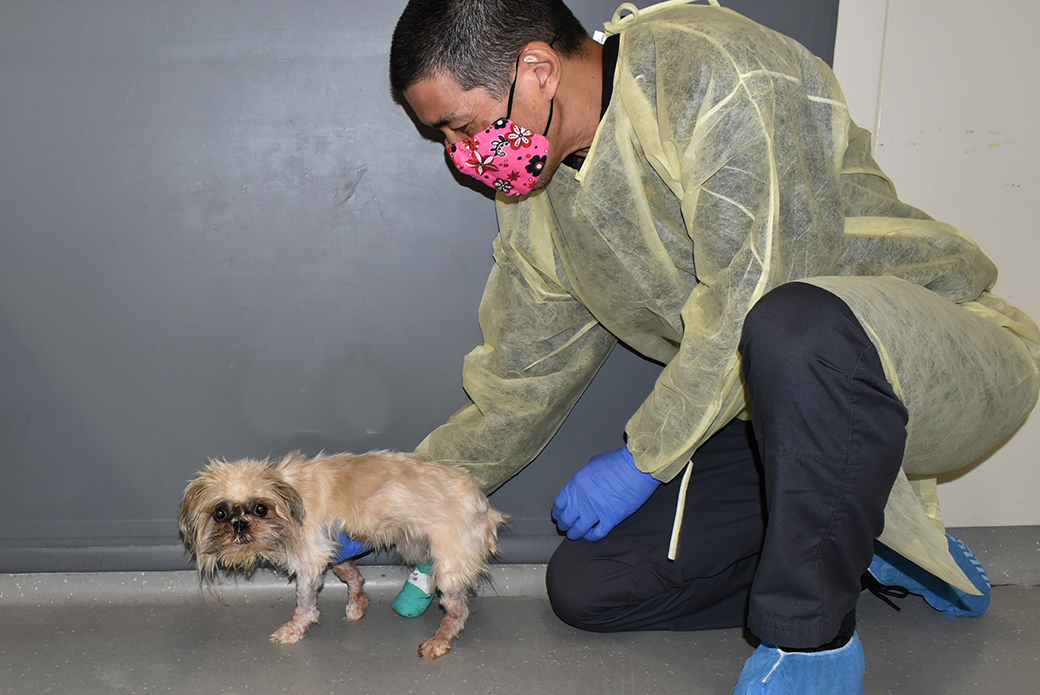 Cosette upon her arrival at the ASPCA, with Eric Lee, Veterinary Forensic Science Coordinator.

Dr. Niestat and the ARC team sedated Cosette, who weighed just 6.6 lb., and treated her strangulating hair mat wound with antibiotics, pain medication and frequent bandage changes. She was also treated for painful ear infections, a rash and itchy skin. On August 6, Cosette was spayed and underwent dental surgery.

The Dangers of Matted Hair

Hair matting is more than just a cosmetic problem and is often the most visible sign of an animal that has not received adequate care. Dense hair mats cause pain and discomfort as the mats pull at the skin every time the dog moves. 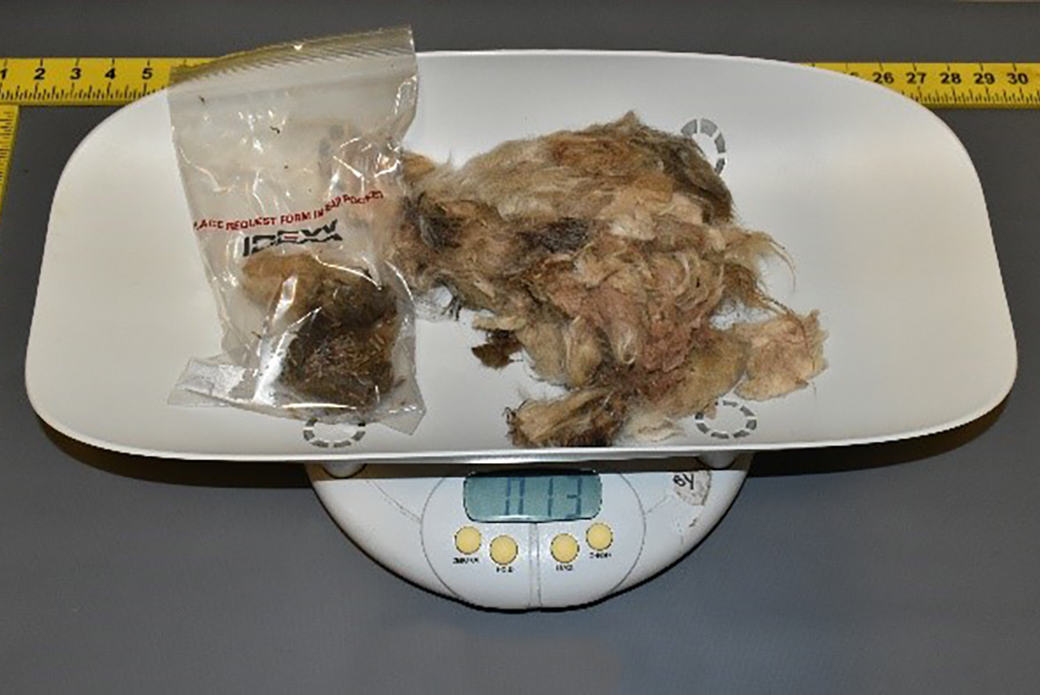 Cosette’s hair mats were weighed after she was shaved.

“All dogs require regular brushing, bathing and nail trimming to maintain a healthy hair coat, skin and nails,” says Dr. Niestat. “Some breeds require more intensive grooming than others. “When a dog like Cosette is not regularly groomed, hair mats can form over a period of weeks to months. Initially, the hair coat becomes tangled, and over time the tangles can progress to dense matting. Hair mats commonly become stained and heavily soiled causing skin infections and other serious medical problems.”

A study of strangulating hair mats in dogs co-authored by Dr. Niestat recommends that dogs with strangulating hair mats be X-rayed to determine if skeletal changes have occurred. In Cosette’s case, X-rays showed the pressure of her strangulating mat had reduced the blood supply to her bones, resulting in bone loss. Her right thigh muscle had atrophied, and she lost bone density in her right back leg due to her not using her leg normally.

Despite these complications, Cosette’s leg wound healed, averting an amputation.

Margaret and her daughters met Cosette on a Sunday afternoon at the ASPCA.

“She approached each one of us as we sat on the floor,” Margaret says. “She let me pet her, then approached Taline, and then Nora, who cried. The interaction between the two of them was beautiful.” 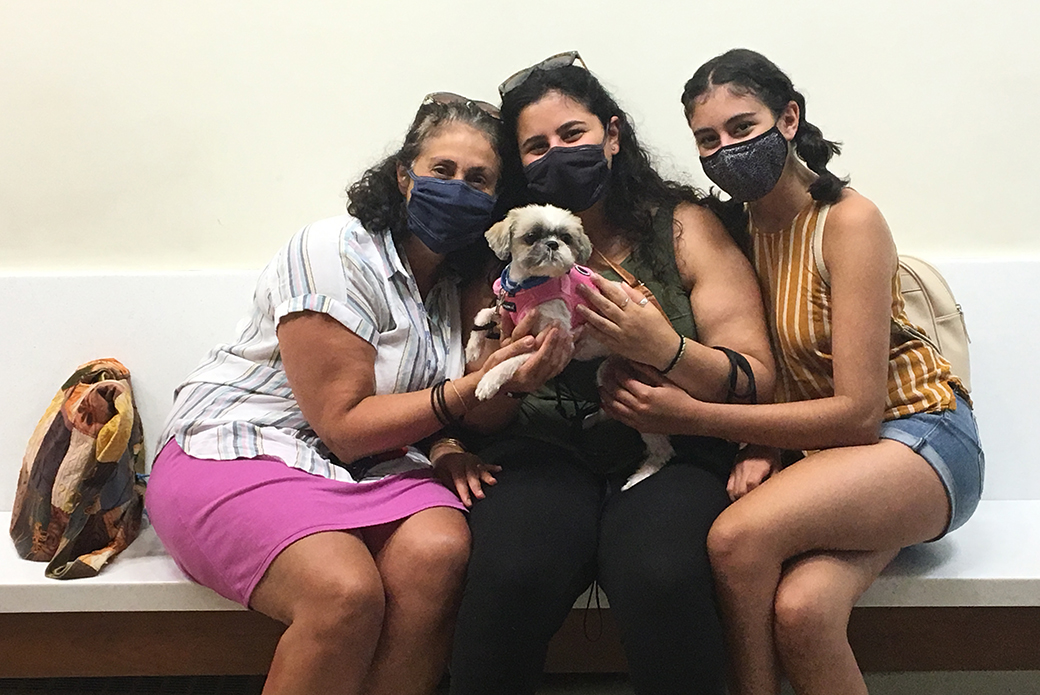 Cosette with Margaret, Taline, and Nora on adoption day.

At home, Cosette gets brushing daily and conditioner during baths so her hair stays soft and detangled. Now 11 lb., she has nearly doubled her weight.

“She’s growing into her personality, too,” says Margaret. “We’re a household of four women now.”

“In the morning we cuddle until it’s time for me to get up,” says Nora, a high school senior.

Taline says Cosette served as her “study buddy,” making cameos on Zoom calls as Taline completed most of her third year at Rutgers University remotely, dialing in for lectures and presentations.

“Cosette brought a sense of beginning and newness to our family,” says Margaret. “She has been a big part of our healing process.”

Margaret takes inspiration from the Carly Simon song “Coming Around Again,” which she says speaks to her family’s experiences with Cosette: Don’t mind if I fall apart, there’s more room in a broken heart. 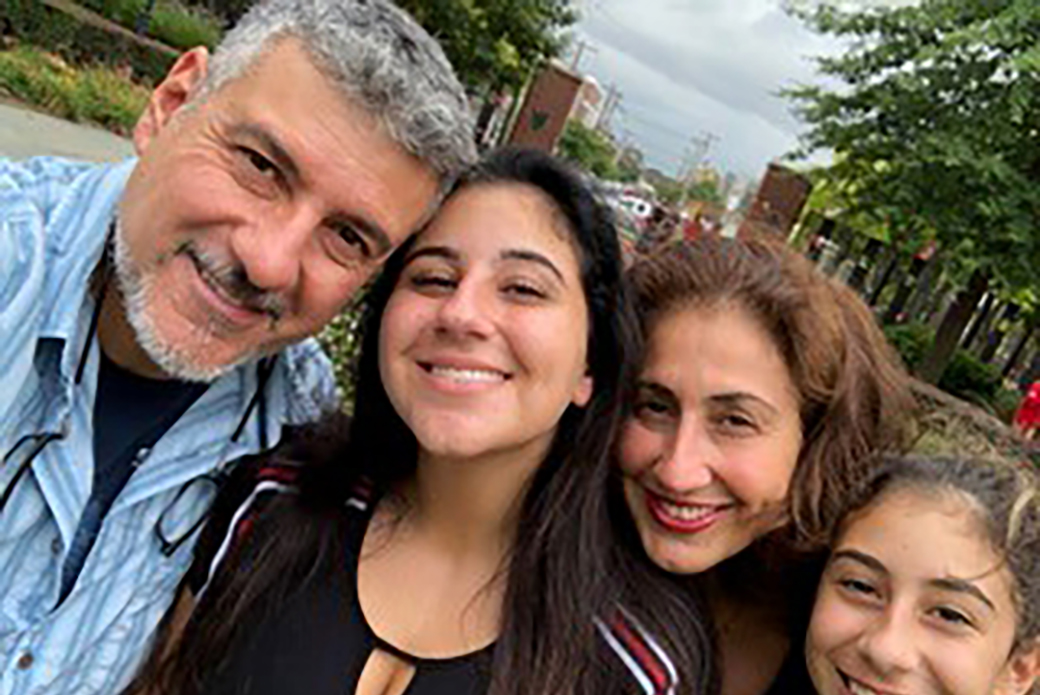 Margaret and her daughters with Harry in the fall of 2018.

“It’s so true —our hearts expanded with love for Cosette,” Margaret says. “She helped heal our pain and came from a place where she needed healing, too. She needed us as much as we needed her.”