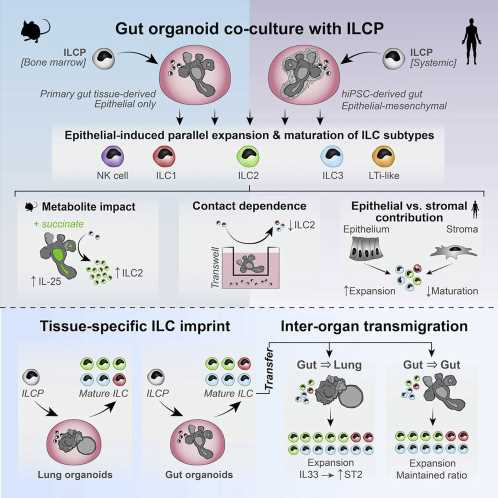 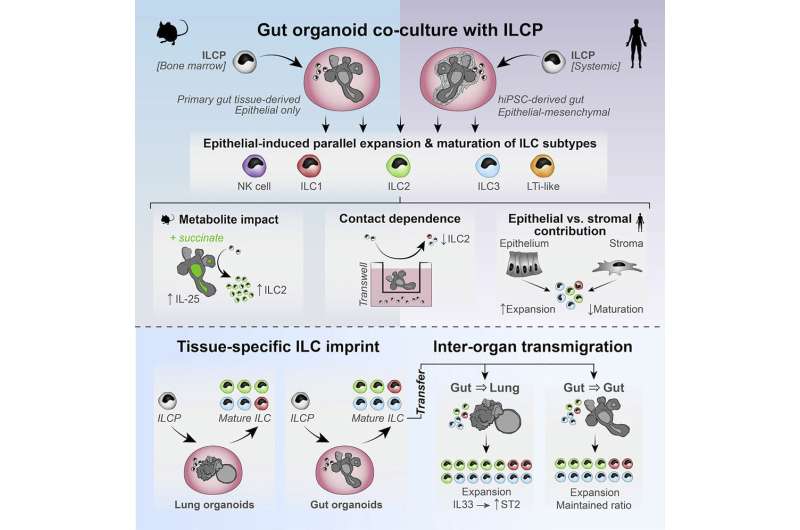 King’s researchers have found an innovative approach for expanding and maturing innate immune cells in a dish.

As part of her Ph.D. research at King’s, Dr. Geraldine Jowett harnessed this system to show that all ILC subsets can be matured and exponentially expanded in parallel when cultured with these organoids, and that process is dramatically improved when the stroma is depleted, upending gold standard approaches based on immortalized stromal feeder cells.

Dr. Jowett, now a Schmidt Science Fellow at Cambridge University, noted how unexpected the human results were: “Our findings in the murine epithelial-only system were extremely robust and reproducible, but early in the project the human stem cell derived intestinal organoid co-cultures could never compete with the efficiency of the murine model. When we developed the mesenchyme-depletion step, we honestly expected that the non-epithelial fraction would outperform the epithelial organoids, as immortalized mesenchymal cells are the gold standard for in vitro ILC research.”

“The impact of the epithelial cells really blew us away. We suspected from our murine data that epithelial cells were important for tissue-specific ILC imprints, but we would never have suggested that they were a greater driver of maturation than the intestinal mesenchyme. It’s the kind of finding that makes working with organoids so fun and rewarding,” says Dr. Geraldine Jowett.

The study forms the basis for a patent application recently filed by King’s College London, which aims to encompass this exciting new approach for driving innate lymphoid cell maturation.

This cell type is enriched in barrier tissues like the gut, lung, and skin, where it regulates homeostasis, rapid response to infection, cancer surveillance, and tissue regeneration. These immune cells are antigen non-specific, but produce large amounts of cytokines, making them an appealing target for cell therapy approaches. However, expanding them outside of the human body in sufficient numbers has proved to be a bottleneck for this application.

Dr. Joana F Neves, co-senior author of the study, explains, “We started these studies over 8-years ago, and we were incredible pleased when we observed that the organoid driven expansion of immune cells was so efficient in human organoids. This opens an avenue to perform detailed studies in these rare but important immune cells and has the potential to be used for the expansion of these cells for autologous cell therapy.”