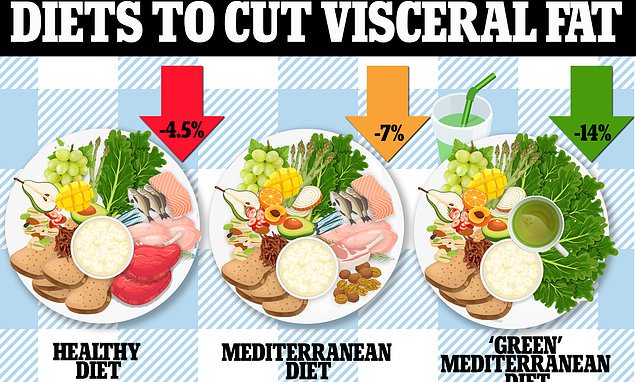 People who follow the ‘green Mediterranean’ diet burn a dangerous type of bodyfat at quadruple the rate of most dieters, a large study has found.

People who followed the mostly plant-based diet for 18 months saw their visceral fat levels shrink by 14 per cent, compared to just 4.5 per cent in a control group who ate a standard healthy diet.

Visceral fat wraps around vital organs and inside the abdomen typically giving someone a beer belly or apple body shape.

This type is the most dangerous because it is thought to release chemicals and hormones into the blood that trigger inflammation, linked to chronic diseases like heart disease and fatty liver disease. Its close proximity to the organs raises the risk.

The Mediterranean diet — high in fats and proteins but low in carbohydrates — has become extremely popular in recent years with a wealth of studies touting its benefits for longevity, reducing frailty and warding off cancer.

The ‘green’ Mediterranean diet still contains plenty of beans, legumes, whole-grains, leafy greens, olive oils, nuts and fish — but swaps out red meat and poultry for three to four cups of green tea and a duckweed shake every day.

Researchers believe polyphenols — plant compounds that protect the body’s tissue against stress — help burn fat, which has been noted in several previous pieces of research.

Dr Hila Zelicha, an obesity expert at the University of Ben-Gurion who was involved in the study, said:  ‘A 14 per cent reduction in visceral fat is a dramatic achievement for making simple changes to your diet and lifestyle.’ 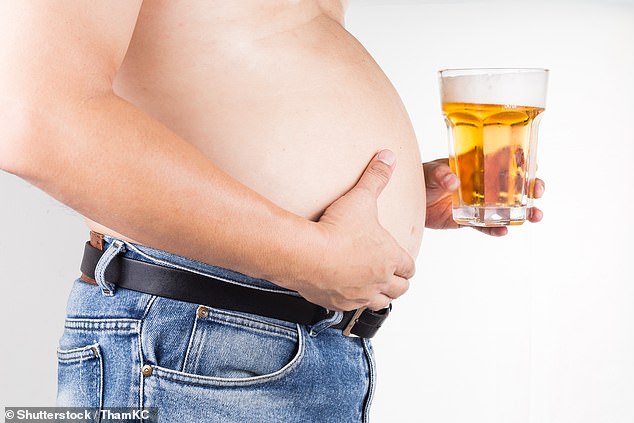 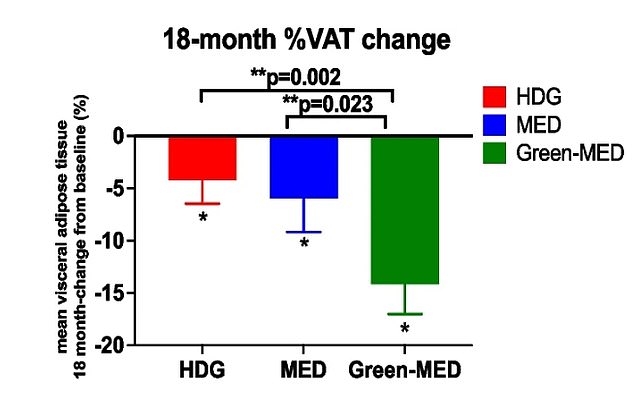 The study — published today in the journal BMC Medicine — was led by researchers at Ben-Gurion University of the Negev, in southern Israel.

A total of 294 adults were recruited who were 50 years old on average and had a BMI of 31 — putting them in the obese category. Nearly nine in ten were men.

They were split into three equal groups to follow the specific diet plan for the study’s duration — from May 2017 to November 2018.

A large-scale study has suggested the ‘green’ Mediterranean diet can lead to a more rapid loss of visceral fat.

This is the most dangerous type of fat because it can wrap around organs and release chemicals that trigger inflammation.

They both had about 40 grams of carbohydrates a day for the first two months, which then rose to 80 grams a day afterwards.

Both groups were also told to consume less red, processed meats and poultry than in the standard Mediterranean diet.

In the standard Mediterranean diet, people are told to consume poultry in low or moderate amounts a few times a week and a red meat one consumed in infrequent and small amounts.

The ‘green’ diet group was also told to consume a 100 gram (g) duckweed shake and three to four cups of green tea once a day.

For comparison, the standard Mediterranean diet told participants to ensure they ate about a handful of walnuts a day,

There is no hard and fast formula for what is in the Mediterranean diet.

But Harvard University said the diet plan tends to include the following:

Two groups were told to follow a variation of the Mediterranean diet.

One followed a ‘green’, plant-based version, and the rest followed a standard Mediterranean diet.

Both groups were told to limit their calorie consumption to up to 1,400 a day for women and 1,800 a day for men.

Instead of the added tea and shake, those in the standard group were asked to eat a handful of walnuts a day.

Both groups were told to eat less than 40 grams of carbohydrates a day — such as whole wheat and beans — for the first two months. This was raised to 80g a day for the rest of the study.

Participants recruited to the healthy diet group were told to loosely follow a Mediterranean diet — consuming lots of fruit and veg — but were not given any calorie restrictions or specific meal plans.

During the study, each group was given 90-minute nutrition lessons every week for the first month and then once a month for the following five.

They were then given every other month until the end of the study.

All were asked to do aerobic and resistance training three to four times a week for 45 to 60 minutes. They were also given free gym memberships to encourage uptake.

MRIs were completed at the start and end of the study to measure visceral fat.

Measurements were also taken of body-weight and waist circumference.

For comparison, those on the standard Mediterranean diet lost 2.7 per cent and 4.7 per cent respectively.

But the differences between total weight loss in the groups were not significant, the researchers said.

It was the visceral fat difference that was noticeable, according to Dr Zelicha, who added: ‘Weight loss is an important goal only if it is accompanied by impressive results in reducing adipose tissue.’

Professor Iris Shai, a nutritionist who led the research and is also at Harvard University, said: ‘We learned from the results of our experiment that the quality of food is no less important than the number of calories consumed and the goal today is to understand the mechanisms of various nutrients.

‘For example, positive ones such as the polyphenols, and negative ones such as empty carbohydrates and processed red meat, on the pace of fat cell differentiation and their aggregation in the viscera.’

The researchers said the ‘green’ diet boosted the levels of polyphenols in the body compared to the others.

They hypothesized that this led to the higher weight loss in the group based on previous studies in mice.

These showed that polyphenols reduced obesity more rapidly in the rodents, which was suggested to be due to the energy needed to digest them and then use them in the body.

The duckweed shake, consumed by those on the green diet, was high in protein, iron B12, vitamins as well as polyphenols.