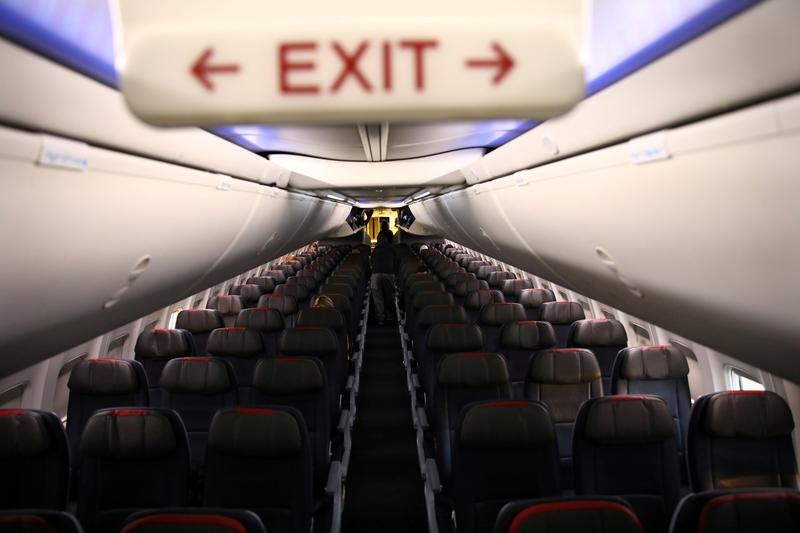 WASHINGTON (Reuters) – The White House is pressing major U.S. airlines to mandate coronavirus vaccines for employees by Dec. 8 and showing no signs of extending the deadline, four sources told Reuters on Friday.

FILE PHOTO: Rows of empty seats of an American Airline flight are seen, as coronavirus disease (COVID-19) disruption continues across the global industry, during a flight between Washington D.C. and Miami, in Washington, U.S., March 18, 2020. REUTERS/Carlos Barria/File Photo

White House COVID-19 response coordinator Jeffrey Zients spoke to the chief executives of American Airlines, Delta Air Lines and Southwest Airlines on Thursday to ensure they were working expeditiously to develop and enforce vaccine requirements ahead of a Dec. 8 deadline for federal contractors, the sources said.

Some airline officials had asked the White House to push back the requirements, signed by President Joe Biden last month, until after the busy holiday travel season.

Zients urged the airlines “to act sooner than later to ensure as smooth of an implementation process as possible,” one source said, and urged them to look at the United Airlines vaccine requirement that was announced in August.

The three airlines separately confirmed the calls took place but declined to discuss the specifics. Zients did not respond to a request for comment on the calls.

“Employers should act now to protect their workforce,” Zients said at a briefing Friday, without directly discussing airlines. “More and more companies are stepping up to make vaccine requirements the standard across all sectors.”

Large U.S. airlines have a number of federal contracts, including the Civil Reserve Air Fleet (CRAF), which was activated in August to help ferry people who have been evacuated from Afghanistan in support of the U.S. Defense Department.

The Biden administration notified carriers on Thursday it would seek a modification of those CRAF contracts to require vaccinations of airline employees, sources told Reuters.

Other government agencies are also expected to seek amendments to contracts with airlines.

Alaska Airlines said Friday it would comply with the federal contractor vaccine requirements, saying it believes it and other major U.S. airlines are covered by the executive order.

Alaska said it “means all of our employees, including  certain  contractors and vendors, will be required to be fully vaccinated, or be approved for a reasonable accommodation such as medical conditions or religious beliefs that prevent them from being vaccinated.”

It added: “The date by which employees must be fully vaccinated has not been confirmed by the government, but it could be as early at Dec. 8.”

The Federal Acquisition Regulatory Council is expected to issue guidance on exemptions on Oct. 8, sources said.

United Airlines on Thursday said 99.5% of U.S.-based employees now have been vaccinated against COVID-19, excluding those who have sought an exemption.

The Chicago-based carrier said only 320 U.S.-based staff are now not in compliance with its COVID-19 vaccination policy, marking a 46% drop in the past two days.

United, which in early August became the first U.S. carrier to require COVID-19 vaccinations for all domestic employees, had asked staff to provide proof of vaccination by Monday or face termination.