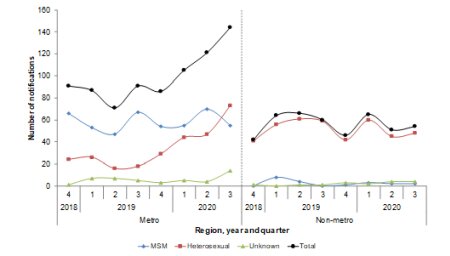 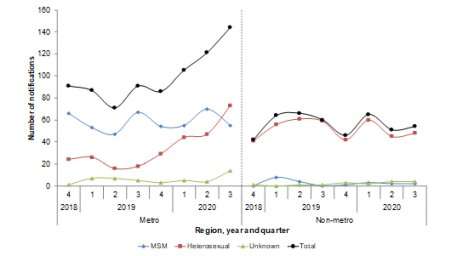 Throughout 2020, many scientists were focused on COVID-19. But all this time, another infection has been spreading quietly throughout WA …

Be honest. Before January 2020, did you know what an epidemiologist was?

For those who’ve been socially distancing under a rock, epidemiology is “the method used to find the causes of health outcomes and diseases in populations”. Basically, they’re the clever people who work out what to do when a dangerous disease, virus or infection is making its way through a population.

Throughout 2020, most epidemiologists have been rightly focused on COVID-19. But all this time, another infection has been spreading quietly throughout WA …

According to the WA AIDS Council, there has been a 40% increase for men who have sex with men, and it has more than doubled for those who identify as heterosexual.

And while epidemiologists have been working hard to understand how it’s spreading, there are challenges that make tracking an STI different than COVID-19.

According to Joe Staniszewski, Practice Manager and Clinical Nurse Consultant at M Clinic, men who have sex with men have shown higher numbers of syphilis for the past 5–10 years.

“But in the past year or two, we have started to see rising numbers in other population groups,” says Joe.

“We have seen the disease spread from Northern Queensland through the North of Australia and down to Perth and Mandurah.”

OK, syphilis is back. That’s bad. But you’re probably thinking if they’ve tracked it that far, then surely they’re all over it?

Unfortunately, it’s complicated. While they have successfully tracked the infection across the country, it’s hard to know where it’s going next.

Take a look at the graph below (from these Department of Health reports), which shows the number of cases over the past few years. The peak is early 2020—right in the middle of the COVID-19 lockdown.

You’d think in a lockdown people would have fewer sexual partners, which would lead to fewer infections. But that’s not the case at all.

“Over 50% of people with infectious syphilis had a low number of partners over the previous 6 months,” says Joe.

“The rises have primarily occurred within groups of people who don’t test regularly or don’t have ready access to healthcare.”

Now we’re starting to see how difficult it is to track sexually transmitted infections.

And it gets more difficult.

The troubles of tracing a syphilis outbreak

When looking at how an infection spreads through a population, it’s tempting to break the population into little groups. But when you’re dealing with people’s sex lives, things aren’t so neat.

Professor Donna Mak is a public health physician and medical epidemiologist at the Department of Health. “You can look at demographic groups like age, gender at birth or where people live. But there is not always a 100% correlation between how people identify and how they behave,” she says.

“For example, someone might identify as heterosexual, but how they behave is quite different.”

Public health also doesn’t exist in a vacuum. Social attitudes can impact people’s willingness to be honest about their sexual history and sexual health. 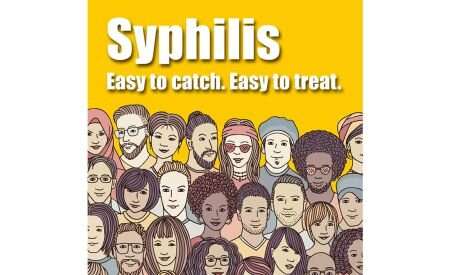 According to Joe, another issue is a lack of education among health practitioners about the prevalence of syphilis, which can lead to less testing for people who need it.

“Some groups with rising numbers are not even on clinicians’ radar as being at risk,” says Joe.

This can include groups not typically thought of as vulnerable to health risks, such as white cisgendered men or even pregnant women.

“Pregnant women receive plenty of medical attention through different trimesters but are not given routine syphilis testing.”

Undetected syphilis can be passed to an unborn child, which can lead to potential organ damage or even stillbirth. Women should feel empowered to request a syphilis test if their doctor or midwife is not proactive in offering it.

So what can people do to be safe?

First of all, it’s important to note that, while syphilis can be serious, it is treatable if detected early.

But that doesn’t mean you don’t need to be careful. Cast your mind back to the posters in your high school sex ed class. Remember the ‘if it’s not on, it’s not on’ guy? Using condoms can greatly reduce the risk of getting an STI. But it’s important to remember they’re not foolproof.

If you don’t want to catch it, the advice is pretty simple. “Get tested early and often, and be your own advocate. When you go in for an STI test, ask to be tested for syphilis,” says Joe.

It’s also important to remember that, when possible, contact tracing is vital to stop any transmissible infection from turning into an outbreak. If you do get a positive test, make sure you tell all your partners in the past 3–6 months to get tested and treated for syphilis. If you are not comfortable telling your partner(s), ask your doctor to help you—or use an online contact tracing services like Let Them Know or The Drama Down Under.