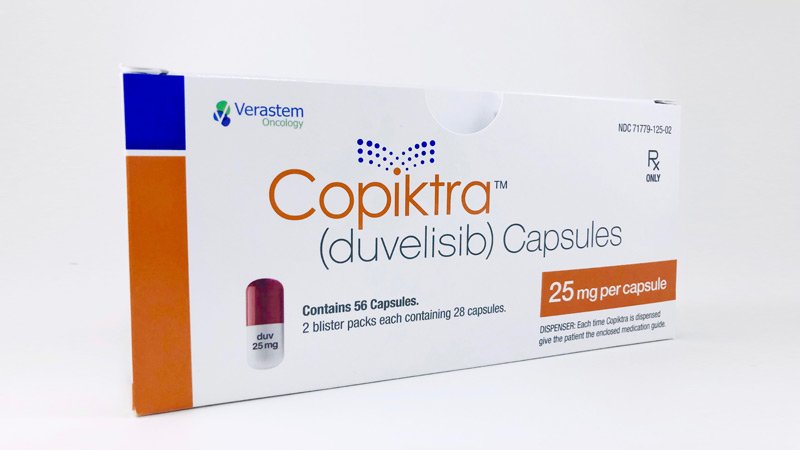 European Union approval has been recommended for duvelisib (Copiktra) for patients with relapsed/refractory chronic lymphocytic leukemia (CLL) or refractory follicular lymphoma (FL) who have received at least two prior lines of therapy.

The European Medicines Agency’s Committee for Medicinal Products for Human Use (CHMP) issued a positive opinion of the product; approval across the European Union usually follows.

Duvelisib is already on the market in the United States; it was approved in 2018 for the same two indications and also for use in the treatment of small lymphocytic lymphoma (CLL/SLL).

At the time of its US approval, Ian Flinn, MD, PhD, director of the Lymphoma Research Program at Sarah Cannon Research Institute, Nashville, Tennessee, said, “Duvelisib is an important addition to the evolving treatment paradigm for patients with CLL/SLL and FL.

“I believe [it] will address an unmet need for patients who have limited options once they have progressed after two prior therapies,” Flinn commented in a statement. He was lead investigator of the pivotal studies that led to the drug’s approval.

The FDA approval for use of duvelisib in refractory or relapsed CLL/SLL was based on results from a subset of patients who took part in the DYNAMO trial.

This trial compared duvelisib to ofatumumab (Arzerra) in 319 adult patients with CLL (n = 312) or SLL (n = 7) who had received at least one prior therapy.

The approval was based on a subset of these patients — those who had received at least two prior therapies — because “the benefit:risk appeared greater in this more heavily pretreated population compared to the overall trial population,” according to the manufacturer.

Efficacy was determined on the basis of progression-free survival (PFS), as assessed by an independent review committee. The median PFS was 16.4 months with develisib and 9.1 months with ofatumumab (hazard ratio, 0.40).

The accelerated approval for use for patients with previously treated FL was based on the single-arm, multicenter DYNAMO trial, conducted in 83 patients whose conditions were refractory to rituximab and to either chemotherapy or radioimmunotherapy.

This trial excluded patients with grade 3b FL, large-cell transformation, prior allogeneic transplant, and prior exposure to a PI3K inhibitor or to a Bruton’s tyrosine kinase inhibitor.

These patients had undergone a median of three prior lines of therapy (range, 1 – 10).

More recently, promising results for duvelisib for patients with relapsed/refractory peripheral T-cell lymphoma (PTCL) suggest that this could also be an indication for the drug in the future.

These results come from a phase 2 trial presented at the 2020 annual meeting of the American Society of Hematology. The overall response rate (ORR) was more than 60% among patients who received duvelisib 75 mg twice daily. The median duration of response exceeded 12 months.

In an ongoing dose-expansion phase, the ORR by investigator was 52% (13 of 25 patients), with a CR rate of 36% (9 of 25 patients), reported Barbara Pro, MD, of Northwestern University, Chicago, Illinois.

In comparison, most previously approved treatments for relapsed/refractory PTCL are associated with ORRs of less than 30%, low complete response rates, and median PFS of less than 4 months, she said.