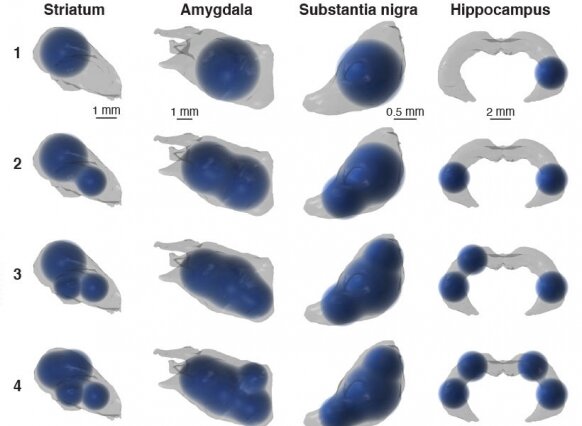 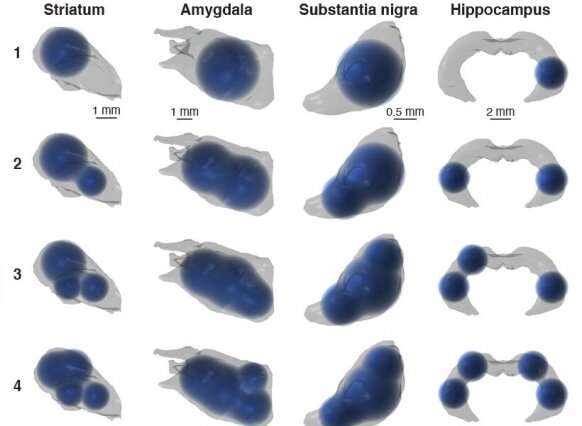 While we are starting to get a handle on drugs and therapeutics that might to help alleviate brain disorders, efficient delivery remains a roadblock to tackling these devastating diseases. New research from the Graybiel, Cima, and Langer labs at MIT now uses a computational approach, one that accounts for the irregular shape of the target brain region, to deliver drugs effectively and specifically.

“Identifying therapeutic molecules that can treat neural disorders is just the first step,” says MIT Institute Professor Ann Graybiel, the senior author of the paper. “There is still a formidable challenge when it comes to precisely delivering the therapeutic to the cells most affected in the disorder. Because the brain is so structurally complex, and subregions are irregular in shape, new delivery approaches are urgently needed.”

Brain disorders often arise from dysfunction in specific regions. Parkinson’s disease, for example, arises from loss of neurons in a specific forebrain region, the striatum. Targeting such structures is a major therapeutic goal, and demands both overcoming the blood-brain barrier while also being specific to the structures affected by the disorder.

Such targeted therapy can potentially be achieved using intracerebral catheters. While this is a more specific form of delivery compared to systemic administration of a drug through the bloodstream, many brain regions are irregular in shape. This means that delivery throughout a specific brain region using a single catheter, while also limiting the spread of a given drug beyond the targeted area, is difficult. Indeed, intracerebral delivery of promising therapeutics has not led to the desired long-term alleviation of disorders.

“Accurate delivery of drugs to reach these targets is really important to ensure optimal efficacy and avoid off-target adverse effects. Our new system, called COMMAND, determines how best to dose targets,” says Michael Cima, senior author on the study and the David H. Koch Professor of Engineering in the Department of Materials Science and Engineering and a member of MIT’s Koch Institute for Integrative Cancer Research.

In the case of Parkinson’s disease, implants are available that limit symptoms, but these are only effective in a subset of patients. There are, however, a number of promising potential therapeutic treatments, such as glial-derived neurotrophic factor administration, where long-term, precise delivery is needed to move the therapy forward.

“Many clinical trials are believed to have failed due to poor drug distribution following intracerebral injection,” explains Khalil Ramadi Ph.D. ’19, one of the lead researchers on the paper, and a postdoc at the Koch and McGovern institutes. “We rationalized that both research experiments and clinical therapies would benefit from computationally optimized infusion, to enable greater consistency across groups and studies, as well as more efficacious therapeutic delivery.”

The COMMAND system finds balance between the twin challenges of drug delivery by maximizing on-target and minimizing off-target delivery. COMMAND is essentially an algorithm that minimizes an error that reflects leakage beyond the bounds of a specific target area—in this case, the striatum. A second error is also minimized, and this encapsulates the need to target across this irregularly shaped brain region. The strategy to overcome this is to deliver multiple “boluses” to different areas of the striatum to target this region precisely, yet completely.

“COMMAND applies a simple principle when determining where to place the drug: Maximize the amount of drug falling within the target brain structure and minimize tissues exposed beyond the target region,” explains Ashvin Bashyam Ph.D. ’19, co-lead author and a former graduate student with Michael Cima at MIT. “This balance is specified based drug properties such as minimum effective therapeutic concentration, toxicity, and diffusivity within brain tissue.”

The number of drug sites applied is kept as low as possible, keeping surgery simple while still providing enough flexibility to cover the target region. In computational simulations, the researchers were able to deliver drugs to compact brain structures, such as the striatum and amygdala, but also broader and more irregular regions, such as the hippocampus.

To examine the spatiotemporal dynamics of actual delivery, the researchers used positron emission tomography (PET) and a “labeled” solution, Cu-64, that allowed them to image and follow an infused bolus after delivery with a microprobe. Using this system, the researchers successfully used PET to validate the accuracy of multi-bolus delivery to the rat striatum and its coverage as guided by COMMAND.