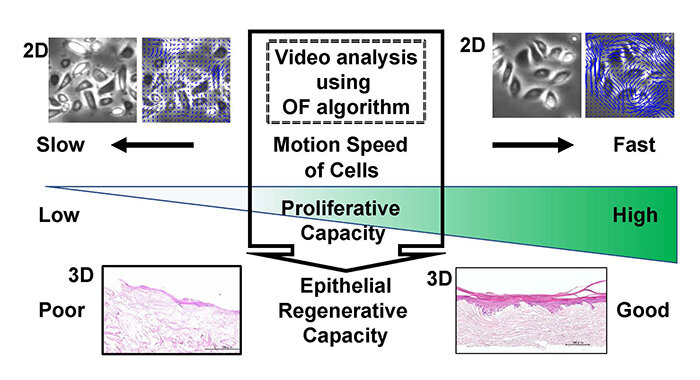 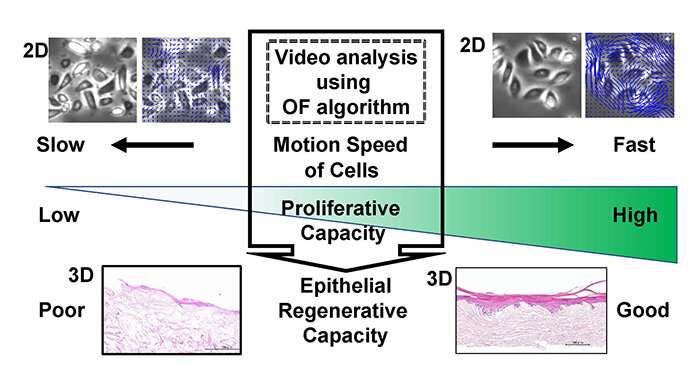 A comprehensive investigation on cells and colony motion offers new insight into the proliferative and epithelial regenerative capacities of human primary oral keratinocyte cultures with implications for quality control of engineered cells used in regenerative medicine. Dr. Kenji Izumi and his colleagues, Dr. Emi Hoshikawa and Dr. Taisuke Sato, modified the optical flow (OF) protocol originally presented in their 2019 paper to add the capacity to determine the threshold of the cells/colony motion speed required to differentiate substandard oral keratinocyte populations before manufacturing a tissue-engineered oral mucosa tissue construct.

Interdisciplinary collaboration was critical to the success of this study, with Dr. Izumi and Dr. Hoshikawa, both experts in the fields of oral keratinocyte biology, relying on the image analysis and mathematics expertise provided by Dr. Sato to enhance the protocol proceeding OF algorithm implementation. Oral mucosa keratinocytes are currently employed in regenerative dentistry and extra-oral regenerative medicine and distinguishing cellular health is critical for manufacturing high-quality products used in cell-based therapies.

While previous studies have noninvasively characterized the optimal metabolic activities of oral mucosa tissue-engineered grafts, the non-invasive measurements for first passaged (p1) oral keratinocytes have not developed yet as a tool for quality control of cells. The researchers first determined the specific spatio-temporal growth pattern of p1 cells, allowing them to set correlative estimates that reduced the time of microphotography from 24 hours to four hours, resulting in fewer image analyses. Cells/colony proliferation and motion speed of each frame was then assessed by applying the OF algorithm with image segmentation.

Dr. Izumi says, “Dynamic image-based analysis, rather than static image analysis such as observation of colony shape, allowed us to focus on cells/colony motion of oral keratinocytes in our cell culture system in which cells do not form densely-packed colonies.” Using this approach, the mean motion speed (MMS), a marker of locomotive ability, was evaluated. As expected, this analysis validated their prior finding that the MMS of oral keratinocytes is positively correlated with proliferative capacity.

Surprisingly, the team found this was not the only cellular characteristic associated with MMS, as histologic evaluation of cells showed epithelial regenerative potential is correlated with motion speed. The ability to assess both the proliferative capacity and epithelial regenerative capacity of mid-phase oral keratinocytes using the MMS threshold make this a more robust and predictive quality screening tool to ensure that the cells are suitable for clinical application.

Taking their investigation one step further, the researchers compared the growth characteristics of p1 oral keratinocytes exposed to metabolic challenge with those under standard conditions: “The creative point in this study was that we coerced cells in culture under a couple of poor conditions, which we called ‘challenged’ protocols, to debilitate cells,” said Dr. Izumi. “Then, we extrapolated the ‘threshold’ in our own culture condition.”

The proliferative potential of cells grown in differing conditions was compared, and the population doubling times were calculated to determine the MMS threshold indicative of cells suitable for transfer to 3D culture conditions. In their specific culture system, a motion index less than 40 μm/h reflected cellular damages induced by metabolic challenges and subpar cell colonies. However, these results have a wider application, with the motion index functioning as a threshold to determine the quality of cultured cells in different culture conditions.

Dr. Izumi says, “Depending on different type of cells, the details of the algorithm need to be considered and adjusted. More importantly, the ‘threshold’ is necessary to be determined by different type of cells, culture media, and culture conditions.” Given that the motion index is correlated with characteristics intimately connected to cell quality and clinical use, such as proliferation and epithelial regeneration, it can function as a reliable indicator of quality control.