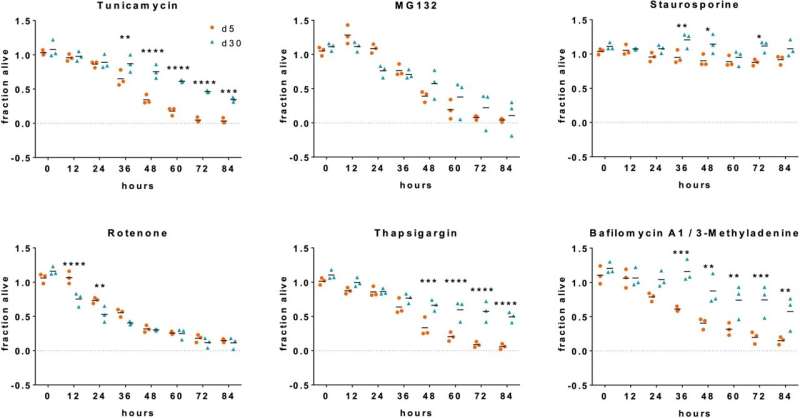 Essentially all human tissues and organs have the capacity to heal, to renew cells which are damaged or killed. In this context, the human brain behaves fundamentally differently. The vast majority of nerve cells are created before birth and the regenerative capacity of the postnatal human brain is limited to a few regions.

As a consequence, the average age of neurons in adults is much higher than that for any other cell type of the human body. But how do human neurons protect themselves from accidental cell death and maintain a high level of functionality throughout a human’s lifespan?

The team from the Hector Institute for Translational Brain Research (HITBR) at the Central Institute of Mental Health (CIMH) in Mannheim/Germany has now investigated cellular adaptations in human neurons which guarantee neuronal resilience. They used human induced pluripotent stem cells (iPS cells) to generate human neurons in the culture dish which they matured over time, generating a developmental model of the brain where they could directly compare young, newborn neurons to their older, more mature counterparts. The study has now been published in the journal Cell Death & Disease.

“If cells get stressed or harmed, they normally try to adopt to these conditions, by for instance activating reactive repair programs. At a certain degree of damage, a cell death program, called apoptosis, is activated to eliminate the harmed cell or tissue. This programmed cell death is controlled tightly by several molecular pathways,” explains Prof. Philipp Koch, lead author of the study and Head of the HITBR. “We found that the threshold for entering cell death is particularly high in human neurons.”

Complex and redundant preemptive strategies against stress and cell death

Indeed, the researchers in Mannheim showed that once human neurons mature they get endowed with complex and redundant preemptive strategies to protect against stress and cell death.

Among others, major components of the cell death machinery such as Caspases are strongly downregulated or shut off completely while protective pathways such as antiapoptotic Bcl-2 family proteins of inhibitors of apoptosis proteins (IAPs) are upregulated.