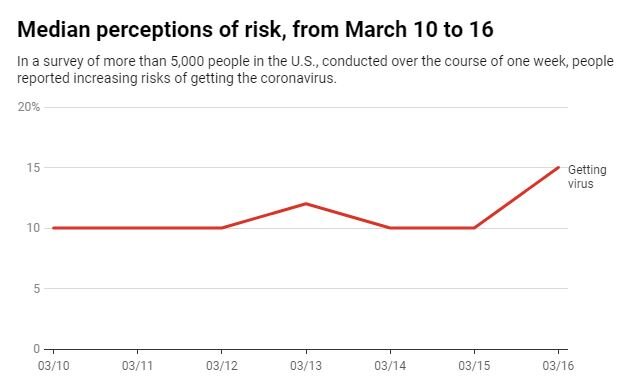 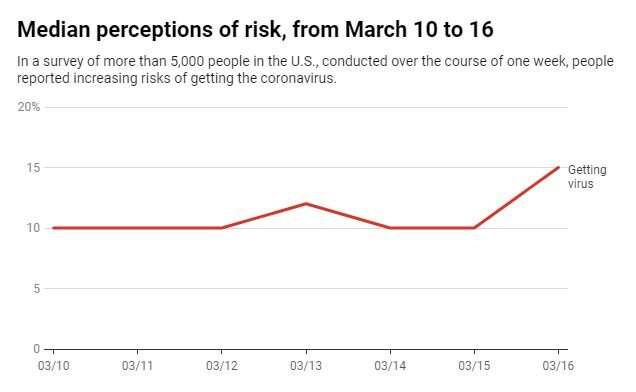 As the coronavirus began to spread in the United States, people faced an unknown risk and evolving health recommendations. Policy measures to curb the coronavirus epidemic have turned the world upside down, and the true impact of this global pandemic is yet to be seen.

Researchers are still learning more about the virus every day, but how do members of the general public perceive the risks associated with COVID-19? Do these beliefs affect what people have been doing to protect themselves? As social scientists, we’re interested in understanding how people’s beliefs and behaviors evolved in the face of this novel threat.

We launched a survey through the University of Southern California’s Understanding America Study to find out. Running from March 10 through March 16, the survey covered a period of time when the information available to the public and the situation on the ground were both rapidly changing. We were able to see how people’s perceptions of risk and their actions were changing from day to day.

As this crisis continues, it is important to understand what people think about the risks and how they are behaving. If, for example, people are seeing low risks and not implementing recommended actions, then public health communications may need to address that.

Do people in the US think they’ll get COVID-19?

Theories of health behavior suggest that people who think that a risk is higher are more likely to implement protective behaviors.

Because SARS-CoV-2 is a new virus, the risks are still not fully understood by experts, much less the general public. Perhaps as a result, most of our survey respondents initially believed that their chance of getting the coronavirus was relatively low. 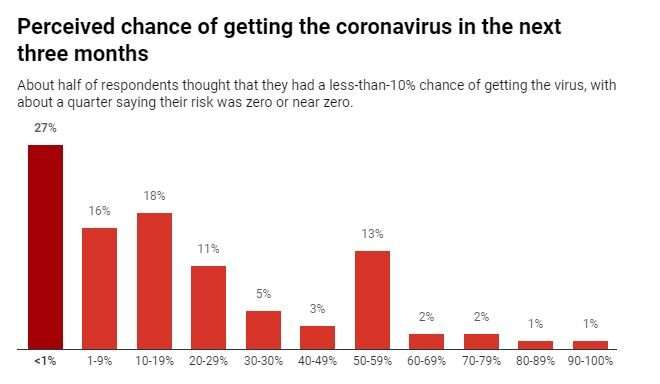 But over the course of our weeklong survey, reported coronavirus cases in the U.S. rose from 937 to 4,226. Additionally, halfway through our survey, the government imposed multiple travel bans, barring most travelers from Europe.

When we closed out the survey on March 16, the median prediction had gone up to 15%. The increase suggests that people were updating their beliefs as the virus started to spread across the United States day by day. They were perhaps starting to realize that they may be more vulnerable than they’d initially thought.

When we dug deeper into our survey data, we found that not everyone was convinced that they would be getting infected with the coronavirus. The distribution was skewed to the left, with its peak at the low end of the scale. Across all of our respondents, nearly a quarter thought they had a zero or near-zero chance of getting coronavirus in the next three months. Yet, a not-insignificant number of people thought they had a very high chance of getting it. Perhaps that explains why some people were still out partying over the weekend of March 14-15 while others stayed home and committed to social distancing.

Time will tell which of these risk perceptions is correct. However, it may be overly positive to think that the chances will be zero. Psychologists have suggested that people have a tendency to underestimate their personal risks of experiencing negative events to help cope with an uncertain and scary world. This idea that “it can’t happen to me” is called unrealistic optimism and could explain the large number of people who think they face almost no risk getting the coronavirus.

This group worried us. Because risk perceptions tend to inform behaviors, people who see low risks of getting sick may not feel the need to follow recommended health behaviors like hand-washing and social distancing. Unexpectedly, this is not what we found. 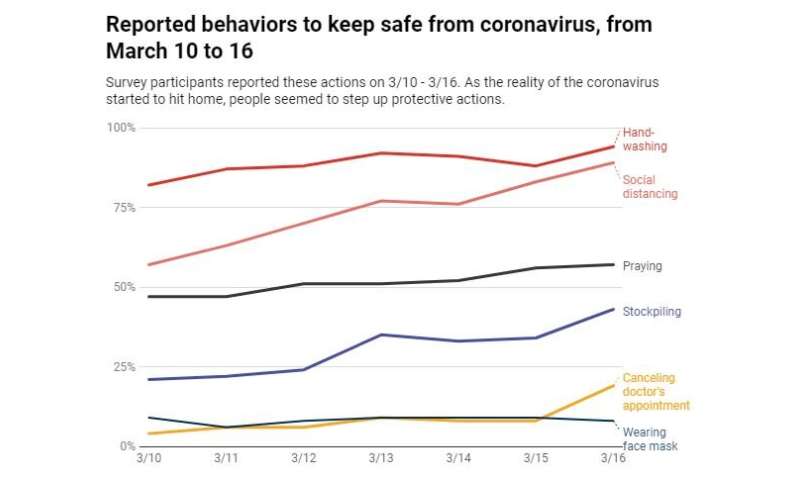 What are people doing?

In our survey, we asked people whether they had engaged in behaviors to keep safe from the coronavirus, like hand-washing, canceling travel or social distancing. And to our surprise, most people said that they had already started doing these things—even if they saw relatively low chances of getting sick. By the end of the week, on March 16, nearly 89% of respondents said they were practicing social distancing, 32% higher than on the first day of the survey.

So why this seeming contradiction between belief and behavior? We think one reason could be that people felt safer as a result of implementing those actions. Doing something may have given them a feeling of control and a sense of security.

Another reason for stepping up protective actions could be that people wanted to respond to the messages to “flatten the curve” and to protect others—especially those who are older or have underlying health conditions.

Even in regular flu seasons, some people may be motivated to take protective actions to help others. Such altruistic motives may make people feel good about themselves, while also supporting the optimistic view that they themselves were not at risk. Engaging in those actions together with others in the community may also have further contributed to this positive outlook.