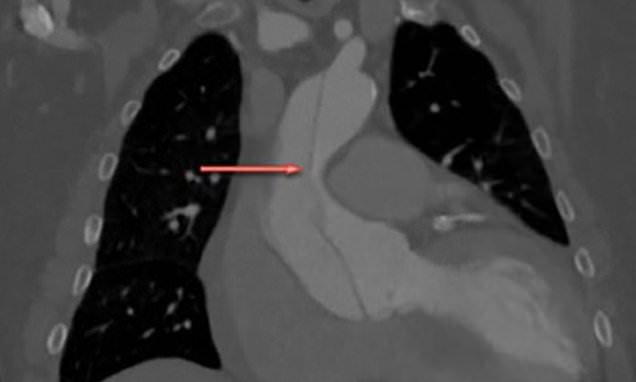 EXCLUSIVE: A hoarse throat can be the sign of a deadly heart condition: US doctors find American man’s damaged artery was squashing his voice box

US doctors are warning a hoarse throat could be the sign of a deadly heart condition.

They made the plea after treating a 68-year-old American man whose voice box was distorted by a damaged artery pressing against it.

The unidentified patient went to hospital complaining of a raspy voice and sore throat which had lasted three months.

But scans revealed a tear in his main artery, close to his heart, which can be life-threatening.

He was diagnosed with chronic aortic dissection condition — a rip in the inner layer of the aorta which is discovered more than two weeks after it occurred.

Blood rushes through the tear, causing the inner and middle layers of the aorta to split or dissect. If they hadn’t spotted it, he could have died.

Doctors from the MetroHealth Center in Cleveland and others in the US detailed the tale in the SAGE Open Medical Case Reports.

Writing in the report, they said: ‘The presented case illustrates the importance of including aortic dissection in the differential for a patient presenting with hoarseness.’ 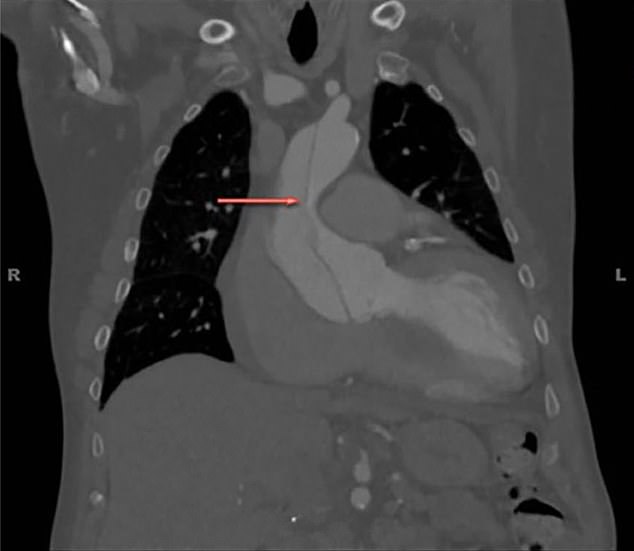 An enhanced scan of between the 68-year-old man’s neck and abdomen revealed the tear in the artery wall, shown by the arrow 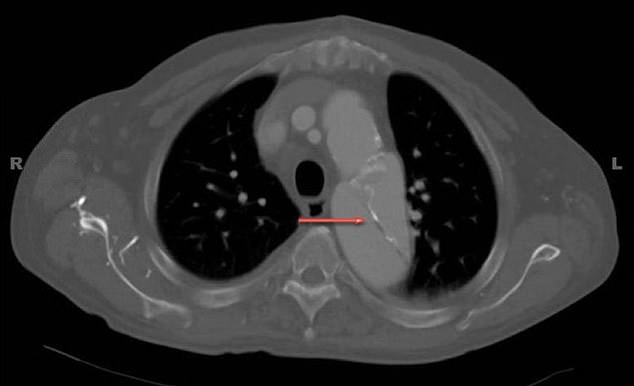 This vertical scan of between the man’s neck and abdomen showed the swelling of the aorta to 2 inches (5.2 cm). This was squashing the man’s voice box, causing his throat to go hoarse

Aortic dissection is a life-threatening emergency.

It occurs due to a tear in the inner layer of the aorta. Blood rushes through the tear, causing the inner and middle layers of the aorta to split or dissect.

It can happen spontaneously or as a result of damage caused by necessary medical or surgical treatment.

Roughly 10 per cent of aortic dissections are painless and have signs and symptoms that are indirectly caused by the dissection.

Around 20-30 per cent of these patients have neurological complications, with stroke being the most common.

Because some cases are pain-free, they can take weeks or even years to diagnose.

Cocaine use, hypertension and previous heart or aortic surgery can all contribute to aortic dissection.

The man had a long history of illnesses, including end-stage renal disease, heart failure and irregular heartbeat.

An ear, nose and throat specialist examined his voice box using a small, flexible telescope passed through the nose, which revealed that his left vocal cord was paralyzed.

A scan of his neck showed his aorta had swollen to an abnormal size.

The expansion of the aorta had squashed the man’s recurrent laryngeal nerve, which controls the vocal cord muscles, leading to hoarseness.

The very rare loss of voice as part of aortic dissection is known as Ortner’s syndrome, or cardiovocal syndrome.

He was rushed into surgery to have the artery repaired, but his hospital stay was complicated by a bleed in the small intestine due to an ulcer, which needed a transfusion.

After 20 days in hospital, he was discharged and given physical therapy, which gradually reduced the hoarseness of his voice.

Over 13,000 people die from an aortic dissection annually in the US.

If the symptoms of aortic occur within the past two weeks, the dissection is called acute aortic dissection.

If they began more than 14 days ago, as in the case of the American man, it is called chronic aortic dissection.