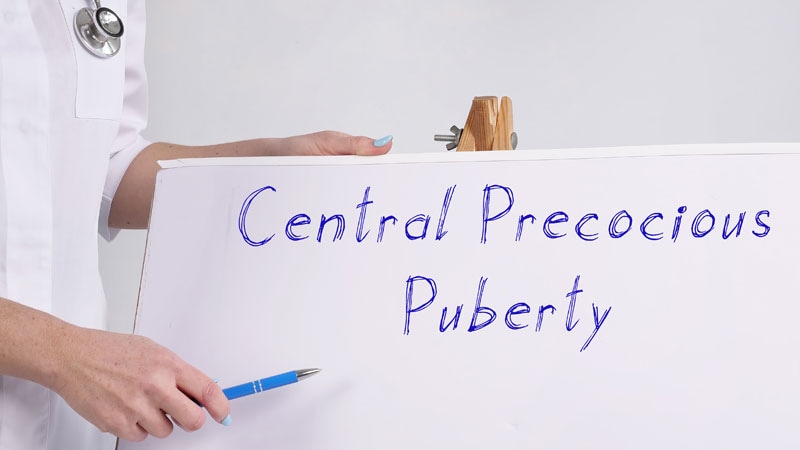 The product was approved by the US Food and Drug Administration on May 4 for the treatment of pediatric patients 2 years of age and older with central precocious puberty.

In central precocious puberty, which is gonadotropin-dependent, early maturation of the entire hypothalamic-pituitary-gonadal (HPG) axis occurs, with the full spectrum of physical and hormonal changes of puberty.

Leuprolide acetate is thought to offer dosing advantages over other currently available treatments in the United States for central precocious puberty, which must be given intramuscularly and more frequently, or be implanted.

“We know that subcutaneous injections would be highly beneficial as there may be less local tissue trauma and they may be a little bit more acceptable form of administration, especially for younger children with central precocious puberty,” Benson said.

“Prior to This, Treating Precocious Puberty Was Always a Challenge”

Asked to comment, session moderator Jad G. Sfeir, MD, of the Mayo Clinic, Rochester, Minnesota, told Medscape Medical News: “Prior to this, treating precocious puberty was always a challenge…This is a major change, as the treatments can be spaced out and still show good benefit based on this study.”

However, Sfeir did note that about a third of the patients reported injection site pain despite a majority receiving lidocaine with the injection.

“You’re giving an injection to a child. You want to make sure they’re okay, both psychologically and physically…We don’t know how long or how bad the pain was, but [it] didn’t lead to treatment discontinuation or withdrawal from the study, which makes you think it probably wasn’t substantial.”

Sfeir also noted that administration is tricky because the product has to be mixed together. It comes in two separate syringes, one containing the leuprolide acetate powder, and the other a viscous polymeric gel delivery system. The contents of the two syringes are mixed for 45 seconds to create a uniform suspension, which is then injected into the child’s abdomen with a 5/8-inch, 18-guage safety needle. The injection must be given within 30 minutes of reconstitution.

Benson said that occasionally a family member is taught how to administer the injections, particularly if one is a nurse or the patient lives far from the clinic, but that in most cases the patients come to the clinic and nurses there give the injections.

The study presented by Benson involved 60 girls aged 2-8 years and two boys aged 2-9 years with central precocious puberty, all naive to treatment. A total of 59 children received both doses of 45 mg subcutaneous leuprolide acetate 24 weeks apart. The overall mean age was 7.5 years, 52% were White, and 24% were Black.

The bone age ratio, defined as bone age divided by chronological age at the time of bone age measurement, was 1.39 at baseline, dropping to 1.34 by week 24, and 1.32 at week 48. The difference between week 48 and baseline was significant, Benson said.

Mean BMI remained mostly stable throughout the study, increasing slightly from 18.6 kg/m2 at baseline to 19.1 kg/m2 at week 24 but remained essentially unchanged, at 19.7 kg/m2, by week 48.

That difference, of about 2.8 cm (1.1 in), was statistically significant, Benson said.

Some of the data Benson presented were also published online August 1, 2020 in the Journal of Clinical Endocrinology and Metabolism. The lead author of that study was pediatric endocrinologist Karen O. Klein, MD, of Rady Children’s Hospital and University of California, San Diego.

They reported that external genitalia development also regressed in both boys, and 88% of the girls and one of the two boys maintained peak poststimulation luteinizing hormone levels below 4 IU/L at week 48.

Adverse events related to treatment were reported in a third (34%) of the children. The most common side effect reported during treatment was injection site pain in 31%, despite lidocaine being used in about 82%.

Other adverse events that occurred in more than 10% of the participants included nasopharyngitis in 22%, pyrexia in 17%, headache in 16%, and cough in 12.5%.

There were no serious adverse events related to the drug, and no withdrawals or discontinuations resulting from any adverse events.

Sfeir cautioned that, as with most new drug formulations, cost is often a problem initially. “Sometimes newer products aren’t preferred by payers. This is always a struggle. We’ll see in practice what the impact will be.”

But Benson said, “It’s coming online with some of the insurance companies. Yes, there definitely is coverage.”

Miriam E. Tucker is a freelance journalist based in the Washington, DC, area. She is a regular contributor to Medscape, with other work appearing in The Washington Post, NPR’s Shots blog, and Diabetes Forecast magazine. She is on Twitter: @MiriamETucker.