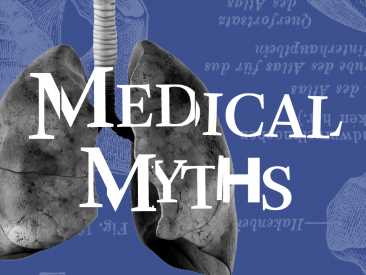 March 24 is World Tuberculosis Day, so in today’s edition of our Medical Myths series, we will focus on some of the misunderstandings associated with tuberculosis (TB). We cover the role of genetics, treatment, transmission, and more.

TB is a bacterial infection. It primarily affects the lungs, but it can also impact other parts of the body.

Symptoms include a chronic cough with bloody mucus, fever, and night sweats. Another common symptom is weight loss, which is why people used to call TB “consumption.”

The bacteria that cause TB, called , spread from one individual to another through droplets expelled during coughing or sneezing. After transmission, the disease can progress in different ways, depending on the response of the host immune system.

TB has affected humans for thousands of years, and it is still one of the world’s deadliest communicable diseases. Each day, around die from it.

According to the World Health Organization (WHO), TB was responsible for global deaths in 2019.

The WHO estimate that the global incidence of TB dropped by around 2% each year from 2015 to 2019. However, with a worrying rise in multidrug resistant TB, there is still a long way to go before scientists can eradicate this curable and preventable disease.

An estimated 1 in 4 people worldwide have a TB infection. However, only 5–15% of people with an infection will develop symptoms in their lifetime. When someone has an infection but does not experience symptoms, they have a .

Today, there is still a attached to TB. By addressing some of the myths associated with TB, we might help slowly strip this stigma away.

1. Everyone with TB is infectious

This is untrue. Someone with TB can only transmit the infection if they develop symptoms. This means that someone with a latent infection cannot transmit TB.

Generally, people with TB stop being infectious around after starting treatment.

Although people used to believe that TB passed from parent to child, this is a myth.

This misconception may have arisen because people living in the same household often developed the disease. We now know that this is because their close proximity made it easier for the bacteria to spread from person to person.

However, there does appear to be a to TB. However, rather than a gene being responsible for causing TB, it appears that some genes might influence whether or not someone will transition from a latent infection to an active infection.

This is false; TB is treatable. The most common treatment for a latent TB infection is the antibiotic isoniazid. People with TB should take this drug as a single daily pill for 6–9 months.

For individuals with an active infection, doctors tend to prescribe a combination of antibacterial medications for 6–12 months. A common combination is isoniazid with rifampin, pyrazinamide, and ethambutol.

According to the Centers for Disease Control and Prevention (CDC), the Food and Drug Administration (FDA) have approved to treat TB.

People who have multidrug resistant TB may need to take at least to fight off the infection.

This is a myth; TB can affect people anywhere in the world. However, there are certain regions wherein TB is more prevalent.

According to the WHO, in 2019, of new TB cases occurred in South East Asia. Eight countries account for two-thirds of new cases: India, Indonesia, China, the Philippines, Pakistan, Nigeria, Bangladesh, and South Africa.

TB is a serious illness, so people are understandably concerned about how it can spread. This has given rise to some myths.

TB can only spread when someone with an active infection in their lungs or throat coughs, sneezes, speaks, or sings.

This is not true. TB can be fatal without treatment, but with modern medicine, doctors can successfully treat the illness.

On March 24, 1882, Dr. Robert Koch that he had discovered the bacteria responsible for causing TB. This discovery paved the way toward diagnosing and curing this illness. Almost 140 years on, the fight continues.