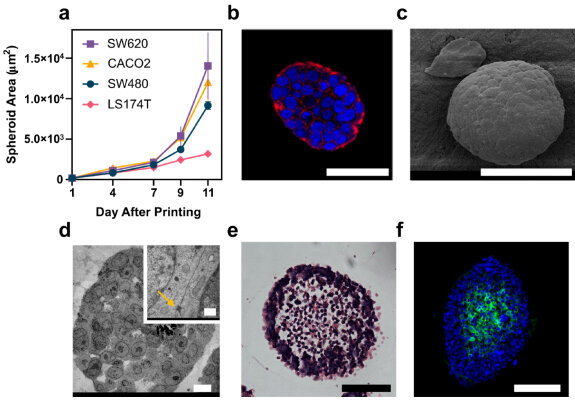 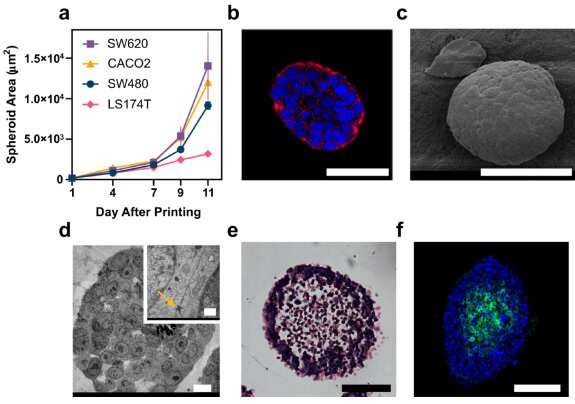 Bowel cancer patients could in the future benefit from a new 3D bioprinting technology which would use their own cells to replicate the complex cellular environment of solid tumors in 3D models. The University of Bristol-led advance, published in Biofabrication, would allow clinicians to treat the models, known as spheroids, with chemotherapy drugs and radiation to help them understand an individual patient’s resistance to therapies.

Bowel cancer is the third-most prevalent cancer worldwide, a major cause of cancer-related deaths and is becoming more prevalent globally each year. While current therapies aim to shrink tumors through a combination of surgery, chemotherapy and/or radiotherapy, the heterogenous nature of bowel tumors mean that chemotherapy drugs have variable effects between patients.

In this new study, researchers developed a new 3D bioprinting platform with high content light microscopy imaging and processing. Using a mixture of bioinks and colorectal cancer cells, the team show they were able to replicate tumors in 3D spheroids.

To investigate how the tumors might respond to drugs, dose-response profiles were generated from the spheroids which had been treated separately with chemotherapy drugs oxaliplatin (OX), fluorouracil (5FU), and radiotherapy. The spheroids were then imaged over time. Results from their experiment showed oxaliplatin was significantly less effective against tumor spheroids than in current 2D monolayer culture structures, when compared to fluorouracil.

Professor Adam Perriman, Professor of Bioengineering from Bristol’s School of Cellular and Molecular Medicine, and founder of the cell therapy company CytoSeek, and the study’s lead author, explains the technology’s significance: “Clinically predictive models which allow clinicians to identify how well tumors respond to drugs before they are administered in patients, are still an unmet need. Two-dimensional (2D) cell monolayer culture remains the standard for modeling in vitro drug effectiveness and safety. However, its poor in vivo predictive capability inhibits its use as a tool for drug discovery, drug repositioning and personalized medicine.”

“We have developed a high-throughput bioprinted bowel cancer spheroid platform with high levels of automation, information content, and low cell number requirement that mimics the 3D characteristics of tumors, and show that some tumors are more resistant to chemotherapy.”

“We anticipate that this new platform technology could have significant impact in human disease modeling for evaluation of oncology drug-response in 3D. This is a big step towards personalized medicine and helping to understand why certain patients respond to chemotherapy.”