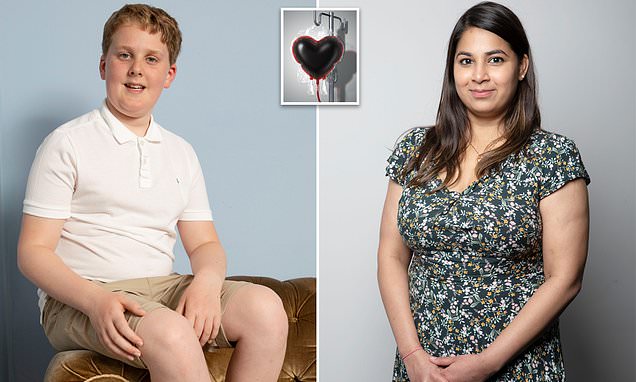 Why giving blood could help save cancer patients: Transfusions aren’t just for emergencies – in fact, most donated blood is used to help patients with ongoing illness. But worryingly, stocks are at an all-time low 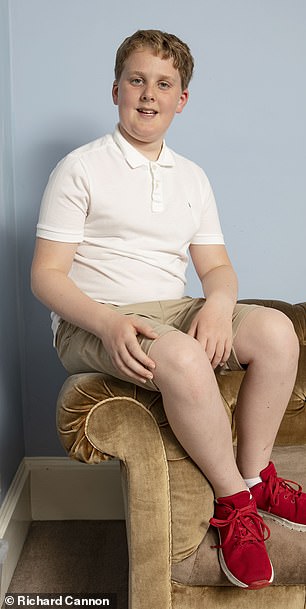 Andrew Berthoud is now a sporty, cricket-loving 12-year-old — but without his 22 blood transfusions, he wouldn’t be here, says his mother, Melody.

This wasn’t because he’d had an accident or undergone surgery — Andrew needed the life-saving transfusions because he had cancer.

Andrew was three when his concerned GP urged Melody to go straight to hospital after she’d taken the pale and lethargic toddler to get a blister-like spot on his tummy checked out.

Melody, 44, a headteacher who lives in South London with husband Joseph, 45, an engineer, and daughter Clara, 14, had suspected Andrew had chickenpox.

But tests revealed it was acute lymphoblastic leukaemia (ALL), a cancer affecting the white blood cells responsible for fighting disease.

‘I now know that Andrew’s symptoms — paleness, lethargy, sweatiness and nosebleeds — were all classic signs,’ says Melody of Andrew’s cancer diagnosis in 2012.

‘We were devastated, but the consultant reassured us that the cancer was curable with treatment.’

Three-and-a-half long years of chemotherapy lay ahead. Andrew also needed regular transfusions as the cancer itself interfered with the normal production of blood cells in his bone marrow, while the chemotherapy destroyed blood cells.

The red blood cells he was given were urgently needed to boost the oxygen supply to his organs and the platelets helped his blood to clot.

By the time Andrew finished his treatment in February 2016, he’d had 22 pint-sized bags of blood from 22 donors.

He’s just had the five-year all-clear from cancer and, says Melody: ‘You wouldn’t know to look at him that he has ever been ill.’

While chemotherapy and radiotherapy are vital to treat the cancer itself, a blood transfusion can literally be life saving. And every year in the UK, tens of thousands of people with cancer will, like Andrew, need a transfusion.

These include almost all patients with blood cancers, specifically leukaemia, and other cancers such as those affecting the digestive system, and long-term cancer. 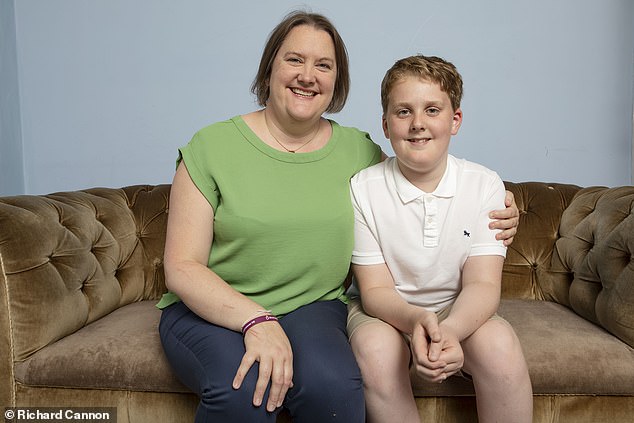 While chemotherapy and radiotherapy are vital to treat the cancer itself, a blood transfusion can literally be life saving. And every year in the UK, tens of thousands of people with cancer will, like Andrew, need a transfusion

Regular transfusions are also needed by thousands with blood disorders such as sickle-cell disease — where the red blood cells turn into a sickle shape and don’t carry oxygen as effectively — and thalassaemia, where people produce little or no haemoglobin, the protein that helps transport oxygen around the body.

In fact, two-thirds of donated blood is used for these kinds of patients, and just a third for emergency treatments and surgery — yet as a new UK poll reveals, many donors are not aware that most of the blood they give is needed by patients such as Andrew, whose daily lives depend on it.

And worryingly, the same Opinium poll revealed that three out of five existing donors or those willing to give blood have not donated at all during the past year.

‘This drop reflects the enormous anxieties that most people had with regards to going out and visiting medical premises for fear of infection from coronavirus,’ says Dr Farrukh Shah, a consultant haematologist at Whittington Hospital in London.

Now that the NHS has resumed elective surgery and treatments and is starting to tackle the backlog of procedures cancelled due to the pandemic, there is a pressing need for ‘existing and new donors to register and give blood so that these patients have the supplies they so badly need’, says Dr Shah (who’s just been appointed medical director for transfusion at NHS Blood and Transplant, or NHSBT). 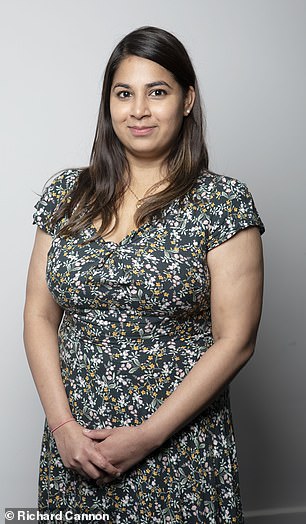 ‘There is a general mistrust of some institutions based on issues of historic racial discrimination, and this can include the NHS,’ says Roanna Maharaj, a spokesman for the charity UK Thalassaemia Society, herself a thalassaemia patient of mixed Indian-Caribbean heritage

Donated blood is usually separated into its individual components so a patient can be given the element they need: red blood cells, which are vital for transporting oxygen around the body, platelets, and plasma, the straw-coloured liquid part of the blood that contains antibodies.

There are four main blood groups (A, B, O and AB), and numerous minor groups — and a poorly matched transfusion will trigger a serious reaction which can lead to severe life-threatening anaemia.

People who undergo regular blood transfusions are more likely to develop an immune response to infused blood due to differences in minor blood groups — especially if the blood is not a good match to their ethnic background.

The NHS regularly appeals for new donors to replace those who can no longer donate (an estimated 135,000 new donors are needed each year — for instance, you can’t continue donating after the age of 72), and there is currently an urgent need for donors from black and ethnic minority communities.

‘Around 90 per cent of the blood donated comes from people of white, Caucasian backgrounds.

‘Yet a substantial amount of the blood stock is actually needed to save the lives of those with sickle-cell disease, which largely affects black people, and thalassaemia which predominantly affects those of Mediterranean or Asian heritage, so we are specifically reaching out to people in those communities to give blood.’

Sickle cell and thalassaemia are both believed to have arisen from a mutation in the genes of people living in malaria-infested areas. The red blood cells evolved to resist penetration by the malaria parasite, but this mutation also made those in these areas prone to the two blood disorders or to carrying the gene responsible.

Yet campaigners acknowledge there are multiple reasons why people from black and ethnic minority backgrounds may not want to donate blood.

‘There is a general mistrust of some institutions based on issues of historic racial discrimination, and this can include the NHS,’ says Roanna Maharaj, a spokesman for the charity UK Thalassaemia Society, herself a thalassaemia patient of mixed Indian-Caribbean heritage.

‘But mostly there’s a real lack of awareness among black and ethnic minority groups about the fact their blood is specifically needed to save the lives of members of their own communities,’ she says.

NHSBT has identified a need for 16,000 new donors from black and ethnic minority groups this year to meet demand from sickle-cell patients who need transfusions — 99 per cent are from African and Afro-Caribbean groups.

The main symptoms are anaemia and episodes of severe pain due to poor oxygen supply to vital organs, and there is also a risk of blockages in the small blood vessels because the red blood cells can stick together, raising the risk of complications including leg ulcers, stroke and blindness.

Over time, organs can become damaged and the condition can be fatal. An estimated 1,200 people with sickle cell need regular blood transfusions, with 3,000 more requiring occasional transfusions each year.

However, there was an acute drop in new black donors in 2020 as a result of the pandemic.

Just how vital it is to match donors to patients’ blood types is illustrated in Roanna Maharaj’s shocking experience.

Now 32, she was diagnosed with the condition as a baby and depends on regular transfusions of red blood cells to lead a normal life.

In January 2011, soon after a transfusion, she developed a rash, high fever and shaking.

‘It was clear that this was being caused by a reaction to the blood transfusions because it came on within 15 minutes,’ says Roanna.

In fact, Roanna had suffered allo-immunisation, a side-effect that happens when the body produces antibodies in response to infused blood that doesn’t fully match.

It’s more common in patients who receive regular transfusions because their immune systems can become more sensitive to donor blood.

Within eight months, Roanna went from being a carefree, sporty student who’d just started a PhD in health psychology at Leicester University, to being bedridden and in debilitating pain.

Her skin was so sensitive that she couldn’t bear anything to touch it. She was prescribed huge amounts of antihistamines and steroids in an attempt to control her reactions, causing her to put on 20kg in weight.

‘I was exhausted and needed a Zimmer frame to walk,’ says Roanna, who lives in Wood Green, North London.

As a result of her reaction, any blood Roanna received afterwards needed to be ‘washed’ and treated with radiation to kill off white blood cells (which contain traces of the donor’s DNA) to minimise the chances of further reactions.

She was virtually housebound for nearly a decade, but thanks to painstakingly matched donations, blood ‘washing’ and medications, her health has improved and she’s hoping to resume her studies in September.

‘Without blood transfusions, I’d not be alive today,’ she says. ‘But the past decade has also made me so keenly aware of the importance of donors from black and ethnic minority backgrounds.

‘Every person who donates can make a bigger difference than they may ever realise.’