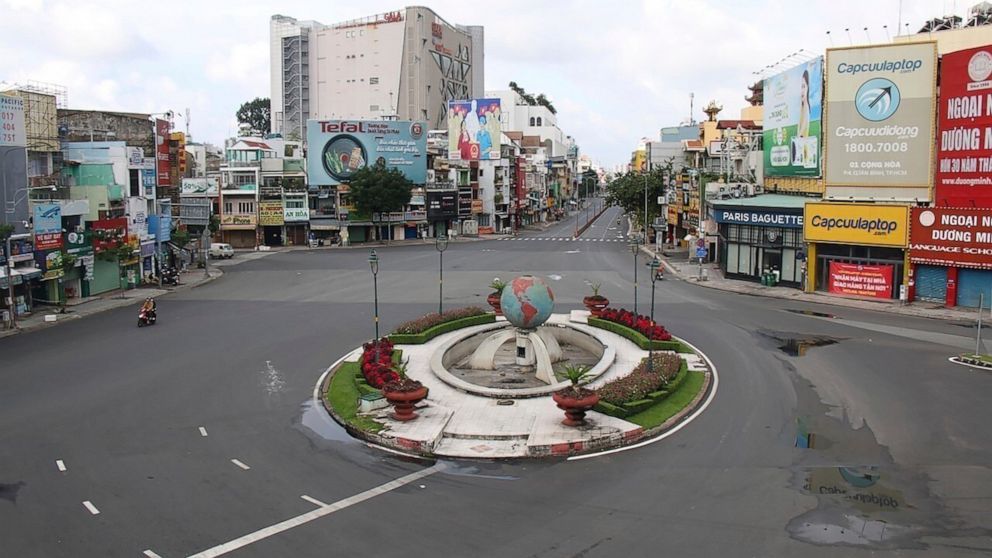 HANOI, Vietnam — Vietnam’s largest metropolis, Ho Chi Minh City, went into a tightened lockdown Monday to battle its worst outbreak of the coronavirus pandemic, just a day ahead of the arrival of U.S. Vice President Kamala Harris on a state visit.

The city has mobilized police and army troops to enforce the lockdown and to deliver food as well as necessities to each household, city authorities announced. Under the stricter measures imposed for at least two weeks, people in “high risk” districts are not allowed to leave their homes.

On Sunday evening, just hours before the intensified lockdown went into effect, the ministry reported 737 virus deaths, its highest single-day total, increasing the death toll since the pandemic began to 8,277, most in the southern region.

Her visit will be to the capital, Hanoi, which is more than 1,100 kilometers (700 miles) north of Ho Chi Minh City but is also under lockdown.

Vietnam managed to keep the infection rate relatively low up until April this year, with only 35 deaths. Last year it was praised for keeping the virus under control, an accomplishment generally attributed to the discipline of being a single-party communist state with tight controls at all levels.

But with the spread of the delta variant of the virus, the country is experiencing its worst outbreak by far, with more than half of the country’s 98 million population under lockdown orders.

The visit by Harris to boost bilateral relations is sure to spotlight the aid Washington has been able to offer Vietnam during the health crisis.

The U.S. has been Vietnam’s largest donor of vaccines, sending 5 million doses of Moderna. Separately, Vietnam has signed commercial agreements with American vaccine makers Moderna and Pfizer to secure at least 80 million doses of vaccine toward its effort to inoculate 70% of the population with at least one shot by the first quarter of next year.

Since the latest wave began at the end of April, Vietnam has reported 344,000 confirmed cases, with Ho Chi Minh City and neighboring Binh Duong province accounting for most of the new infections.

By asking people to “stay put” and “stay in,” authorities expect to flatten the current surge of cases.

Ho Chi Minh City and the entire southern region of Vietnam had already been in lockdown since July when the delta variant started to spread rapidly. Public gatherings were banned, non-essential businesses closed and people were asked to leave their homes only to buy food or for urgent matters.

It is hoped the new severe restrictions in Ho Chi Minh City will bring down the infection rate among its 10 million residents and ease the pressure on its overloaded hospitals.

Since June, the city has set up over a dozen temporary hospitals to treat COVID-19 patients, but the high number of active cases means thousands of other patients are still not able to be hospitalized.

According to the Health Ministry, some 19,000 virus patients with mild symptoms have been asked to stay home and get medical assistance from teams of mobile doctors in their communities.

According to the U.S. Agency for International Development, USAID, the country has pledged over $20 million dollars in virus-related assistance to Vietnam.

Harris is scheduled to attend the inauguration in Hanoi of an office of the U.S. Centers for Disease Control and Prevention, better known as the C.D.C. It will also serve as the C.D.C.’s regional office for Southeast Asia to deal with issues involving infectious diseases.