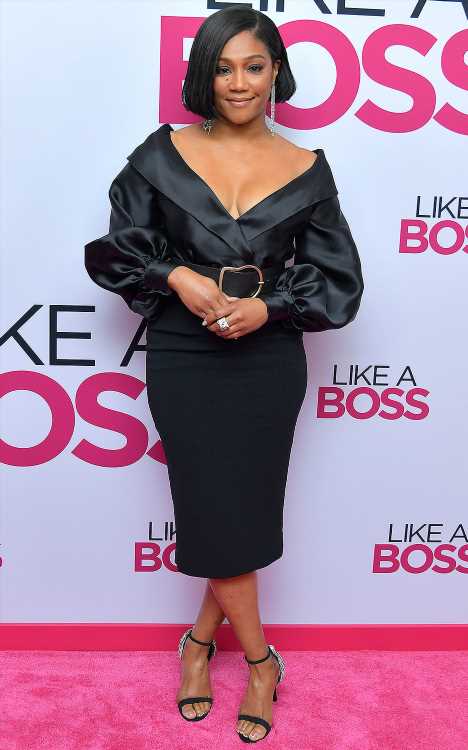 Tiffany Haddish is in the middle of a body transformation — and she's loving the results so far.

The Like a Boss star, 41, kicked off the 30 Day Transformation Team program on Nov. 27, documenting her progress on Instagram.

While Haddish lost 40 lbs. during the pandemic, three weeks into her new program, she has shed an additional 10 lbs.

Now, she tells PEOPLE, it's time to focus on gains.

"I'm very skinny, it's going good," she says of her progress. "I don't really want to lose any more weight. I want to now just sculpt it all, sculpt off the fat so I can get to the muscle. The goal is to have abs by New Year's Day! We'll see."

Along with consistent exercising, the new routine has meant major changes to Haddish's diet — she told PEOPLE earlier this month that "nutrition is everything" and she's been "eating directly out of my garden."

She adds that she modified her 30-day transformation plan to be vegan, like her boyfriend Common. Maintaining the food requirements, Haddish says, has been "super hard."

"They gave me this whole vegan menu, meals and stuff, and so I'm cooking for myself. For a gift, [Common] got me a chef to make me these juices, and to make the food in alignment with the program."

"I figured if I'm going to do a transformation, I'm going to challenge myself all the way around," says Haddish, who is gearing up to release new content with Bumble ahead of Dating Sunday — the first Sunday after New Year's Eve, which is known as the busiest online dating day of the year.

"But let me tell you something: I miss the meat," she continues. "I want some brisket!"

Once her month-long program ends, Haddish says she'll adopt some of what she's learned into her everyday routine. But she probably won't ditch meat for good. "I think I'm going to definitely go back to eating meat, but I'm going to probably be a rationing it out," says Haddish. "I'm not going to lie to you — two days ago I tried to eat some turkey bacon because I was just smelling it and I'm here on set. I tried it and it was so nasty I tossed it out. I didn't even swallow. I'm hoping that I didn't lose my taste for meat. But I might have."

The Black Mitzvah comedian explains that her gift to herself this holiday season is also related to her transformation journey: an MRI.