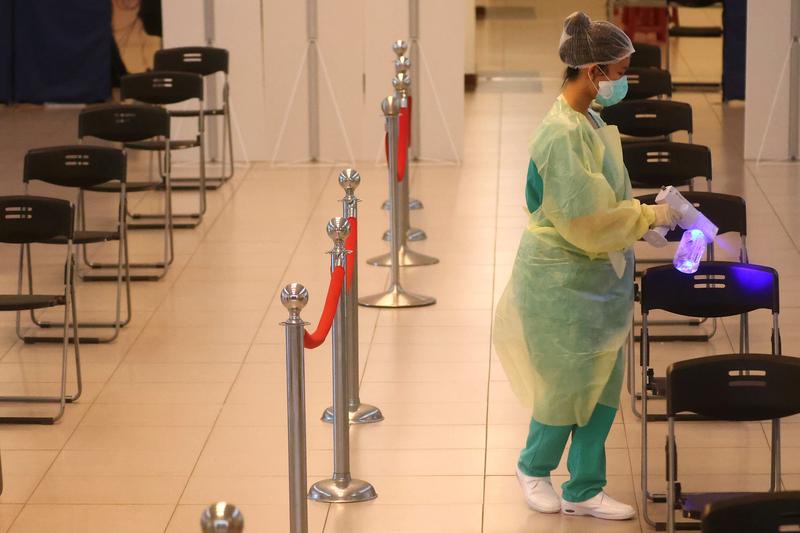 TAIPEI (Reuters) -Taiwan has rejected an application for the emergency use of UBI Pharma’s COVID-19 vaccine candidate, the government said on Monday, though the president said she would get a separate domestic shot in a show of support for the scheme.

A medical worker disinfects the chairs after people received a dose of the AstraZeneca vaccine against the coronavirus disease (COVID-19) during a vaccination session for elderly people over 75 years old, at a stadium in New Taipei City, Taiwan June 25, 2021. REUTERS/Ann Wang

Although Taiwan has ordered millions of Moderna and AstraZeneca shots, developing a local vaccine has been a major goal and it is due next week to start administering its first domestic vaccine, made by Medigen Vaccine Biologics.

The health ministry, explaining the rejection of the request for emergency use authorisation (EUA), said the antibodies triggered by UBI’s candidate did not match up with those of the AstraZeneca vaccine.

Health Minister Chen Shih-chung expressed regret that the EUA had not been granted. “We still have to follow certain standards,” he told reporters.

UBI, whose share price closed 30% down on Monday following the rejection, said in a statement to the stock market it saw a limited financial hit from the decision and that it would re-evaluate the “benefit assessment” of the phase three clinical trial. It did not elaborate.

In June, the company had said it would seek an EUA in Taiwan and that Phase II tests showed no major adverse effects for its candidate, which, it said, generated a good immune response.

The government has drawn criticism from opposition parties after President Tsai Ing-wen initially pledged to start administering domestically developed vaccines in July, before results of second clinical trials were released.

Writing on her Facebook page, Tsai said she would be getting her first shot of Medigen’s vaccine next Monday.

About 40% of Taiwan’s 23.5 million people have received at least one dose of the two required by the vaccine regimen.

Unlike some other parts of Asia, Taiwan faces no huge pressure to accelerate its vaccination drive, as it is recording only a handful of domestic infections a day.