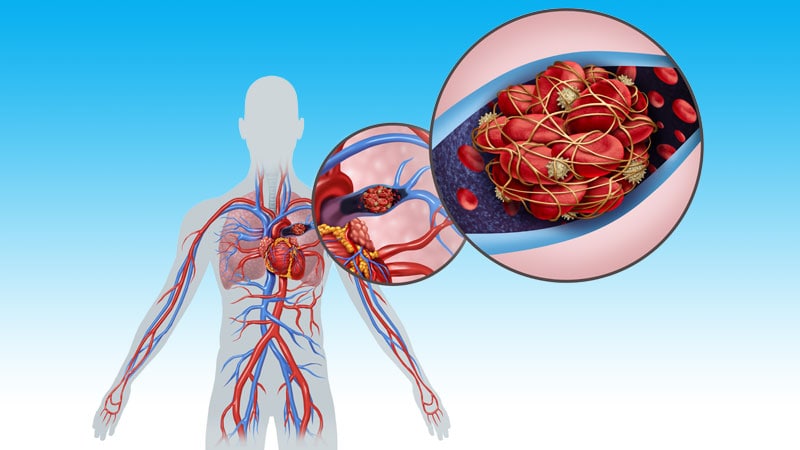 A new study may help doctors assess the long-term risk for major bleeding if anticoagulation for unprovoked venous thromboembolisms (VTE) is continued beyond 3-6 months.

The meta-analysis of data from 27 studies with 17,202 patients was published in the Annals of Internal Medicine. According to two of the paper’s coauthors, Faizan Khan, MSc, and Marc A. Rodger, MD, it “provides best available estimates of long-term bleeding risk with different anticoagulants in patients with unprovoked VTE,” including subgroups at increased risk.

Patients at increased risk for major bleeding include those who are older; those using antiplatelet therapy; and patients with kidney disease, a history of bleeding, or anemia, noted the coauthors, who work for the Ottawa Hospital Research Institute.

The researchers focused on randomized controlled trials (RCTs) and prospective cohort studies that reported major bleeding among patients with a first unprovoked or weakly provoked VTE who received oral anticoagulation for at least 6 months beyond an initial anticoagulant treatment course of at least 3 months.

The investigators analyzed data from 14 RCTs and 13 cohort studies. In all, 9,982 patients received a vitamin K antagonist (VKA), and 7,220 received a direct oral anticoagulant (DOAC).

Risks of Serious Bleeding “Not Trivial”

Margaret Fang, MD, with the University of California, San Francisco, agreed that the study can help clinicians and patients weigh the risks of extended anticoagulation for common types of VTE.

The study also “highlights that the risks of serious bleeding are not trivial” and points out gaps in the literature regarding the long-term use of DOACs for extended VTE therapy, Fang said.

Better ways to predict which patients will develop bleeding on anticoagulants are needed, Fang added. “It will also be important to establish which of the various therapies for preventing recurrent VTE – full dose versus lowered dose, or even aspirin – has the best balance of safety and efficacy,” she said.

Clinical practice guidelines recommend indefinite anticoagulation for an unprovoked VTE, except when patients are at high risk of bleeding, the authors noted. But clinicians lack a “standardized approach to identify patients at high risk of bleeding,” Khan and Rodger said. “Evidence from randomized trials on net long-term benefit of extended therapy is limited, and current guideline recommendations are largely based on expert consensus opinion. Major bleeding events are two to three times more likely to be fatal than recurrent VTE events, so extended therapy is not always associated with a net mortality benefit, particularly in patients at low risk of recurrent VTE or high risk of bleeding.”

The analysis indicates that there is “a clinically meaningful difference in long-term risk for anticoagulant-related major bleeding among patients with a first unprovoked VTE stratified according to presence or absence of the following risk factors: age older than 65 years, creatinine clearance less than 50 mL/min, history of bleeding, concomitant use of antiplatelet therapy, and hemoglobin level less than 100 g/L,” the authors said.

For example, the researchers found that the incidence of major bleeding was higher among those older than 65 years, compared with younger patients (incidence rate ratio, 1.84 with VKAs and 2.92 with DOACs), and among those with creatinine clearance less than 50 mL/min (IRR, 2.83 with VKAs and 3.71 with DOACs).

The case-fatality rate of major bleeding was 8.3% with VKAs and 9.7% with DOACs.

The study received funding from the Canadian Institutes of Health Research. Some of the coauthors are employees of or have financial ties to pharmaceutical companies. Khan, Rodger, and Fang had no relevant disclosures.