LOS ANGELES — The inmates huddled near the front or lingered on the bunk beds lining both sides of their narrow, crowded dorm at the Men’s Central Jail, listening as Lt. Sheriff Dwight Miley and nurse practitioner Marissa Negrete offered them covid vaccinations and answered their questions.

Those who wanted the vaccine should line up at the door, Miley and Negrete said. They’d be taken into a short, cramped hallway where medical workers waited with loaded syringes.

The shot wasn’t mandatory, Miley said, but he encouraged them to get it by dangling a carrot that might seem odd to someone on the outside: Being vaccinated would help them get transferred more quickly to state prison. 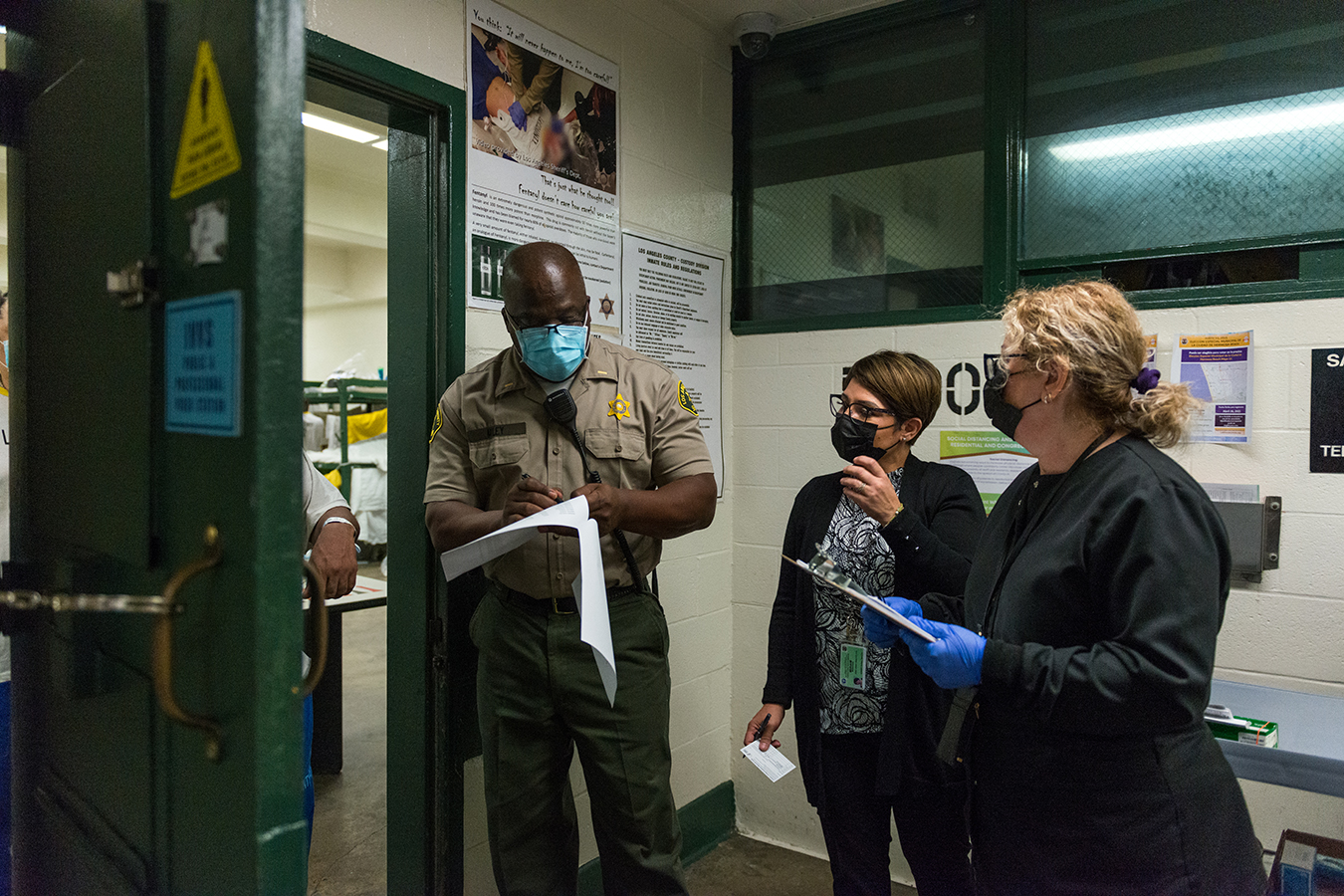 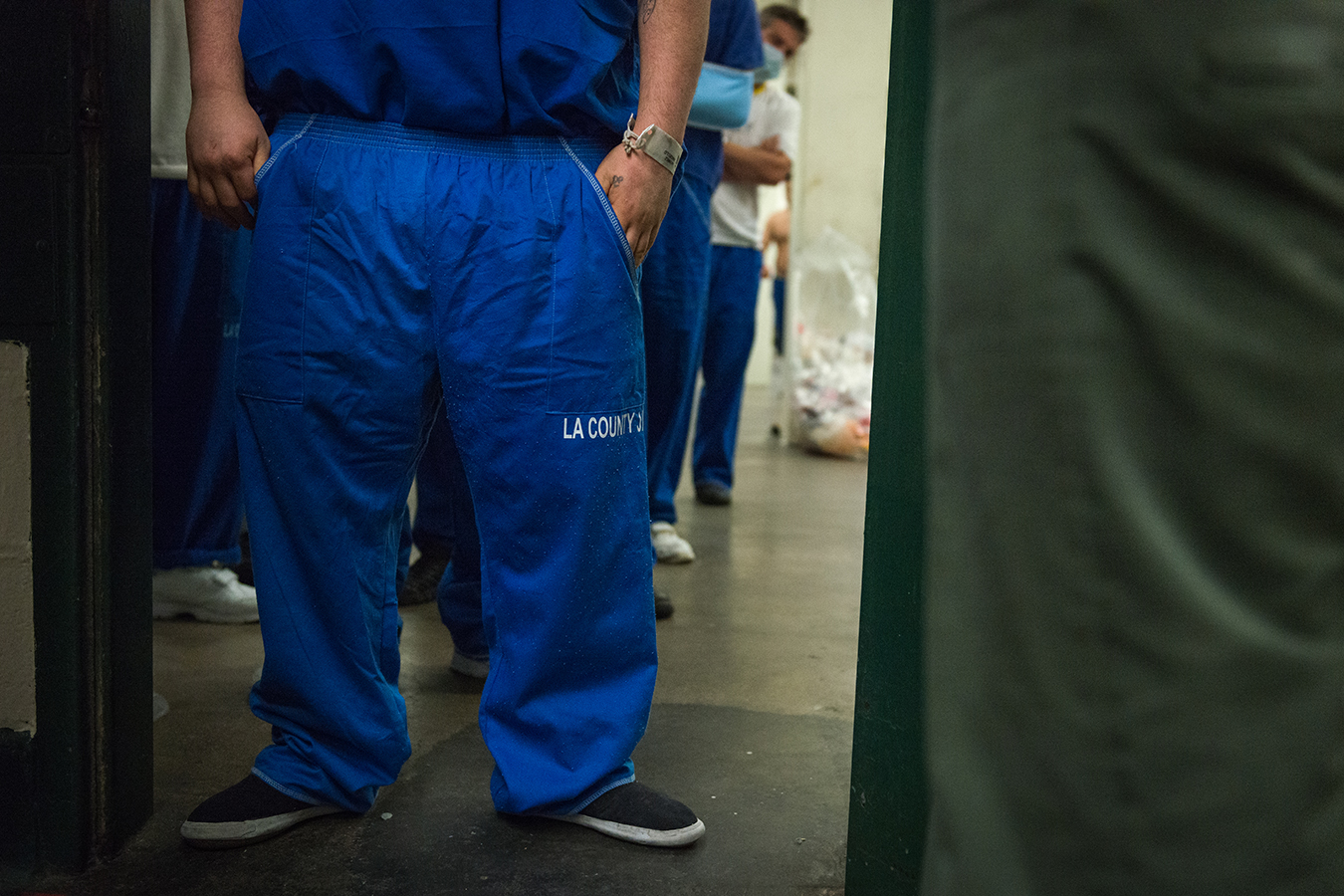 Many people who have been convicted and sentenced to long terms in state prison are eager to get there. But because of covid, transfers from county jails to the state prison system have slowed significantly in the past year.

Jails and prisons have been virtual covid petri dishes: The infection rate among the nation’s prisoners is more than five times higher, and the mortality rate three times higher, than among the general population.

Among the Los Angeles County inmates who agreed to be vaccinated, a common incentive was that they believed — in line with Miley’s urgings — it would get them to state prison sooner.

“I took the vaccine to go upstate quicker,” said Anthony Contreras, 29, who has been in the jail for three years and was sentenced in February to a term of 15 years to life for attempted murder. Arturo Mendoza, 42, sentenced to six years in prison for illegal firearms possession, said he got the injection to avoid getting sick, but added: “I prefer to be upstate because the living is better.” 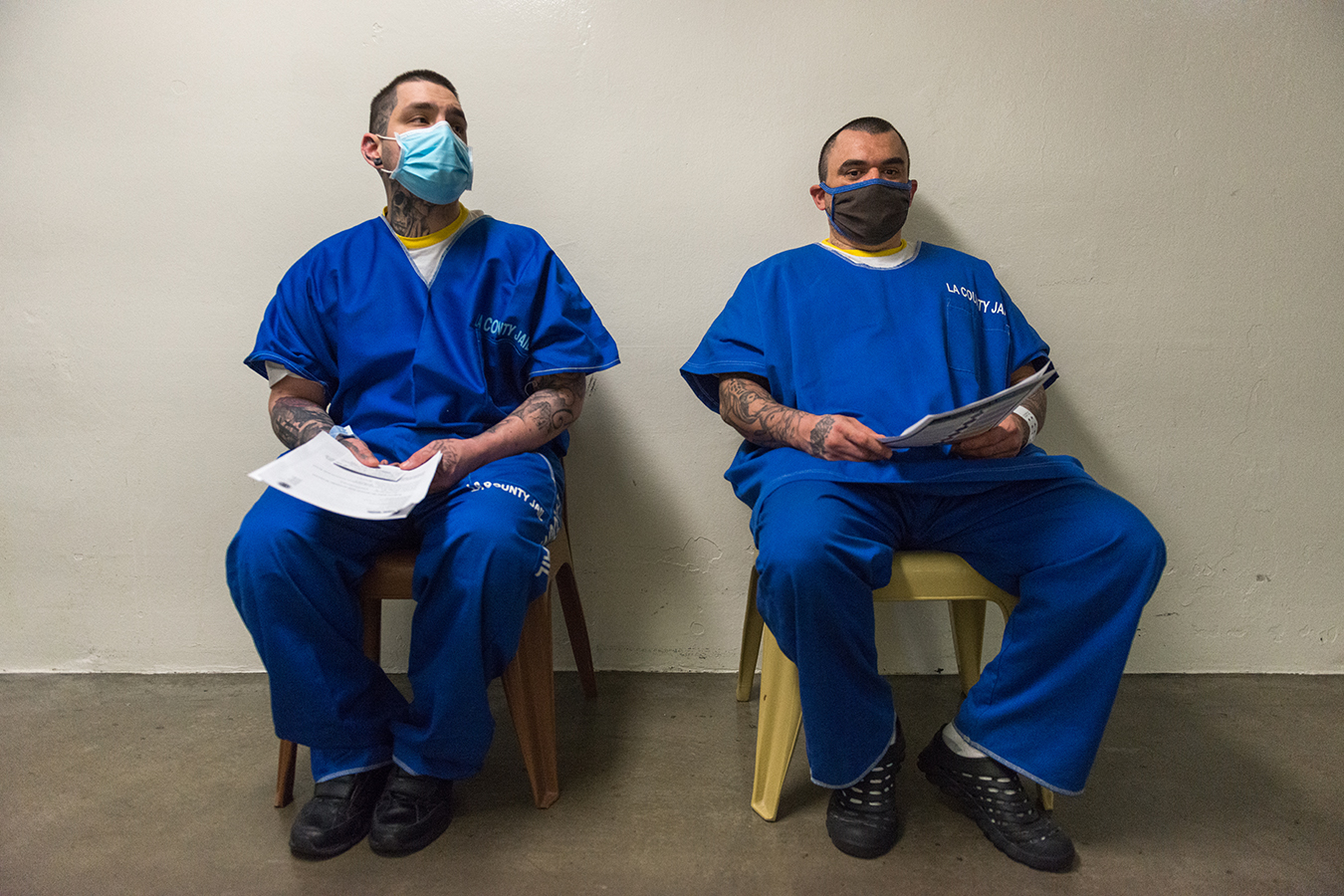 However, being vaccinated will not necessarily get inmates to state prison faster, said Vanessa Nelson-Sloane, director and founder of Life Support Alliance, an advocacy group for life-term prison inmates. Decisions on sending county jail inmates to state prison are based more on legal factors than vaccination status, she said.

One reason L.A. County inmates want to expedite their transfer is that state prisons are once again open for family visits after a 13-month halt, while the jail is still closed to visitors.

Moreover, prisons offer numerous courses and vocational programs, and prisoners who enroll in them can get time shaved off their sentences, Nelson-Sloane said.

In the Los Angeles County Jail system — the biggest in the nation, with an average of over 15,000 inmates on a given day — 4,313 inmates have tested positive for covid since the pandemic started. That’s more than any jail system or individual prison in the United States, though not the highest per capita rate, according to UCLA’s COVID-19 Behind Bars Data Project.

Men’s Central Jail, the largest and oldest of the seven county-run detention facilities, has seen the highest number of those cases. 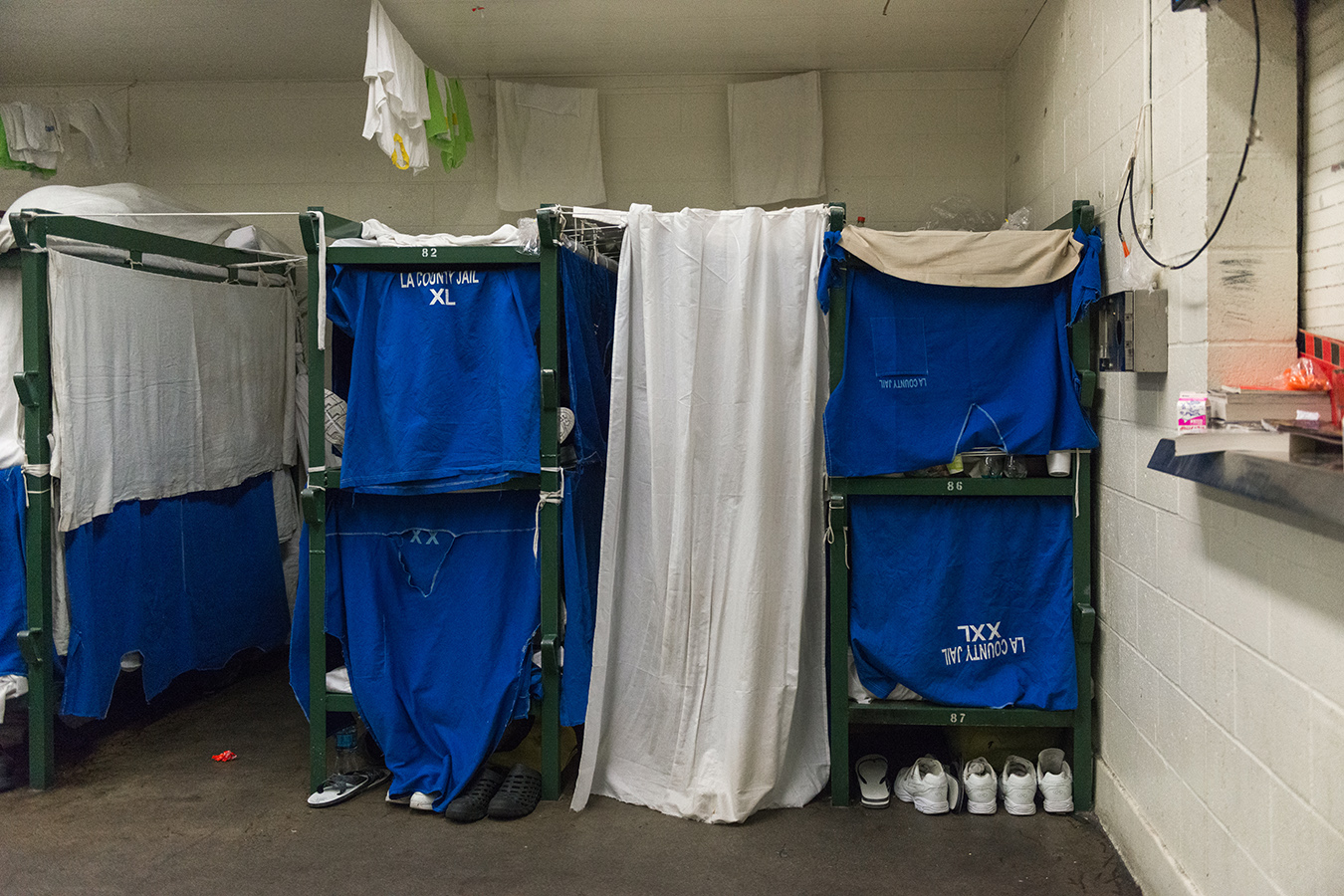 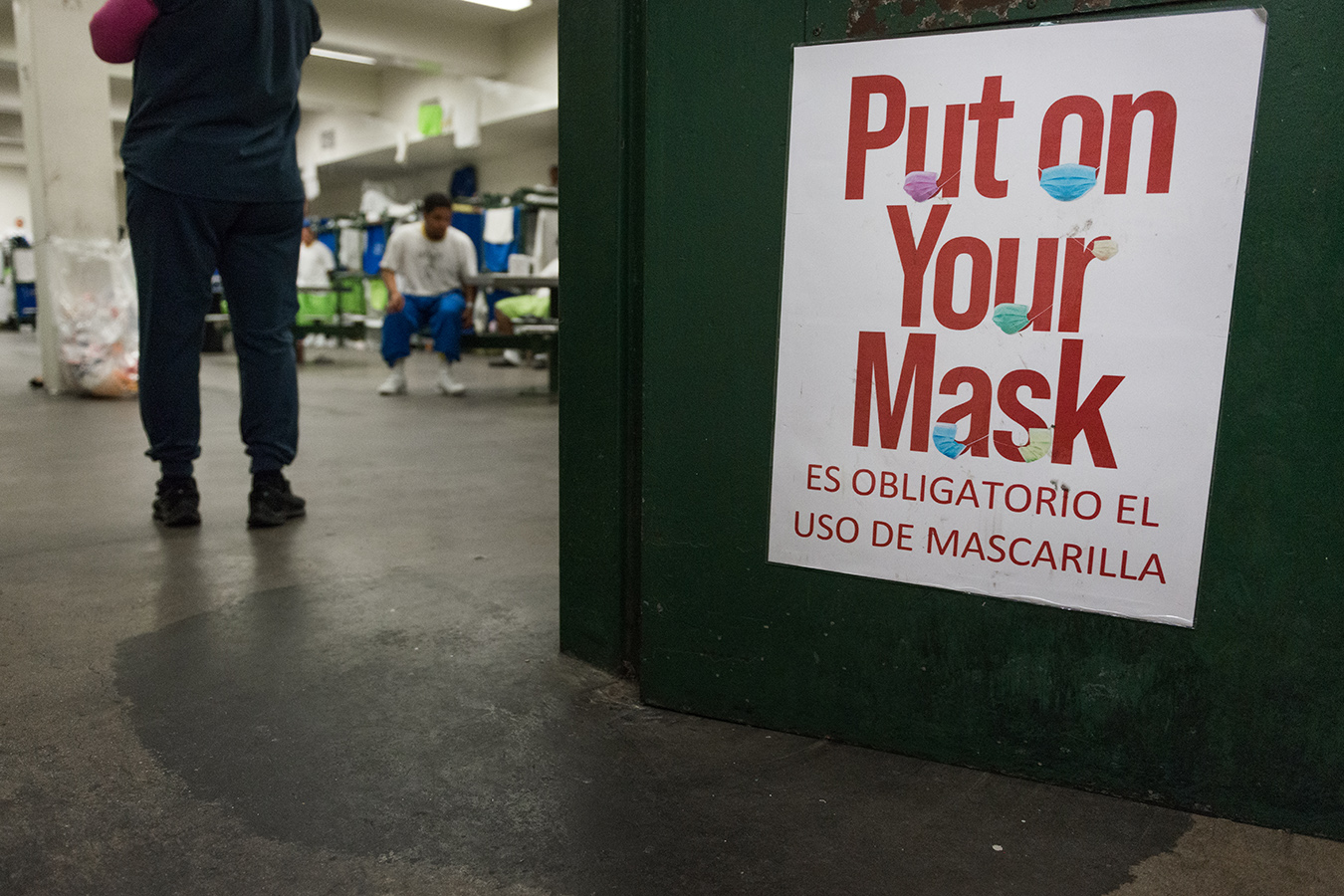 For the first couple of months this year, the jail administered the Moderna vaccine, which requires two shots about a month apart. That created added anxiety for certain inmates and logistical complexity for the medical team, since the jail has high turnover and many incarcerated people leave before receiving a second dose.

When the jail started getting bigger shipments of the Johnson & Johnson vaccine, which requires only one shot, the medical staff and many of the inmates were happy about it.

“Johnson & Johnson is our preferred vaccine,” said Dr. Sean Henderson, chief medical officer of L.A. County’s Correctional Health Services. “Given that they are often in my care for such a short period of time, and given the fact that it appears Johnson & Johnson has the same long-term efficacy in terms of keeping you from becoming ill or dying, Johnson & Johnson does make more sense for our patient population.”

Several of the inmates said they had initially declined when they were offered the two-shot Moderna vaccine but changed their minds with the option of a single shot. 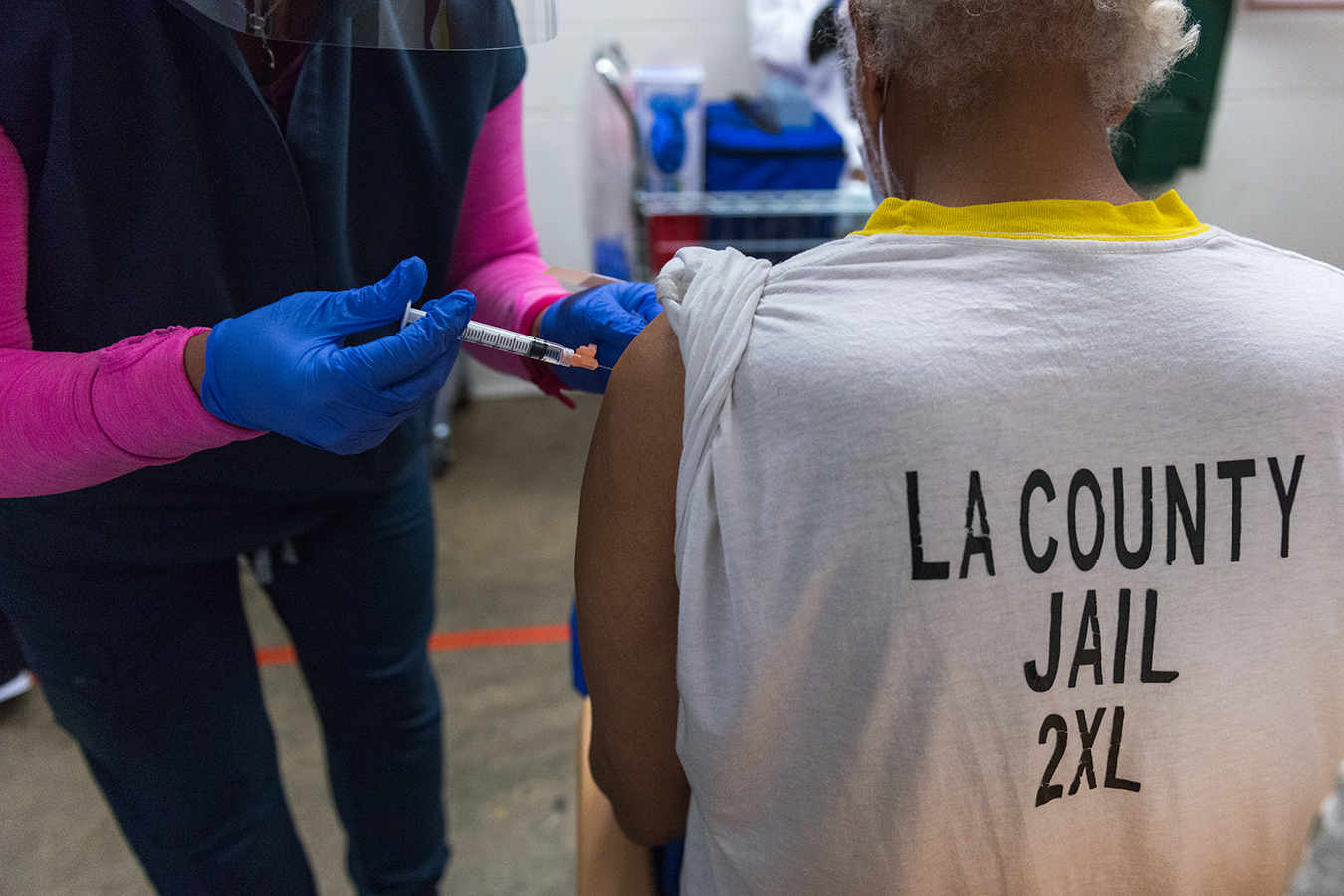 On April 13, federal health officials recommended suspending use of the single-shot vaccine over concerns about a possible link to a rare type of blood clot. For the next 10 days, the county’s jails were giving only Moderna, but the Johnson & Johnson suspension was lifted Friday.

So far, just over 4,000 L.A. County Jail inmates have been fully vaccinated, Henderson said — about 26% of the jail system’s average daily population. That compares with 60% in the California state prison system.

But county jails have much higher turnover rates than state prisons, and Henderson’s team has not vaccinated as many of the short-term inmates as it would like.

Instead, the medical team has been targeting longer-term inmates, including those awaiting transfer to state prison and nonviolent prisoners who have been returned by state prisons to serve the rest of their sentences in county jail. 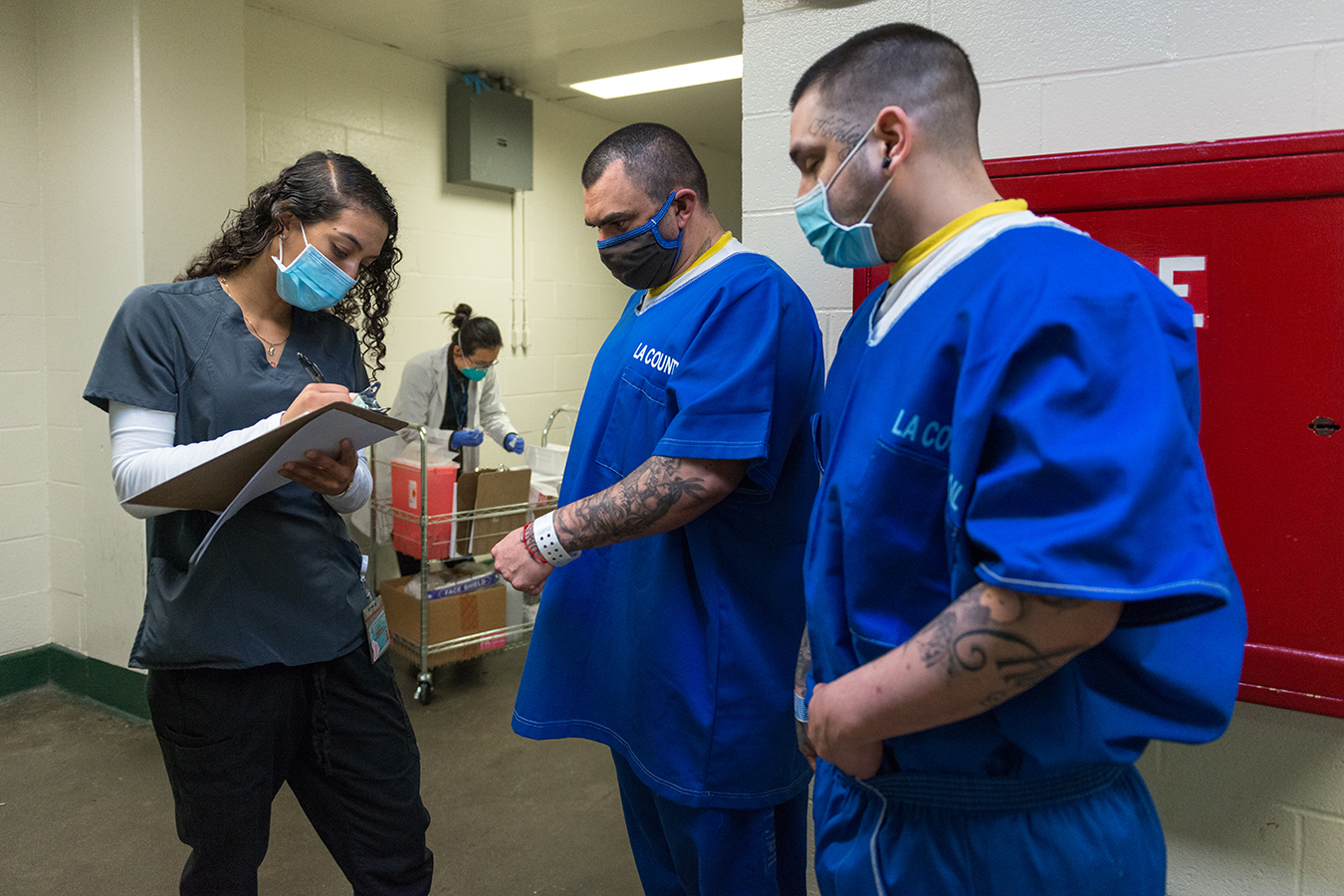 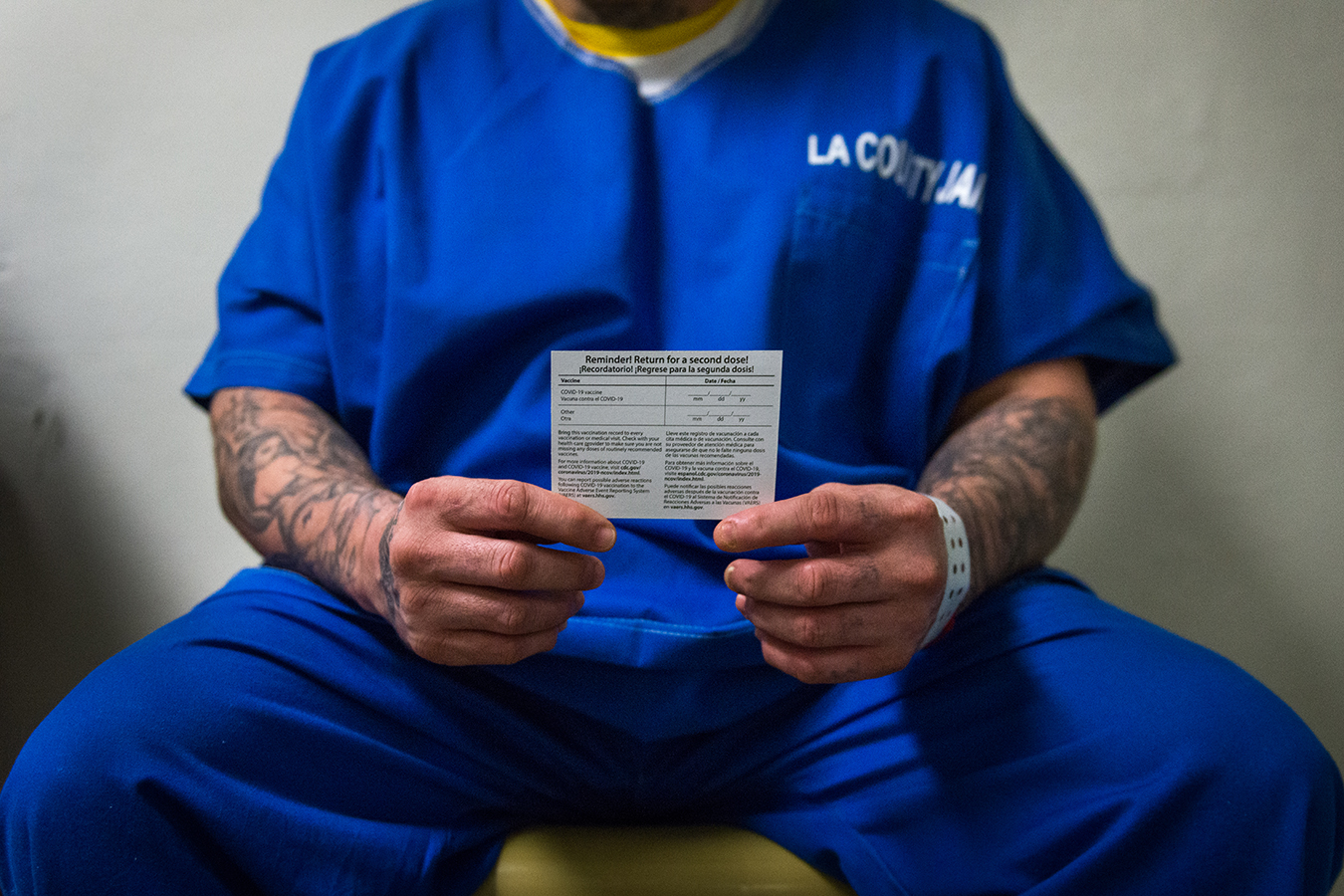 Despite the high risk of infection among incarcerated people, California granted vaccine access to them more slowly than to some other high-risk groups, including nursing home residents and seniors. Officials in the Golden State did not start vaccinating all jail and prison inmates, regardless of age or health status, until March 15.

Florida delayed even longer, blocking vaccine access to prisoners until the first week of April.

The crowded, unsanitary conditions in which inmates typically live make them highly susceptible to infection, and their high rate of chronic diseases puts them at greater risk of severe covid illness. Jails and prisons are disproportionately populated by Latino and Black men, who have been hardest hit by the pandemic. In the L.A. County correctional system, 31% of prisoners are Black and 53% are Latino.

Now that jail officials have the green light to vaccinate all inmates who want to be vaccinated, they face another challenge: vaccine hesitancy.

Henderson said about half of L.A. County Jail inmates decline when asked if they want the vaccine, though some change their minds after repeated offers. 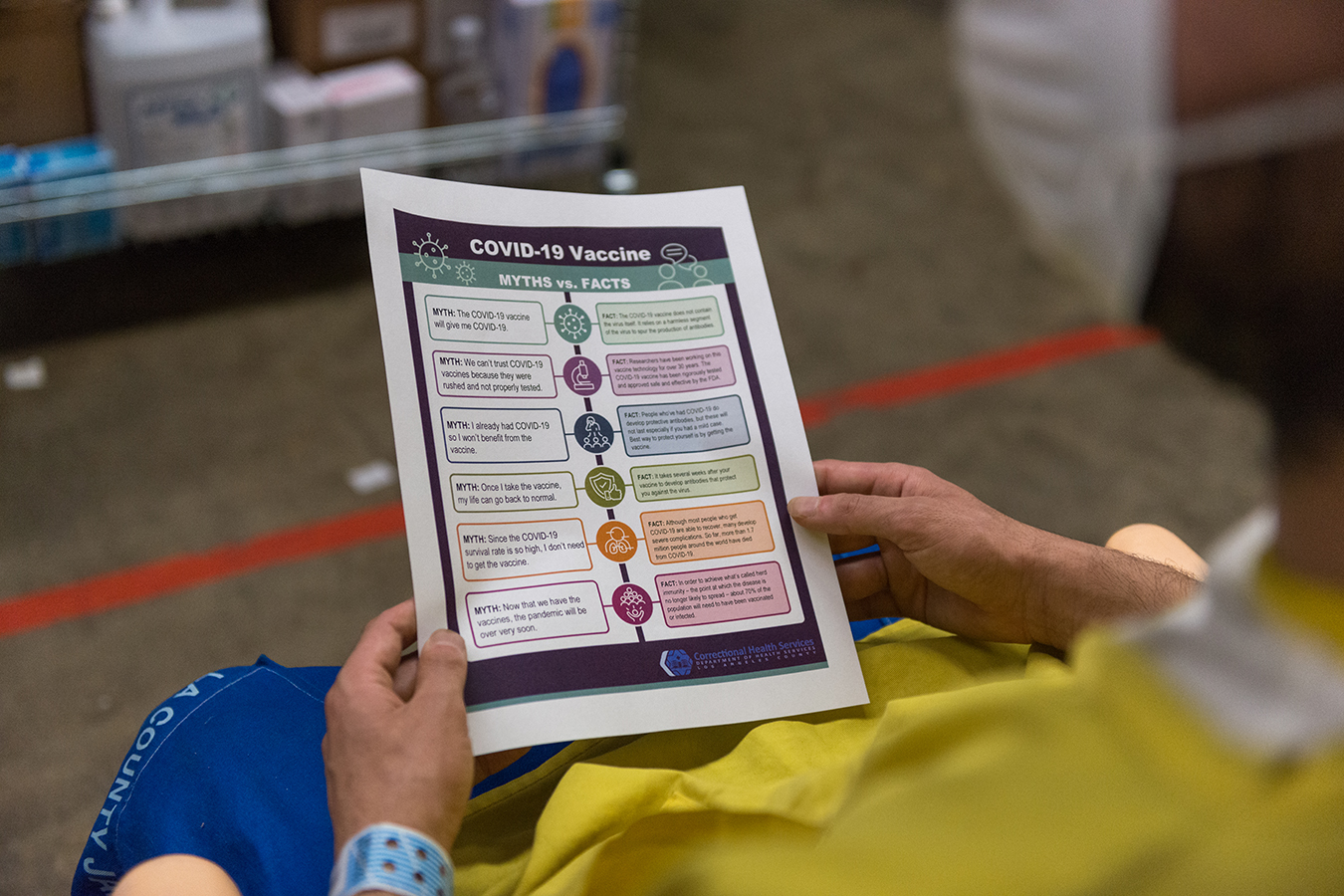 A survey published in December by the Centers for Disease Control and Prevention found that 55% of jail and prison inmates would hesitate or refuse to take the vaccine. Willingness to be vaccinated was lowest among Black prisoners and people ages 18 to 29. The most common reason for refusal was distrust of government and other institutions.

Andre Moore, a 33-year-old inmate in the Men’s Central Jail who said he was wrongly convicted of sexual assault and sentenced in October 2019 to a long term in state prison, refused the vaccine because “I don’t think anything the government does is good.”

Living in a crowded dorm with inmates who are less meticulous about hygiene than he is, and where many don’t wear masks, makes him worry about getting covid. “But I’m way more nervous about the vaccine,” Moore said.

Sharon Dolovich, a UCLA law professor who created the COVID-19 Behind Bars project, said corrections officials need to try to instill trust in the inmates. “With this population, you can’t just go in and say, ‘Here’s the vaccination, take it,’” she said. “There’s a lot of distrust and resentment and fatalism.”