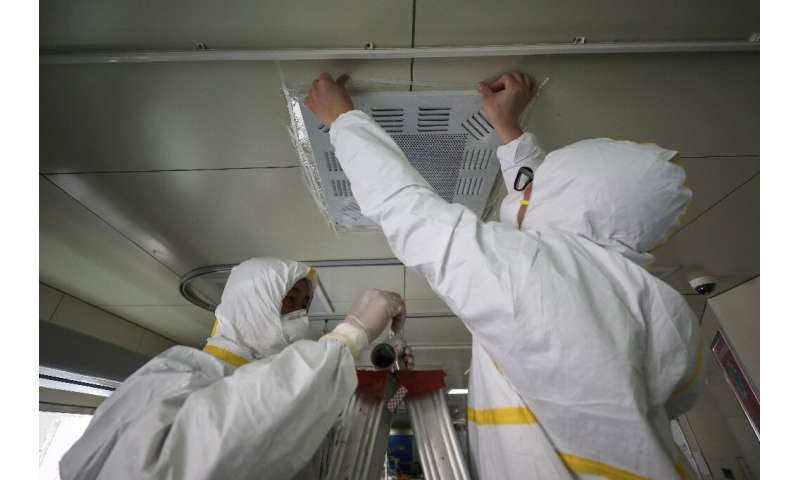 Scientists have known for several months the new coronavirus can become suspended in microdroplets expelled by patients when they speak and breathe, but until now there was no proof that these tiny particles are infectious.

A new study by scientists at the University of Nebraska that was uploaded to a medical preprint site this week has shown for the first time that SARS-CoV-2 taken from microdroplets, defined as under five microns, can replicate in lab conditions.

This boosts the hypothesis that normal speaking and breathing, not just coughing and sneezing, are responsible for spreading COVID-19—and that infectious doses of the virus can travel distances far greater than the six feet (two meters) urged by social distancing guidelines.

The results are still considered preliminary and have not yet appeared in a peer-reviewed journal, which would lend more credibility to the methods devised by the scientists.

The paper was posted to the medrxiv.org website, where most cutting-edge research during the pandemic has first been made public.

The same team wrote a paper in March showing that the virus remains airborne in the rooms of hospitalized COVID-19 patients, and this study will soon be published in a journal, according to the lead author.

“It is actually fairly difficult” to collect the samples, Joshua Santarpia, an associate professor at the University of Nebraska Medical Center told AFP.

The team used a device the size of a cell phone for the purpose, but “the concentrations are typically very low, your chances of recovering material are small.”

The scientists took air samples from five rooms of bedridden patients, at a height of about a foot (30 centimeters) over the foot of their beds.

The patients were talking, which produces microdroplets that become suspended in the air for several hours in what is referred to as an “aerosol,” and some were coughing.

The team managed to collect microdroplets as small as one micron in diameter.

They then placed these samples into a culture to make them grow, finding that three of the 18 samples tested were able to replicate.

For Santarpia, this represents proof that microdroplets, which also travel much greater distances than big droplets, are capable of infecting people.

“It is replicated in cell culture and therefore infectious,” he said.

Why we wear masks

The potential for microdroplet transmission of the coronavirus was at one stage thought to be improbable by health authorities across the world.

Later, scientists began to change their mind and acknowledge it may be a possibility, which is the rationale for universal masking.

The World Health Organization was among the last to shift its position, doing so on July 7.

“I feel like the debate has become more political than scientific,” said Santarpia.

“I think most scientists that work on infectious diseases agree that there’s likely an airborne component, though we may quibble over how large.”

Linsey Marr, a professor at Virginia Tech who is a leading expert on aerial transmission of viruses and wasn’t involved in the study, said it was rare to obtain measurements of the amount of virus present in air.