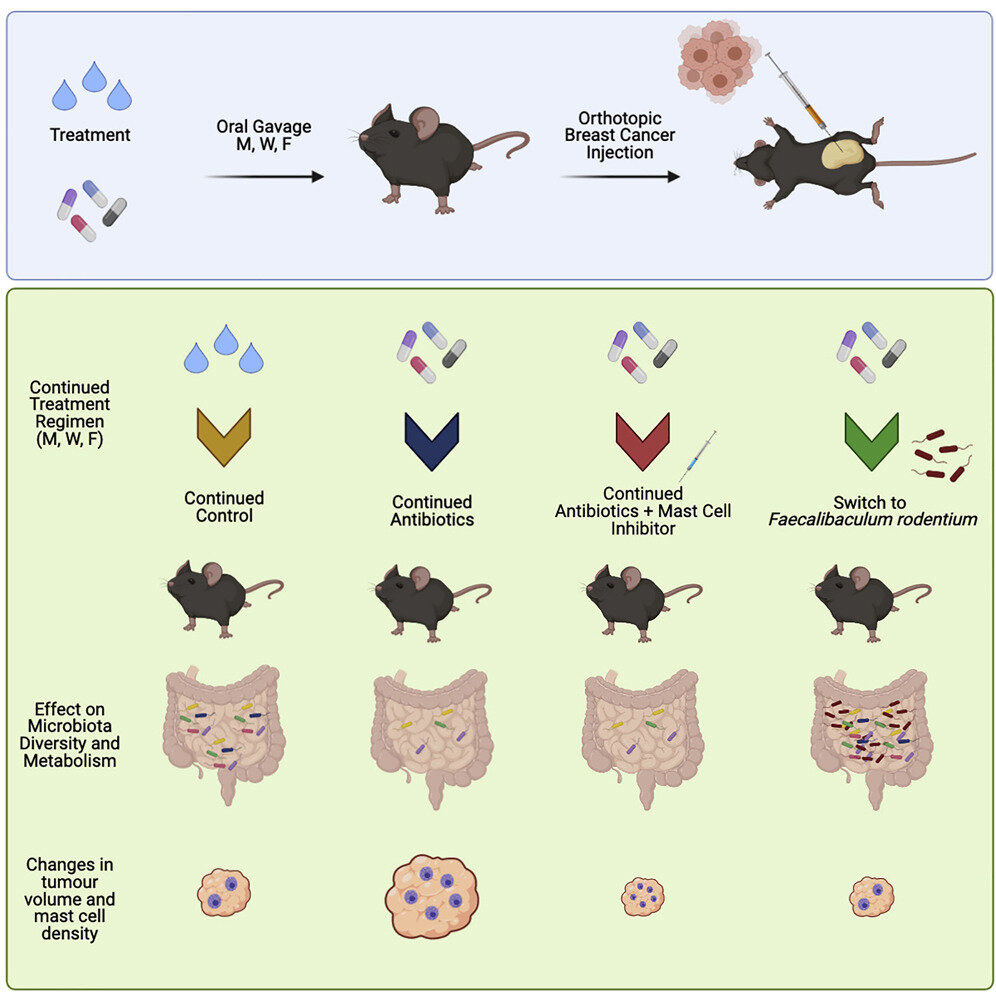 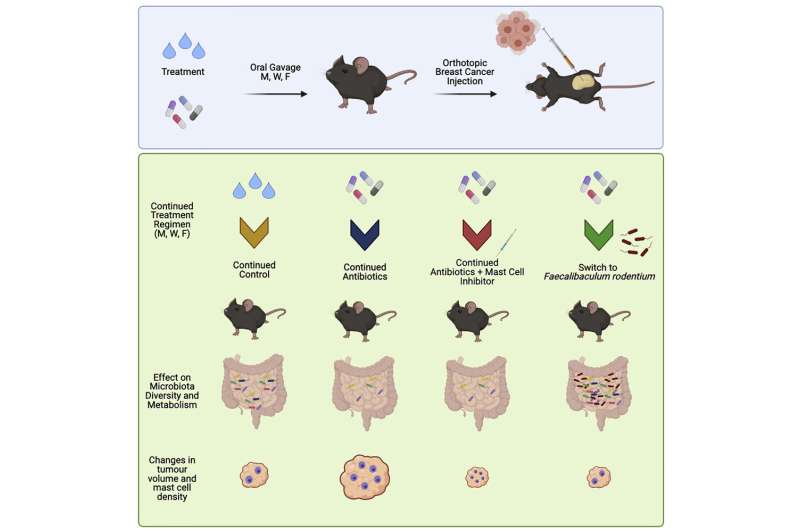 Leading scientists have identified a possible link between antibiotic use and the speed of breast cancer growth in mice, and identified a type of immune cell that could be targeted to reverse it.

In a new study funded by Breast Cancer Now, researchers from UEA and the Quadram Institute found that treating mice with broad-spectrum antibiotics increased the rate at which breast cancer tumors grew in them.

They also observed an increase in the size of secondary tumors that grew in other organs when the cancer spread.

Led by Dr. Stephen Robinson, Group Leader at the Quadram Institute and Research Leader at UEA, the team used a cocktail of five antibiotics, and broad-spectrum antibiotic cefalexin on its own, to investigate how disrupting a healthy balance of bacteria in the gut affected breast cancer growth in mice.

The researchers discovered that the use of antibiotics led to the loss of a beneficial bacterial species, which in turn sped up tumor growth.

Through further investigation, the team also found that a type of immune cell, known as mast cells, were found in larger numbers in breast cancer tumors in mice treated with antibiotics. Blocking the function of these cells also reversed the effect of antibiotics and reduced the aggressive growth of the tumors.

It is hoped that these results could lead to a refinement of antibiotic use in people affected by breast cancer, and the development of new ways to counteract the negative effects that certain antibiotics could have on breast cancer.

This is important as while chemotherapy is a cornerstone of breast cancer treatment it reduces the number of white blood cells in the blood, making people more susceptible to infection. Antibiotics are therefore often prescribed to breast cancer patients to control any infections that arise during chemotherapy treatment.

Dr. Stephen Robinson, Group Leader at the Quadram Institute and Research Leader at UEA’s School of Biological Sciences, said: “With the rise in bacteria resistance to antibiotics we have known for many years that we need to be very careful about clinical antibiotic use.

“Our research has shown that losing ‘good’ bacteria in the gut, as the result of antibiotic use, can lead to an increased rate of breast cancer growth.

“We believe there is a complex immune element to this mechanism involving mast cells, a type of cell whose role in many cancers is not yet fully understood. Therefore, future studies will focus on understanding the possible role of these cells as well as looking into the effects of introducing probiotics into the experimental models we use.”

Breast cancer is the most common cancer in women in the UK, with around 55,000 women and 370 men being diagnosed in the UK each year. Secondary (or metastatic) breast cancer occurs when primary breast cancer cells spread from the breast, through the lymphatic or blood system to other parts of the body.

It is not currently known how many people have secondary breast cancer, but it is estimated that 35,000 people in the UK are living with this devastating incurable disease, and the fear and uncertainty of when it will cut their lives short.

In this new research, published in iScience, Dr. Stephen Robinson and Ph.D. student Alastair McKee discovered that breast tumors grew faster in mice that were given antibiotics, compared to mice that didn’t receive antibiotic treatment. This effect was observed in mice models of the disease representing several different types of breast cancer.

The team further investigated the changes that treatment with antibiotics leads to and noticed that mice that were treated with antibiotics had an increased number of mast cells in breast tumors.

The researchers found that cromolyn, a substance that stops mast cells from working and is used to treat some other health conditions, reduced tumor growth in the antibiotic-treated mice, but not in the control group. This provides evidence that mast cells could be involved in the faster growth of breast cancer that arises from antibiotic use.

Researchers will now investigate further to understand where the increase of mast cells comes from, and why the disruption of the gut bacteria causes an increase in mast calls.

Dr. Simon Vincent, Director of Research, Support and Influencing at Breast Cancer Now, said: “One woman is diagnosed with breast cancer every 10 minutes in the UK and we urgently need to find new ways to treat patients and prevent more people dying from this devastating disease. This cutting-edge research gives us vital new knowledge into how breast cancer tumors can grow.

“We’re proud to have funded this research, especially at a time when the COVID-19 pandemic has profoundly impacted our world-class research—we’ve been less able to fund new research that could transform the lives of people affected by breast cancer. This is why your support is more critical now than ever before in helping us to continue to bring hope for the future through our research.”