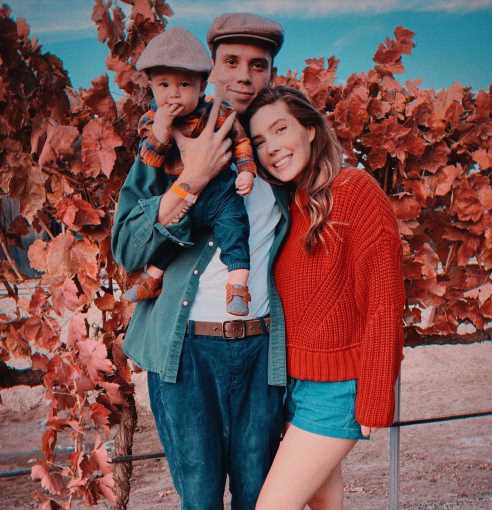 Becoming a dad is a big step, especially when you're in a boy band. But for Austin Porter of PRETTYMUCH, it was nothing short of a blessing.

Last May, Porter shocked fans when he shared the news that he had welcomed a baby boy named Theodore Hudson William Porter. Posting a photo of the newborn then, he wrote, "I know you guys will have questions, and I can't wait to share with you what we've been through."

The post sent fans into a frenzy as they wondered what Porter becoming a dad would mean for the future of PRETTYMUCH, the boy band he comprises with Brandon Arreaga, Nick Mara, Zion Kuwonu and Edwin Honoret. But through it all, the 23-year-old says he was glad to have open communication with his "brothers" — as Porter calls them — to come up with the best way forward as he delved into fatherhood. In a candid interview, Porter and his girlfriend Ansley Mitchell open up to PEOPLE about young parenthood and what it was like to welcome baby Theo, now 9 months old, during the pandemic.

"Creeping up to my due date, he had a tour planned. At the time, we figured we wouldn't go to any of the shows because Theo was going to be so young," says Mitchell, 20. "But then obviously when it got canceled, I was selfishly happy that Austin got to stay home."

"I think I was a little selfishly happy as well. But at the same time, it would have been fun to go on tour," Porter says. "Everything happens for a reason. It gave me time to adjust to being a father and get very slowly back into doing everything else as well."

For Mitchell, becoming a mom was something she always wanted. "I was confident in my ability to be a mom," she says. Since turning 18, she had worked at daycares and around kids and felt comfortable with them. So for the couple, getting pregnant wasn't too much of a surprise. "I was excited to be the same thing that my dad was: a very good, supportive father," Porter says.

And although he was looking forward to welcoming his son, he admits that he had to think hard about what being a dad meant for his ever-growing musical career.

"If I'm going to be really, really raw and honest, there was definitely a moment where, in a time of weakness, I thought [that I had to leave the band]," Porter says. "Like, am I going to drag the boys down? Being in the band, being a dad, is that going to ruin the image? Am I going to make it harder to get things done because of how much time I'm going to want to spend being a good and a present dad?"

"I didn't want the boys' worlds to now have to revolve around me, and slow down their process to success because they're all very talented guys and deserve every ounce of success that they can gain," Porter adds. "To say I didn't have that thought would almost dehumanize me. To me, that was the worst possible outcome — that I would have to leave the band and give up something I enjoyed doing. But I would have done it if it meant giving my son and the people I love, a better life."

Mitchell says she was completely supportive of whatever decision Porter would make. Ultimately, he decided it was right for him to stay, even if he needed to have that difficult conversation with his groupmates. First, he talked to Mara, who's closest to him in age and has "always been my rock in the group."

"He's someone that I go to first," Porter says. "He helped me clear my thoughts, so I could tell them in a way that they'd take it well."

"Obviously there was a lot of fear there. All the guys took a day for shock, but they weren't ever negative," he adds. "There was never a 'Why did you do this? This wasn't smart.' It was always just, 'If you think you can do it, we're going to back you up 100%, no matter what.' And that to me, is what every family member should say, no matter how they really feel about the situation."

For the PRETTYMUCH boys, adjusting to Porter being a dad has been mostly seamless. They're just excited to see little Theo grow.

"It's crazy. It's a whole 'nother chapter in life," Arreaga says. "That's a mini Austin."

Part of that process was Porter leaving the house where the boys live to be with Mitchell and Theo.

Want to get the biggest stories from PEOPLE every weekday? Subscribe to our new podcast, PEOPLE Every Day, to get the essential celebrity, entertainment and human interest news stories Monday through Friday.

"It was always a mutual agreement," Porter clarifies about leaving the PRETTYMUCH home. "I didn't want to keep them up all night with the kid. That's not fair to them. And that also changes every aspect of their lifestyle, which they didn't ask for. It's not on them to now have to change their lives because of me. You know what I mean?"

Aside from the challenges of balancing being in the group, Porter and Mitchell say they've also had to deal with those who judge the couple for welcoming a baby so young.

"It was cold outside and it was drizzling a little bit, and I had him bundled up in a blanket and in a jacket and everything, and he just didn't have a hat on because he's weird about putting things on his head," Porter remembers. "And this lady walks up to me and goes… 'You probably should bundle up your son a little bit more.' Just because she knew how young I was as a dad, she didn't think I knew how to take care of my son."

"I felt angry about it, but also at the same time, she probably grew up in a generation where that's what she was taught to believe — that you couldn't do things young," he adds. "And instead of fighting back in that moment, I was like, I'm going to take the high road and just prove to people that being a good, young parent is completely, absolutely possible." And Mitchell and Porter are doing exactly that.

Life with a 9-month-old is a real trip for the young parents and they're lucky to have the support of Theo's grandmas. (It also seems like Theo is happy his daddy stayed with PRETTYMUCH!)

"He's obsessed with 'Stars,' the music video," says Mitchell, referring to the lead single of the group's "Smackables" EP.

"Literally, his favorite thing," Porter says with a laugh. "I just think it's hilarious that it had to be 'Stars' because I wasn't the first person to show him the video, it was actually his grandma, and then she got him obsessed with it."

Baby Theo also seems to get the dancing and music genes from mom and dad (Mitchell used to be a competitive dancer.)

"We have this door jumper where he can just jump around," says Mitchell. "We'll turn on music videos for him all day long, and he finds the beat in every song. He jumps right on the beat. Slow songs, fast songs. It's so crazy."