Nearly one in five older adults say their mental health has gotten worse since the pandemic began in March 2020, and an equal percentage say their sleep has suffered in that time too. More than one in four say they’re more anxious or worried than before the COVID-19 era, according to a new poll of people age 50 to 80.

Women, people in their 50s and early 60s, and older adults who have a college degree or higher were more likely than others to report worse mental health than before the pandemic, according to the new findings from the National Poll on Healthy Aging. Older adults who say their physical health is fair or poor were most likely to report worse mental health, with 24% saying this.

And when asked about the last two weeks before they were surveyed, the percent who said they had concerning mental health symptoms was even higher, with 28% saying they felt depressed or hopeless in that time, 34% saying they’d been nervous or anxious, and 44% saying they’d recently felt stressed.

Just under two-thirds (64%) said they had had trouble falling asleep or staying asleep at least once in the past week, twice the percentage who said this in a 2017 poll of a similar group of older adults.

The poll is based at the University of Michigan’s Institute for Healthcare Policy and Innovation and receives support from AARP and Michigan Medicine, U-M’s academic medical center. It draws from the answers of a national sample of more than 2,000 adults aged 50 to 80 to a poll in late January, when COVID-19 case rates were high across the nation and vaccination of older adults had just begun.

The poll also reveals hopeful signs that many older adults are showing long-term resilience. Two-thirds say their current mental health is excellent or very good. Just over 80% say their mental health is as good as, or better than, it was 20 years ago. 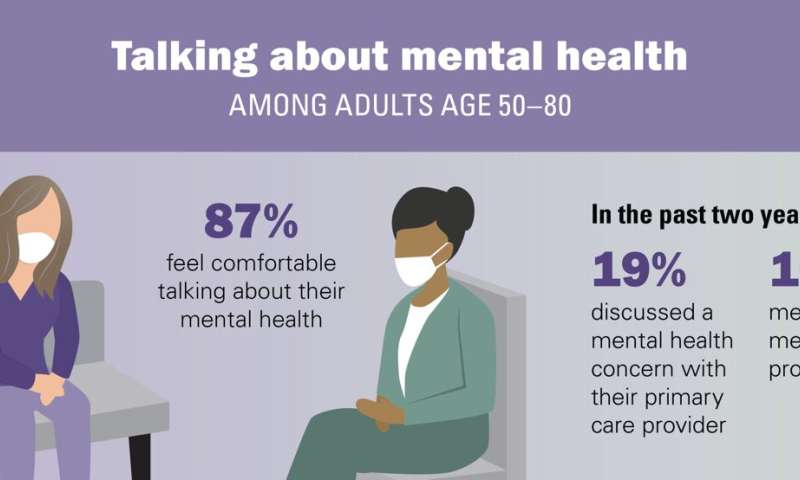 Just under half (46%) of the respondents say they feel isolated, which is down from 56% in a similar poll taken in spring 2020, but up from 28% before the pandemic. Nearly one in three (29%) say that they have made a lifestyle change to improve their mental health since the start of the pandemic such as exercise, diet, and meditation.

“As we enter a new phase of the pandemic, with most older adults getting vaccinated, it’s important to ensure adequate access to mental health screening and care to detect and address any lingering effects of this prolonged period of stress,” says Lauren Gerlach, D.O., M.Sc., a geriatric psychiatrist at Michigan Medicine who worked with the poll team. “This is especally important to those who might have a harder time accessing mental health care, including those with lower incomes and worse physical health.”

The data also suggest that older adults are more open to seeking mental health help than past research might suggest, with 71% saying they wouldn’t hesitate to see a mental health professional in the future, and 13% saying they had talked with their primary care provider about a new mental health concern since the pandemic began.

“It’s encouraging to see that nearly one-third of the older adults rated their primary care provider as the person they’d most want to talk with about mental health concerns, and that 19% said they’d actually done so in the last two years,” she says. “Health systems and insurers should support this role, and efforts to reduce stigma around seeking help for the patients who still feel this way.”

Among the 29% of older adults who said they would hesitate to see a mental health professional for treatment in the future, common reasons were that they thought it wouldn’t help, that they’d feel embarassed or that they had worries about the cost.