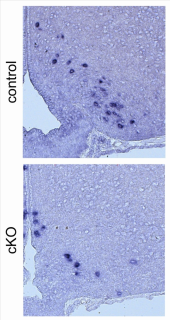 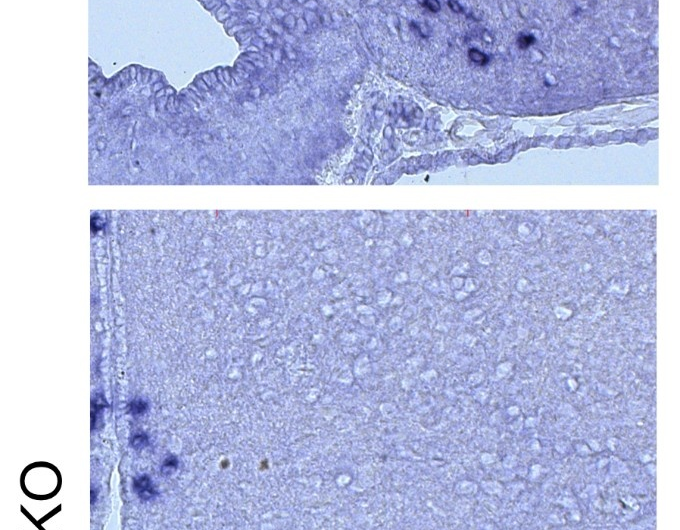 Scientists have known for years that mutations in the MLL4 gene can cause Kabuki syndrome, a rare developmental disorder.

But a study published on Jan. 11 in Nature Communications illuminates new details regarding how this occurs.

The research suggests that MLL4 controls the production of neurons that secrete growth hormone-releasing hormone (GHRH) in a part of the brain called the hypothalamus. Mice without working copies of the MLL4 gene in this area had stunted growth and markedly fewer GHRH neurons. Mice with only one functioning copy of the gene had similar problems.

These are important insights, as GHRH stimulates production of the growth hormone in the pituitary gland in both mice and people. While the effects of Kabuki syndrome vary, delayed growth and short stature are common among patients.

“Given our findings, inactivation of MLL4 is presumed to lead to a loss of GHRH-neurons, resulting in lack of typical growth in Kabuki patients,” says Jae Lee, Ph.D., professor of biological sciences in the University at Buffalo College of Arts and Sciences. “We also researched the epigenetic activity of MLL4, and our studies suggest that MLL4 could be a great epigenetic target molecule to treat various symptoms of Kabuki syndrome.”

“This is the first study that demonstrates roles of MLL4 in fate determination of neuronal cell types during development, a significant advance in our efforts to understand how cell fates are determined epigenetically, an important question remaining to be answered in modern neurobiology,” says Seunghee Lee, associate professor of pharmacy at Seoul National University.

A detailed look at the work of MLL4

For patients, parents and caregivers, new knowledge about the biology of rare diseases provides hope, laying a foundation for the development of treatments, says Jae Lee, who is the parent of a child with a different rare genetic disorder (FOXG1 syndrome).

Though mutations in different genes can lead to Kabuki syndrome, mutations in MLL4 are one of the most common causes of the disorder.

As part of the new study, the team used cutting-edge techniques to investigate the molecular mechanisms by which MLL4 controls the creation of GHRH-neurons in embryonic development in mice. The research shows that MLL4 helps to activate various genes involved in producing GHRH neurons, and finds that a transcription factor called NRF1 is a key partner in this process.

Moreover, the scientists showed that small chemicals that mimic the epigenetic actions of MLL4 can help to restore production of GHRH neurons.