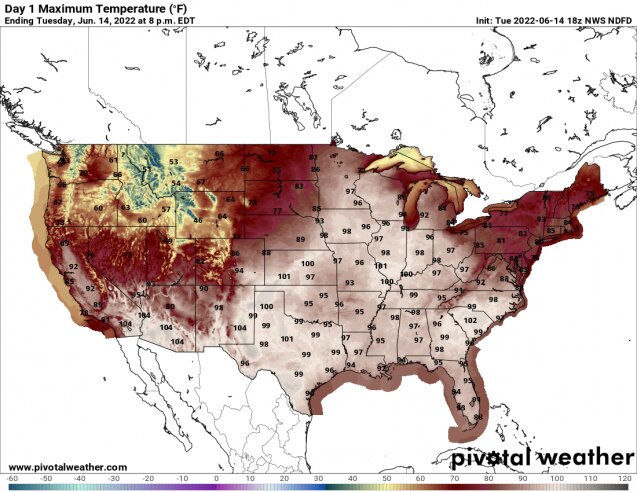 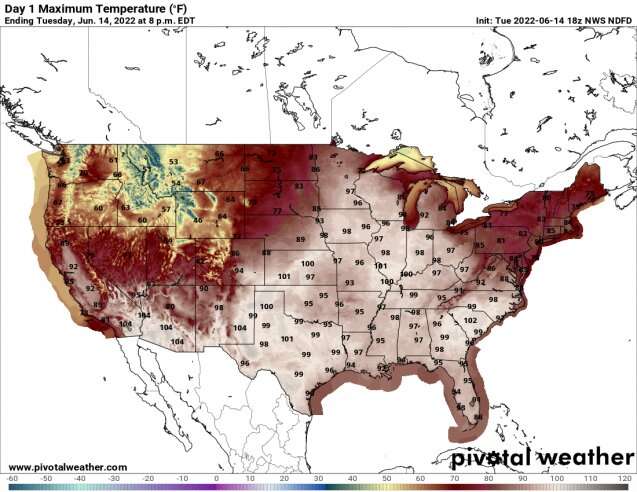 This summer is coming in hot. the New York Times reports that a heat wave caused record-high temperatures this weekend in 16 cities from the Southwest to the Southern Plains. Now, the heatwave is traveling east to the Great Lakes, with more than 100 million Americans under heat alerts, according to the Washington Post. Across large swaths of the country, temperatures are reaching the triple digits.

For many, hot temperatures are a fun excuse to go to the beach. But for vulnerable populations—such as children, outdoor workers, the elderly, and those who can’t afford air conditioning—heat waves like this can be very dangerous.

In fact, heat is the leading weather-related killer in the United States. It is estimated that between 600 and 1,300 Americans die every year as a result of extreme heat—much higher than deaths from hurricanes, which have killed an average of 118 Americans since 2000. Yet hurricanes tend to receive a lot more attention.

What makes heat waves so dangerous? Why do we underestimate their dangers, and what can we do about it? To learn more, State of the Planet spoke with Robbie Parks, an environmental epidemiologist at Columbia University’s Mailman School of Public Health. Parks studies the connections between climate change, weather, and public health.

The dangers of heat waves

A heat wave is a period of unusually hot weather that lasts two days or more. How a heat wave is defined depends on an area’s historical averages.

The most obvious threat of high temperatures is through heat exhaustion or heat stroke. During a heat stroke, the sweat mechanism fails and the body cannot cool down, potentially leading to death or permanent disability.

More common, says Parks, is that stress from high heat exacerbates other health conditions, contributing to deaths from heart attacks, strokes, and other forms of cardiovascular disease. And because high temperatures can worsen air pollution, people with respiratory problems may also suffer.

Over the longer term, heat waves can strain water and energy resources, leading to power shortages and blackouts. They can fuel severe storms and wildfires, and even threaten food security if crops and livestock are damaged.

People who are most vulnerable to the impacts of heat waves include small children, outdoor workers, the elderly, people with chronic diseases, and pregnant women. There is also an environmental justice component, with low-income populations and non-Hispanic Blacks at higher risk from heat waves.

Why we underestimate heat waves

If heat waves are so deadly, why don’t they get as much attention as earthquakes, tsunamis, and hurricanes?

Parks suggests that heat waves may be less evocative because they are less visual phenomena.

“Weather events are usually well defined in people’s memories because of the physical elements,” he says. “If there’s some kind of tsunami or hurricane, you get videos of floods, of big waves or high winds that throw things around. However, with regards to temperature, it is invisible. If you look out the window on a hot day compared with a cold day, it would take an expert really to see a difference.”

There can also be a cultural perception that hot weather is nice weather, he adds, that downplays the dangers of extreme heat.

Could naming heat waves help to save lives? The idea has been debated for years, with some experts suggesting that names could help to increase public awareness and safety measures around heat waves.

Naming and categorizing heat waves wouldn’t come without some complications. For example, unlike hurricanes, which are categorized based on their wind speeds, extreme heat can be defined differently in Arizona versus Oregon. Despite that, Parks thinks the idea is overall feasible and sensible.

“If you can set the appropriate parameters for which a particular heat event warrants being named, and that can activate emergency funding, that is an effective way to do something about it,” he said.

Similarly, Simon Mason, the chief climate scientist at Columbia Climate School’s International Research Institute for Climate and Society, has emphasized the need to design policies around the names and categories, making sure the public understands how to respond to different levels of heat waves. As he told Wired in 2020: “Unless we design management and strategies around this naming convention, we’ll be missing the main point of doing this.”

What works for beating the heat

There are several actions that city, state, and federal governments can take to reduce the dangers of heat waves, both in the short term and long term.

At the local scale, Parks suggested creating block captains who know a neighborhood’s most vulnerable residents and can go around and check on them during a heat wave.

In a study published last year in the Journal of Extreme Events, Parks and his colleagues studied how the combination of COVID-19 and extreme summer heat affected low income communities of color in New York City during the summer of 2020. They identified city-level policies and programs that helped—including setting up cooling centers, providing in-home air conditioners, and planting trees, which can help neighborhoods cool off. Cities can also help by opening swimming pools and ensuring access to public water fountains.

In particular, Parks underlined the need for people to be able to cool off with dignity inside their own homes. He pointed out that while New Yorkers historically see access to heat as a fundamental right during wintertime, home cooling has had relatively little support, even though lack of access can be deadly in both cases.

Even with programs that give away air conditioners, people may need help paying for the energy to use them, said Parks. “Two years ago, in the hot summer of 2020, some vulnerable people were given air conditioning units. Some didn’t use them and some people generally don’t use AC, in particular because of the spiraling electricity costs. And so it’s an energy security issue as well as an environmental justice issue.”

At the higher levels of government and over the long term, implementing sustainable energy infrastructure to power these cooling devices, and to reduce carbon emissions, would also help to battle heat waves, which are getting hotter, longer, and more frequent due to climate change.

Whatever actions are taken, “heat mitigation efforts should fundamentally be through the lens of environmental justice,” said Parks.