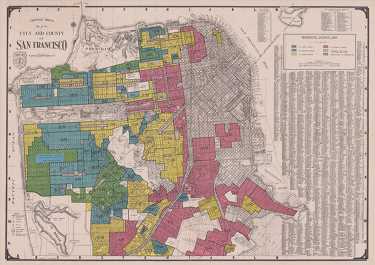 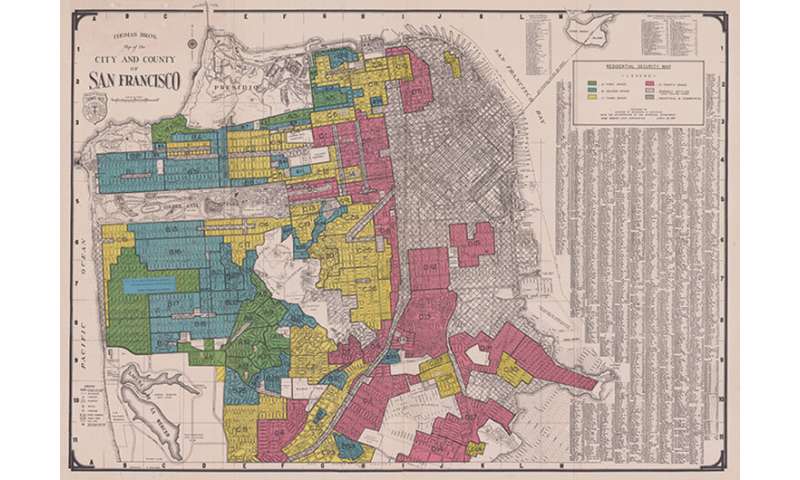 Past discriminatory housing practices may play a role in perpetuating the significant disparities in infant and maternal health faced by people of color in the U.S., suggests a new study by researchers at the University of California, Berkeley.

For decades, banks and other lenders used redlining maps to deny loans to people living in neighborhoods deemed too risky for investment. These maps, first drawn in 1935 by the government-sponsored Home Owners’ Loan Corp. (HOLC), shaded neighborhoods in one of four colors—from green representing the lowest risk to red representing the highest risk. These designations were based, in part, on the race and socioeconomic status of each neighborhood’s residents.

To investigate the link between historical redlining and infant and maternal health today, the team obtained birth outcome data for the cities of Los Angeles, Oakland and San Francisco between 2006 and 2015 and compared them to HOLC redlining maps.

They found that adverse birth outcomes—including premature births, low birth weight babies and babies who were small for their gestational age—occurred significantly more often in neighborhoods with worse HOLC ratings.

“Our results highlight how laws and policies that have been abolished can still assert health effects today,” said Rachel Morello-Frosch, a professor of public health and of environmental science, policy and management at UC Berkeley and senior author of the study, which appeared online this month in the journal PLOS ONE. “This suggests that if we want to target neighborhood-level interventions to improve the social and physical environments where kids are born and grow, neighborhoods that have faced historical forms of discrimination, like redlining, are important places to start.”

Non-Hispanic Black women living in the U.S. are one-and-a-half times more likely to give birth to premature babies than their white counterparts and are more than twice as likely to have babies with a low birth weight. Hispanic women face similar, though less dramatic, disparities, compared to non-Hispanic white women.

While the legacy of public and private disinvestment in redlined neighborhoods has led to well-documented disparities in income level, tree canopy coverage, air pollution and home values in these communities, the long-term health impacts of redlining are just now starting to be explored.

“Children born during the time of our study would be the great-great-grandchildren of those who were alive at the time of redlining, whose options of where to live would have been determined by redlining maps,” said study lead author Anthony Nardone, a medical student in the UC Berkeley-UCSF Joint Medical Program. “We chose to look at birth outcomes because of the stark inequities that exist across race in the U.S. today, inequities that we believe are a function of long-standing institutional racism, like historical redlining.”

Earlier work led by Nardone showed that residents of neighborhoods with the worst HOLC rating were more than twice as likely to visit the emergency room with asthma than residents of neighborhoods with the highest HOLC rating. And a recent study from the Harvard School of Public Health found a link between redlining and preterm births in New York City.

In the new study, the team found that neighborhoods with the two worst HOLC ratings—”definitely declining” and “hazardous”—had significantly worse birth outcomes than those with the best HOLC rating.

This pattern might be attributed to the effects of gentrification on previously redlined neighborhoods, the authors surmised. They added that people in the hardest hit neighborhoods may also rely more on community support networks, which can help combat the effects of disinvestment.